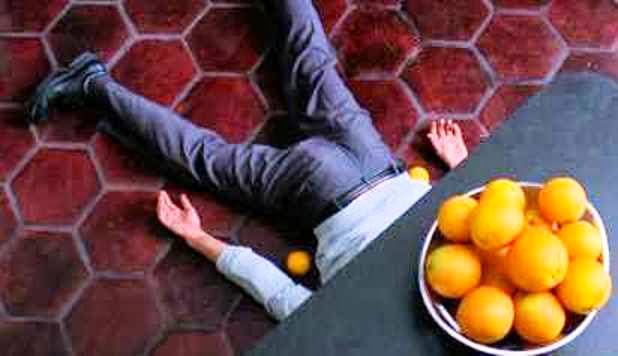 — Saul Goodman to Mike Ehrmantraut ("Buyout," written by Gennifer Hutchison, directed by Colin Bucksey)
By Edward Copeland
Playing to the back of the room: I love doing it as a writer and appreciate it even more as an audience member. While I understand how its origin in comedy clubs gives it a derogatory meaning, I say phooey in general. Another example of playing to the broadest, widest audience possible. Why not reward those knowledgeable ones who pay close attention? Why cater to the Michele Bachmanns of the world who believe that ignorance is bliss? What they don’t catch can’t hurt them. I know I’ve fought with many an editor about references that they didn’t get or feared would fly over most readers’ heads (and I’ve known other writers who suffered the same problems, including one told by an editor decades younger that she needed to explain further whom she meant when she mentioned Tracy and Hepburn in a review. Being a free-lancer with a real full-time job, she quit on the spot). Breaking Bad certainly didn’t invent the concept, but damn the show did it well — sneaking some past me the first time or two, those clever bastards, not only within dialogue, but visually as well. In that spirit, I don’t plan to explain all the little gems I'll discuss. Consider them chocolate treats for those in the know. Sam, release the falcon!

In a separate discussion on Facebook, I agreed with a friend at taking offense when referring to Breaking Bad as a crime show. In fact, I responded:

“I think Breaking Bad is the greatest dramatic series TV has yet produced, but I agree. Calling it a ‘crime show’ is an example of trying to pin every show or movie into a particular genre hole when, especially in the case of Breaking Bad, it has so many more layers than merely crime. In fact, I don't like the fact that I just referred to it as a drama series because, as disturbing, tragic and horrifying as Breaking Bad could be, it also could be hysterically funny. That humor also came in shapes and sizes across the spectrum of humor. Vince Gilligan's creation amazes me in a new way every time I think about it. I wonder how long I'll still find myself discovering new nuances or aspects to it. I imagine it's going to be like Airplane! — where I still found myself discovering gags I hadn't caught years and countless viewings after my initial one as an 11-year-old in 1980. Truth be told, I can't guarantee I have caught all that ZAZ placed in Airplane! yet even now. Can it be a mere coincidence that both Breaking Bad and Airplane! featured Jonathan Banks? Surely I can't be serious, but if I am, tread lightly.” 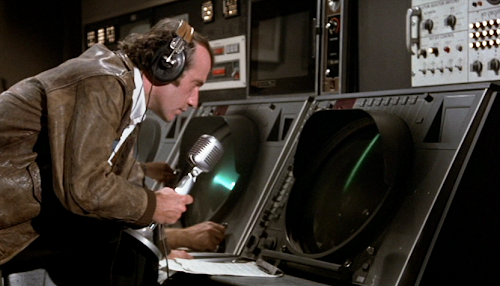 “He’s all over the place! Nine hundred feet up to 1,300 feet — what an asshole!”
— Jonathan Banks as air traffic controller Gunderson in Airplane! 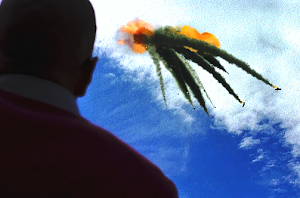 The second season episode “ABQ” (written by Vince Gilligan, directed by Adam Bernstein) introduced us to Banks as Mike and also featured John de Lancie as air traffic controller Donald Margulies, father of the doomed Jane. Listen to the DVD commentary about a previous time that Banks and De Lancie worked together. Speaking of air traffic controllers, if you don’t already know, look up how a real man named Walter White figured in an airline disaster. Remember Wayfarer 515! Saul never did, wearing that ribbon nearly constantly. Most realize the surreal pre-credit scenes that season foretold that ending cataclysm and where six of its second season episode titles, when placed together in the correct order, spell out the news of the disaster. Breaking Bad’s knack for its equivalent of DVD Easter eggs extended to episode titles, which most viewers never knew unless they looked them up. Speaking of Saul Goodman, he provided the voice for a multitude of Breaking Bad’s pop culture references from the moment the show introduced his character in season two’s “Better Call Saul” (written by Peter Gould, directed by Terry McDonough). Once he figures out (and it doesn’t take long) that Walt isn’t really Jesse’s uncle and pays him a visit in his high school classroom, the attorney and his client discuss a more specific role 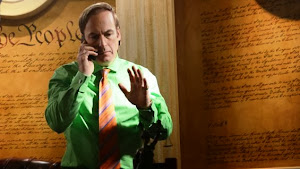 for the lawyer, with Saul referencing a particularly classic film without mentioning the title. “What are you offering me?” Walt asked, unclear as to Goodman’s suggestion for an expanded role. “What did Tom Hagen do for Vito Corleone?” the criminal attorney responds. “I'm no Vito Corleone,” an offended and shocked White replies. “No shit! Right now you're Fredo!” Saul informs Walt. Now, Walt easily knew what movie Saul summoned as an analogy there and I hope any reader easily can as well. It happens to be the same one referenced visually at the top of this piece when poor Ted Beneke took his fateful trip in season four’s classic “Crawl Space” (written by George Mastras & Sam Catlin, directed by Scott Winant). Gilligan from the beginning repeatedly told of how his original pitch for Breaking Bad was the idea of turning Mr. Chips into Scarface and he referred to Brian De Palma’s version of Scarface often, actually showing Walt and Walt Jr. watching the film together in the final season with the elder White commenting, “Everyone dies in this, don’t they?” — possible foreshadowing for how Breaking Bad would end, though it didn't play out that way. The show achieved homage more openly in casting key 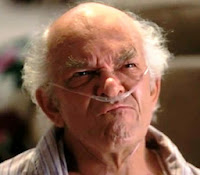 players from the 1983 film itself: Mark Margolis as Tio Hector Escalante and Steven Bauer as Mexican cartel chief Don Eladio. Of course, the entire series implies the reiterated refrain of De Palma’s film “Don’t get high on your own supply” because, while Walter White never used his blue meth literally, it certainly juiced him up and, as he told Skyler in the last episode “Felina” (written and directed by Gilligan), it made him feel alive. Unfortunately, I doubt any surviving cast members of 1939’s Goodbye, Mr. Chips remain with us so Breaking Bad might have cast them in appropriate roles, but many of the 1969 musical version still abound and what a kick it have been to see Peter O’Toole or Petula Clark appear as a character. Apparently, in 2002, a nonmusical British TV remake came about, but they needn’t have dipped that far in the referential well. Blasted remakes. As far as Scarface goes, I still prefer Howard Hawks’ original over De Palma’s anyway.

As I admitted, some of the nice touches escaped my notice until pointed out to me later. Two of the most obvious examples occurred in the final eight episodes. One wasn’t so much a reference as a callback to the very first episode that you’d need a sharp eye to spot. It occurs in the episode “Ozymandias” (written by Moira Walley-Beckett, directed by Rian Johnson) and I’d probably never noticed if not for a synched-up commentary track that Johnson did for the episode on The Ones Who Knock weekly podcast on Breaking Bad. He pointed out that as Walt rolls his barrel of $11 million through the desert (itself drawing echoes to Erich von Stroheim’s silent classic Greed and its lead character McTeague — that one I had caught) he passes the pair of pants he lost in the very first episode when they flew through the air as he frantically drove the RV with the presumed dead Krazy-8 and Emilio unconscious in the back. Check the still below, enlarged enough so you don’t miss the long lost trousers. 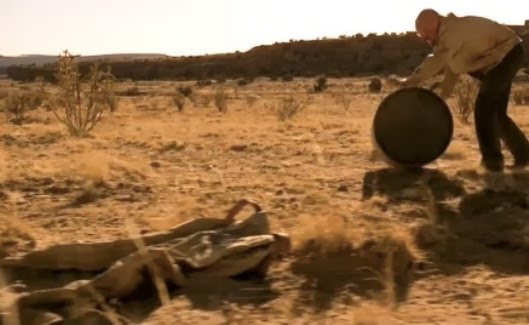 The other came when psycho Todd decided to give his meth cook prisoner Jesse ice cream as a reward. I wasn’t listening closely enough when he named one of the flavor choices as Ben & Jerry’s Americone Dream, and even if I’d heard the flavor’s name, I would have missed the joke until Stephen Colbert, whose name serves as a possessive prefix for the treat’s flavor, did an entire routine on The Colbert Report about the use of the ice cream named for him giving Jesse the strength to make an escape attempt. One hidden treasure I did not know concerned the appearance of the great Robert Forster as the fabled vacuum salesman who helped give people new identities for a price. Until I read it in a column on the episode “Granite State” (written and directed by Gould), I had no idea that in real life Forster once actually worked as a vacuum salesman.

Seeing so many episodes multiple times, the callbacks to previous moments in the series always impressed me. I didn’t recall until AMC held its marathon prior to the finale and I caught the scene where Skyler caught Ted about him cooking his company’s books in season two’s “Mandala” (written by Mastras, directed by Adam Bernstein), 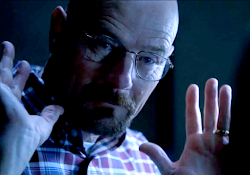 Beneke actually raises his hands and says, “You got me” — words and movements that return in season four’s “Bullet Points” (written by Walley-Beckett, directed by Colin Bucksey) when Hank tells Walt about the late Gale Boetticher and speculates jokingly about whether the W.W. in Gale’s notebook stands for Walter White. In the same episode, Hank discusses his disappointment (since he assumes Gale was Heisenberg) that he never got his Popeye Doyle moment from The French Connection and waved goodbye to Alain Charnier. Walt reminds Hank that Charnier escaped at the end of the movie, but in “Ozymandias,” Hank imitates Gene Hackman's wave anyway when he gets the cuffs on Walt and places him in the SUV. Film references and homages abound throughout the series. I don’t recall any to Oliver Stone off the top of my head (except, of course, that he wrote De Palma's Scarface) and I hope there weren’t given that filmmaker’s recent hypocritical and nonsensical whining about Breaking Bad’s ending where he called it “ridiculous” among other sleights. If that’s not a fool declaring a nugget of gold to be pyrite. (“IT’S A MINERAL, OLIVER!”) I'd also like to commend the nearly subliminal shout-outs to two great HBO series that received premature endings in the episode "Rabid Dog" (written and directed by Catlin). You can see the Deadwood DVD box set on Hank's bookshelf and, though the carpet cleaning company's name might be Xtreme, the way they design their logo on their van sure makes the words Treme stand out to me.

I wanted this tribute to be so much grander and better organized, but my physical condition thwarted my ambitions. I doubt seriously my hands shall allow me to complete a fourth installment. (If you did miss Part I or Part II, follow those links.) While I hate ending on a patter list akin to a certain Billy Joel song, (I let you off easy. I almost referenced Jonathan Larson — and I considered narrowing the circle tighter by namedropping Gerome Ragni
& James Rado.) I feel I must to sing my hosannas to the actors, writers, directors and other artists who collaborated to realize the greatest hour-long series in 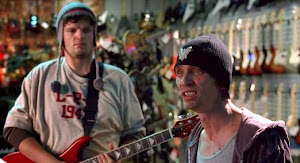 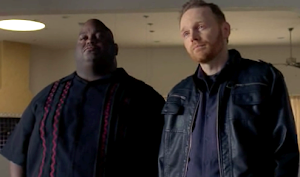 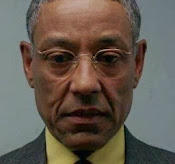 In fact, the series failed me only twice. No. 1: How can you dump the idea that Gus Fring had a particularly mysterious identity in the episode “Hermanos” and never get back to it? No. 2: That great-looking barrel-shaped box set of the entire series only will be made on Blu-ray. As someone of limited means, it would need to be a Christmas gift anyway and for the same reason, I never made the move to Blu-ray and remain with DVD. Medical bills will do that to you and, even if tempting or plausible, it’s difficult to start a meth business to fund it while bedridden. Despite those two disappointments, it doesn’t change Breaking Bad’s place in my heart as the best TV achievement so far. How do I know this? Because I say so. 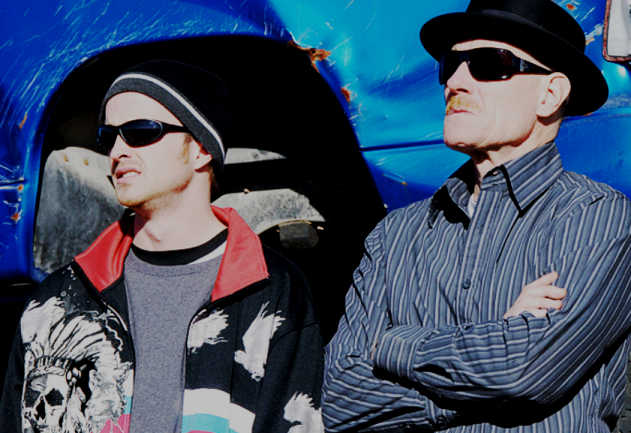