BLOGGER'S NOTE: This contains spoilers for the entire series, so if you belong to that group
that STILL has yet to watch Breaking Bad in its entirety, close this story now. 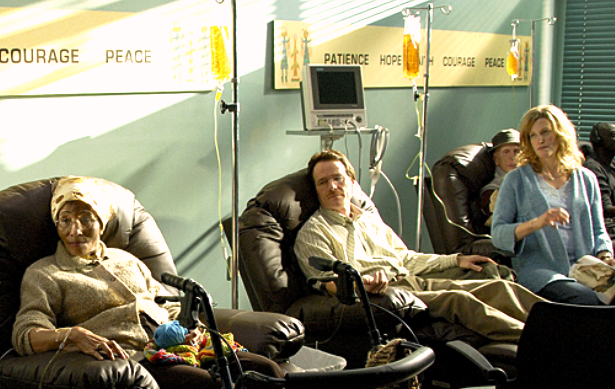 By Edward Copeland
When envisioning the epic farewell I felt I must write upon the conclusion of Breaking Bad, I didn't anticipate an important section of the tribute would begin with a South Park reference to The Simpsons. (If, by chance, you missed Part I, click here.)

Now, anyone with even a smidgeon of understanding of the basic tenets of comedy knows that if you need to explain a joke, you've failed somewhere in the telling. Despite this rule of humor, forgive me for explaining the title of the second part of my Breaking Bad tribute, but I can't assume that all Breaking Bad fans reading this also hold knowledge of specific South Park episodes. Way back in that animated series' sixth season in 2002, poor Butters' alter ego, Professor Chaos (six years before any of us knew Walter White and his inhabiting spirit Heisenberg), finds every scheme he devises greeted by some variation of the episode's title: "The Simpsons Already Did It." I just spent a long way to travel to the point of my headline, which refers to the great columnist David Sirota's article, posted by Salon on Sept. 28, the day before "Felina" aired, titled "Walter White's sickness mirrors America." (If you didn't understand before, I imagine you comprehend now how explaining a joke tends to kill its punchline.) In his piece, Sirota posits:


"Maybe Breaking Bad has ascended to the cult firmament because it so perfectly captures
the specific pressures and ideologies that make America exceptional at the very moment
the country is itself breaking bad.
The most obvious way to see that is to look at how Walter White’s move into the drug trade
was first prompted, in part, by his family’s fear that he would die prematurely for lack
of adequate health care. It is the kind of fear most people in the industrialized world
have no personal connection to — but that many American television watchers no doubt do.
That’s because unlike other countries, Walter White’s country is exceptional for being a place
where 45,000 deaths a year are related to a lack of comprehensive health insurance coverage.
That’s about ten 9/11′s worth of death each year because of our exceptional position
as the only industrialized nation without a universal public health care system
(and, sadly, Obamacare will not fix that)."
Aside from the fact the Sirota misses the mark a bit concerning Walt’s original motives for entering the meth-making business and makes it sound as if his family encouraged the idea and raised money concerns before he even started to cook (more specifics on that later), Sirota’s piece covers ground that I always planned to discuss as well. Sirota might not be the first person to voice this hypothesis, but I’ve only seen and read his article (post finale, as I purposely tried to avoid other pieces to make mine my own as much as possible). I also saw the funny package envisioning how Walter's tale would play out if set in Canada. Health care costs in the U.S., significant in Breaking Bad, secured itself as a crucial aspect of my retrospective since the first half of season five given that I’ve 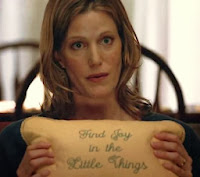 existed as a permanent patient for nearly the exact same time period as Breaking Bad’s television run. Unfortunately, my experiences give me much in the way of first-hand knowledge on the subject through which to view the series' take. While Sirota argues that Walt began his criminal career to pay for his exceedingly costly cancer treatments and White indeed used his ill-gotten gains toward those bills, he never expressed a desire to make a load of money to keep himself alive. Walter White already resigned himself to the idea of his impending death. The meth money’s only purpose originally, according to Walt, merely meant leaving behind a nest egg for Skyler, Walt Jr. and his as-of-then unborn child. He said as much in the great scene from the first season episode “Gray Matter” (written by Patty Lin, directed by Tricia Brock) where the entire family gathers at Skyler’s behest to stage a pseudo-intervention of the health care variety, passing around the “talking pillow” to take the floor and address Walt as to why he should accept the Schwartzes’ offer to pay for his treatments. The scene turns particularly grand 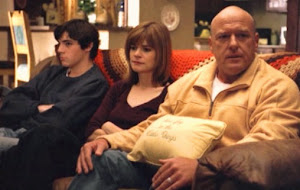 when Marie surprises (and pisses off) her sister by agreeing with Walt about not wanting to suffer through the chemo treatments and succeeds at changing Hank’s mind as well. A wonderful example of how the show (as all the best dramas do) successfully mixed levity with tragedy. One of the funniest moments in the history of The Sopranos came in its fourth season episode “The Strong, Silent Type” (story by David Chase, written by Terence Winter, Robin Green & Mitchell Burgess, directed by Alan Taylor) when Tony’s crew attempts a drug intervention on Christopher with disastrous and hilarious results. The night that episode aired, the premiere of “The Grand Opening” episode of Curb Your Enthusiasm (directed by Robert B. Wiede) followed it, with Larry David’s own singular attempt at an emergency intervention for his new restaurant’s chef (Paul Sand) who had Tourette syndrome. My stomach hurt from laughing so hard that night. What makes interventions so easily comical? When Walt agrees to treatments and uses his meth money to pay (while lying to Skyler that he accepted Elliot and Gretchen’s offer to help), what motivates him isn’t (at least consciously) a sudden desire to fight the cancer but the need to live longer and build up a bigger bequest for his family. While the insanity of medical costs floats around the series at this time, this isn’t where Breaking Bad truly takes aim on our broken system. 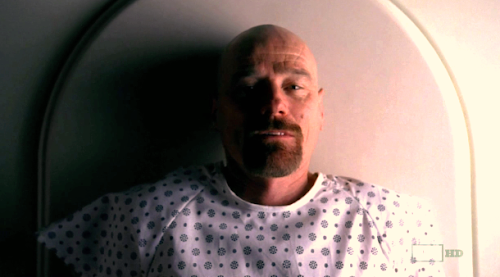 As I wrote in my sole previous piece on Breaking Bad prior to this post-series wake/celebration, I came to the series late and only began watching it live in the third season that premiered March 21, 2010, and ended with Gale Boetticher opening his apartment door to an emotionally fragile and gun-wielding Jesse Pinkman on June 13. As 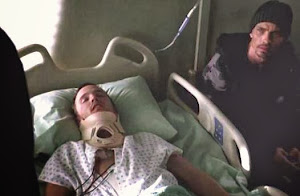 proved to be the case with each season of Breaking Bad, each new season topped the one that preceded it, even though no bad seasons or mediocre episodes exist. Breaking Bad tackled the high price of medicine, if not as an overriding concern, or motivation, in the first two seasons not only through the obvious costs of Walt’s cancer treatments, but also when Heisenberg first appeared and marched into the headquarters of the psychotic Tuco, demanding not only advance payment for his “product” but reparations as well to cover Jesse’s hospital bills from Tuco beating poor Pinkman within an inch of his life. For myself (and, admittedly, this came from overidentifying with someone losing the use of his legs, albeit not because of an assassination attempt by vengeance-seeking lookalike cousins), the series’ most direct discussion of the flaws in this country’s health care system came in the hospital scenes dealing with the aftermath of Hank’s shooting. In the early days, when Walt coughed up cashier’s checks for cancer bills 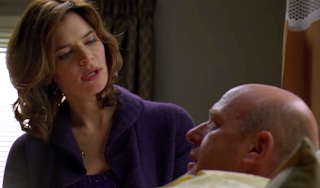 since his health insurance coverage through his school district didn’t approach the needed benefits to pay for his treatments, viewers saw some of the costs, but we never received a final bill, especially after Walt went the surgical option, handled by Dr. Victor Bravenec, played by Sam McMurray. McMurray also played Uncle Junior’s arrogant oncologist, Dr. John Kennedy, in the classic Sopranos episode “Second Opinion” (written by Lawrence Konner, directed by Tim Van Patten), where Tony and Furio used some not-so-friendly persuasion on the golf course to convince Kennedy to treat Junior right. (When McMurray showed up on Breaking Bad as an oncologist, part of me wondered if his character wasn’t Kennedy, having relocated under a new name to Albuquerque out of fear of mob repercussions, unaware that his new patient might be deadlier than anyone in that northern New Jersey crew could be.) Back to Hank. We know the extra needed to get Schrader on his feet again. That even came up again in the final eight episodes: $177,000. Pretty pathetic that a loyal public servant such as Hank Schrader, whose job constantly required him to put his life on the line, didn’t get the kind of catastrophic coverage he required when he needed it. For all the times, she could annoy him and cause him grief with that little kleptomania problem, Hank Schrader could not have chosen a better mate than the former Marie Lambert. Marie might only work as an X-ray technician, but she spoke the truth as she yelled at the various people in the hospital that Hank had to begin work on regaining the use of his legs immediately because a delay of even two weeks would be too late. I actually cried when I watched the episode where Betsy Brandt spoke those lines as Marie because I’d yelled those words myself at people in the hospital when I went in there in May 2008. (For those unfamiliar with my personal plight, click here.) I already had limited use of my legs because of my primary progressive multiple sclerosis. Two weeks stuck in bed can do irreparable damage to a marathon runner. Quite some time ago, I was able to make contact with Ms. Brandt and shared my tale with her about how I wish that I’d had someone like Marie back then to fight on my side. She graciously wrote back, “Edward, Marie would have definitely been your champion…and we all need a champion at times.” 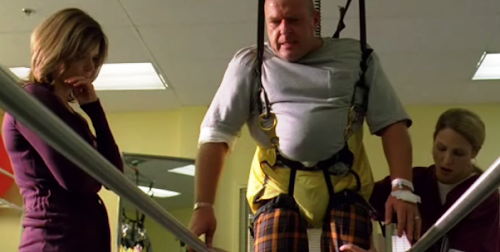 So much more to say. Who knows when I will get them posted? As I posted on Facebook, odds are this is psychosomatic or coincidental, but my M.S. symptoms have spread to parts of my body they had avoided before since Breaking Bad ended. Perhaps sheer force of will held them at bay until I saw the series until its conclusion. I haven't written all I planned to yet, but this makes for a good stopping point for Part II.