How do you solve a problem like J. Edgar? 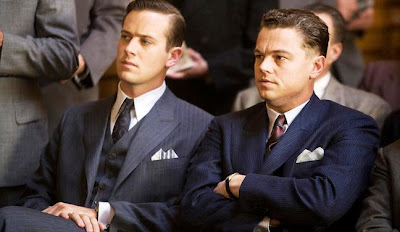 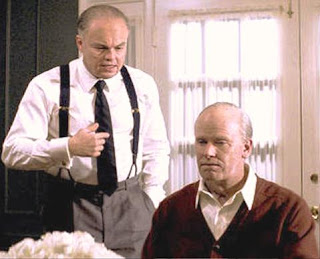 By Edward Copeland
After watching J. Edgar, I prepared to write my usual review, assessing the film overall for its direction, writing, performances and other technical qualities, but something kept sticking in my mind, preventing me from focusing on those aspects. My brain kept drifting back to a different question, one that has puzzled me in many movies for a long time but that reared its ugly head — literally — once again as I watched J. Edgar. Why in the 21st century, with all of the advancements that have been made in visual effects, does old age makeup still turn up so often looking so laughably bad as it does? It does such a disservice to the performers trying to act beneath the horrible messes slapped upon their visages. How can you concentrate on the performances of Leonardo DiCaprio, Armie Hammer and Naomi Watts in their characters' later years when their faces have been marred by such silly appliances? It doesn't always hurt — Jennifer Connelly won an Oscar for A Beautiful Mind despite the awful makeup that covered her at the end of that movie (or, more recently, Kate Winslet's awful aging in The Reader). What's more mystifying is when you look back at a film such as Arthur Penn's Little Big Man in 1970 and how great the old-age makeup on Dustin Hoffman was in that film. Enough on that subject. With that off my chest, I believe I'm ready to discuss the rest of J. Edgar now, truly a mixed bag of a movie if ever there were one.

John Edgar Hoover served as the first director of the Federal Bureau of Investigation, an agency whose creation he spearheaded in 1935 after leading its predecessor, the Bureau of Investigation, since 1924. Between the two bureaus, Hoover held the top job for nearly 50 years and in eight presidential administrations from Coolidge to Nixon. Hoover truly defined what it meant to be a man of contradictions. He led the way in modernizing many crucial techniques in criminal investigations such as fingerprinting and forensics but also frequently stepped outside the law to amass information on perceived enemies, either to himself or the country. His private life contained its own secrets, namely his close, perhaps gay, relationship with top assistant Clyde Tolson. At least as the movie portrays it, Hoover's paranoia about being gay stemmed from his mother, who once told him, "I would rather have a dead son than a daffodil for a son."

To compress a life full full of such huge historical events alongside the inner life of a man would be a challenge for any screenwriter and any director. While Dustin Lance Black (Oscar-winning writer of Milk) and two-time Oscar-winning director Clint Eastwood give it the old college try in J. Edgar, the sheer weight of all those years and all that material crushes them, leaving the film somewhat rudderless despite good performances.

Black's screenplay structures Hoover's life around the premise of a 1960s era Hoover (well-played by Leonardo DiCaprio, even beneath the hideous makeup) dictating his version of the events of his life to the first of several young agents, embellishing as he did in real life how much credit he deserved for various FBI triumphs. He practically claims to have shot and killed John Dillinger outside the movie theater himself, though he omits how in a pique he punished the agent who actually ended the '30s era bank robber's crime spree. Hoover, so closed-up and concerned about how he was perceived, would be a difficult role for any actor to pull off, so I don't think everyone realizes what a great job DiCaprio accomplishes here outside of those few rare moments of faint tenderness he allows himself to share with Clyde Tolson (equally well-played by Armie Hammer, so good as the Winklevoss twins in David Fincher's brilliant The Social Network.)

Because so much happened in U.S. history between 1924 and 1972, it would be damn near impossible to hit on everything that Hoover touched so the film concentrates on Communist radicals in the U.S. following the Russian Revolution, the kidnapping of the Lindbergh baby and the war on the criminals such as Dillinger in the 1930s. It also hits upon Hoover's efforts to form the FBI in the first place.

The uncertainty of his relationship with Tolson gives the film some heart. There's one scene where after a dinner together when the two men ride off together, Hoover nervously places his hand on Tolson's that's reminiscent of scenes in Jean-Jacques Annaud's The Lover and Martin Scorsese's The Age of Innocence.

Some of the more unsavory sides of Hoover's nature get short shrift such as his plans to sabotage Martin Luther King with stories of infidelity and Communist associates thinking it will get King to refuse his Nobel Peace Prize. He gets one scene with Robert Kennedy (Jeffrey Donovan) where he shows him evidence of sexual excess he has on his brother but nothing more comes of it until he hears of JFK's assassination, call his brother and tells him the president has been shot and hangs up.

Judi Dench and Naomi Watts turn in solid performances as the two important women in Hoover's life. Dench plays his mother whom Hoover lived with until her death and you see where most of his psychological blocks formed. Watts gives a subtle turn as Helen Gandy, Hoover's lifelong secretary who has as little interest in men or a family life as Hoover does in women. The film also shows her shredding Hoover's secret files upon his death while Nixon's men search frantically for them.

Aside for the dreadful makeup, J. Edgar looks exquisite in terms of cinematography, costumes and production design. Eastwood does his best trying to keep the film moving as it bounces between the various time periods, but the flaws with J. Edgar run deeper. The film lacks a compass, moral or otherwise, and desperately needs a point of view about Hoover. Imagine if this were an Oliver Stone film. Granted, his one brief touch on Hoover in Nixon had Bob Hoskins portraying him French-kissing Wilson Cruz as a pool boy, but that film itself was a surprisingly well-rounded look at Nixon himself.

J. Edgar, while DiCaprio turns in a very good performance in spite of the constraints, doesn't present a well-rounded Hoover. Everything the film has to say about the man seems drawn from quick pencil sketches on a napkin. DiCaprio manages to bring a depth to Hoover that the screenplay itself doesn't supply. In fact, based on the script's portrait, J. Edgar Hoover comes off as a smart but paranoid Forrest Gump who happened to be present at many of the key moments of the U.S. in the 20th century. Someone as consequential and important as he was, for both good and ill, needed a treatment that went beyond a Cliffs Notes version.

Comments:
For some of the worst in old-people makeup, check out some of the scenes in For the Boys. James Caan looks less human than his costar Mandy Patinkin in Alien Nation!