From the Vault: A Beautiful Mind 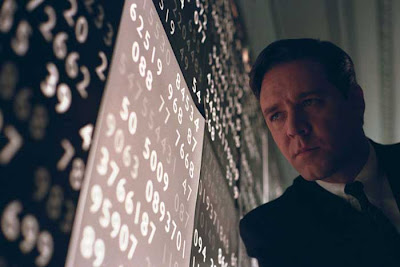 Despite his brilliance, Nobel Prize-winning mathematician John Forbes Nash's schizophrenia often prevented him from connecting reality's dots. A Beautiful Mind, Ron Howard's film of Nash's story, suffers from a similar disconnect, bouncing from scene to scene in a choppy and ultimately unsatisfying fashion.

If you don't know Nash's story or don't want to know before seeing the movie, it's best to stop reading now to better enjoy some of the film's best touches.

Nash (Russell Crowe) was an Ivy League whiz kid in the post-World War II era whose possible code-breaking skills caught the attention of a shady government operative (Ed Harris). There was one big problem: The operative didn't exist. He was a byproduct of Nash's condition, a figment of his imagination.

The revelation that Harris' character isn't real is one of the best moments of the movie, but once it's revealed, the screenplay settles into a monotonous routine. After that point, the film, which covers several decades in Nash's life, becomes like a table tennis match: He's sick; he's well; he's sick again.

All of that might be OK, if the movie tackled either mental illness or life in academia with insight or flair, but it's all synopsis. Aside from a great early scene in which Nash discovers a mathematical theory while trying to pick up women in a bar, A Beautiful Mind feels like it's a pebble skipping across the waters of an interesting story.

What A Beautiful Mind does have going for it are its performances, especially from Crowe. He didn't deserve his Oscar for the underwhelming Gladiator, but he deserves praise here.

There are also nice turns by Harris, Paul Bettany and Jennifer Connelly, though Connelly gets hampered in the later scenes by some of the worst old-age makeup ever put on film. A Beautiful Mind isn't a complete misfire, it's just a movie about a troubled mathematician that fails to add up.

Comments:
You've done an excellent job highlighting the weaknesses in a film that could have worked as an interesting meditation on the workings of an ill mind, but instead connects with very little, and as you say "feels like it's a pebble skipping across the waters of an interesting story. "

Agreed on the performances though, Crowe is very good, and the supporting cast is in fine form as well. Too bad they were surrounded by such a disengaged and uninteresting film.