The Human Beings Will Soon Walk a Road That Leads Nowhere

By J.D.
Many film critics consider the last "golden age" of American cinema to be the 1970s. They cite a steady decline in the quality of studio films during the 1980s and 1990s, and the emergence of the American independent film scene as the most important indicators of this deterioration. And to a certain degree this may be true. The '70s saw a wonderful trend of studios taking chances on risky films that often featured controversial subject matter or a departure from standard Hollywood stereotypes (i.e., opting for a downbeat ending as opposed to a happy one). A great example of a film from that decade that embodies a willingness to push the envelope of convention is Arthur Penn's Little Big Man, which turns 40 years old today, an endlessly fascinating and entertaining film that contrasts the harshness and violent nature of the frontier where a man defines himself through violence, by inserting a protagonist who instead defines himself through predominantly nonviolent actions. Herein lies the brilliance of Little Big Man, a film that takes an existing genre such as the Western and consistently subverts our expectations at every turn.

The film begins with an intriguing opening: it is present time and a snobby scholarly type is trying to interview a very elderly man (Dustin Hoffman) who claims to be the only white man to have survived the infamous Battle of Little Big Horn, also known as Custer's Last Stand. The film then proceeds to recount Jack Crabb's colorful past in a series of flashbacks. Right from the first one we are acutely aware that this is not going to be the usual Western. Penn's camera does a slow pan over a beautiful, scenic grassy field. This idyllic scene is quickly shattered as the camera continues its pan and we are struck by a rather primitive, horrific sight: a dead man spread eagle, covered in blood. This is soon followed by more bodies and burnt out carriages, the remains of a settler encampment massacred by Native Americans. This rather unromantic portrayal of the Old West is only the beginning of a scathingly critical look at the conventions and the mythology of the Western. 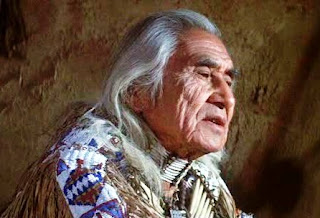 Jack Crabb and his sister Caroline are the only survivors of this skirmish and are soon found by a Cheyenne Indian who takes the two back to his people. After Jack's sister escapes, he is soon adopted by the Cheyenne who don't turn out to be brutal savages but actually quite the opposite. They are a thoughtful, noble people that are finding their way of life being rapidly wiped out by the white man. In an interesting turn, the Cheyenne refer to themselves as "human beings" and their humanity becomes readily apparent in their quick acceptance of Jack and the willingness to teach him their ways and customs. Ironically, they don't view white men as "human beings" and this becomes evident in the white man’s harsh treatment of not only Native Americans but themselves as well.

The film follows Jack through the various stages of his life where he not only learns valuable lessons about life and the world but also meets an intriguing assortment of characters that appear and reappear at crucial moments in his life. The first three phases of Jack's life reveal the tried and true stereotypes inherent in the Western. These archetypes are parodied in order to expose how hollow and outdated they are.

Jack's first phase, a religious one, sees him under the dubious tutelage of Mrs. Pendrake (Faye Dunaway), a God-loving woman who, as it turns out, is into more "sinful" pursuits than her virginal attire would suggest. This revelation exposes Jack to the double standards and hypocrisy of religion — that many people rarely practice what they preach as Mrs. Pendrake so adequately demonstrates. This rather amusing episode also marks the final eradication of naiveté that might have existed in Jack.

From there, he hooks up with Allardyce T. Merriweather (Martin Balsam), a sleazy salesman who "tended to lose parts of himself" in retribution for his shady dealings. A left hand here, a left ear there...more parts gradually disappear as the years pass, transforming Merriweather into a ridiculous figure who still tries to con anyone who will listen. This is Jack's con man phase as Merriweather shows him that the world has no moral order. Merriweather embodies the dark side of the capitalist dream at its most garish and lays it all out for Jack when he tells him, "Those stars twinkle in a void dear boy and the two-legged creature schemes and dreams beneath them all in vain...The two-legged creature will believe anything. And the more preposterous the better." Merriweather preys on people and they in turn prey on him — hence his rapidly diminishing body parts.

Jack's next period in life sees him reuniting with his sister who rescues him from a lynch mob and ends up teaching him to be an ace shot with a gun. So, he decides to become a professional gunslinger, complete with an all black outfit and spurs. But he ends up being a hilarious parody of a killer with his often clumsy gestures and the general way in which he carries himself. Jack is all talk and no action. He even ends up meeting the legendary gunslinger Wild Bill Hickok (Jeff Corey) who points out, "you don't have the look of murder in your eye." As if to prove his point, Wild Bill coolly guns down a man who tries to kill him. Jack realizes that Wild Bill is a real killer, while he is merely a poseur. It is a rather ironic moment as we realize that Jack has become an expert in quick draw and shooting with a gun, and yet he is unable to kill people with it.

Little Big Man was a film that had been a long time in the making. MGM originally wanted to make it as a multimillion dollar epic based on Thomas Berger's best-selling novel. The deal fell through and a smaller studio, Cinema Center Films, agreed to finance the film in June 1969. Jack Richardson had originally started writing the screenplay for MGM and was subsequently replaced by Calder Willingham who took over and produced a wonderfully rich script that covered an important period of American history and one man's interaction with many of the pivotal figures of this time.

The film was budgeted at $5 million with Dustin Hoffman in the lead role and Arthur Penn directing. Penn's involvement also led to the film's break with convention. He was in large part responsible for ushering in an era of ultra-violent and blood-soaked action films with his stylish feature, Bonnie and Clyde (1967), which divided critics and audiences alike but is still regarded as a landmark film for the way in which it took an

existing legend and reworked it for modern sensibility. This is exactly what he did with Little Big Man. As Penn commented in an interview, one of the aims of his film "was to say, 'Wait a minute, folks, the American Indian has been portrayed in movies in the most unpleasant way possible' — I mean, pure, naked racism — 'so let's examine how we have told our own history, such as Custer's last stand.' I mean, you go out there to this day and they feed you a lot of bullshit about the great, brave Custer, but the books don't bear that out at all. He was a pompous, self-aggrandizing man." To this end, Penn's film goes a long way to imparting a real sense of humanity to the Indians while showing the white man's greed and pomposity as embodied by the vain General Custer (Richard Mulligan). The film also includes numerous scenes of Indian villages being systematically wiped out by the United States army. No one is spared in these genocidal acts: not women, not children. These scenes and the fact that the film was made during the height of the Vietnam War give the material additional meaning. Little Big Man may not only be commenting on the brutal treatment of Native Americans but also the involvement in other cultures throughout the world. One could argue that Penn's film is not only a critique of past American history but also of contemporary events as well.

Little Big Man received generally favorable reviews from critics back in the day. Roger Ebert gave it four out of four stars and wrote, “Most movie Indians have had to express themselves with an "um" at the end of every other word: ‘Swap-um wampum plenty soon,’ etc. The Indians in Little Big Man have dialogue reflecting the idiomatic richness of Indian tongues; when Old Lodge Skins simply refers to Cheyennes as ‘the Human Beings,’ the phrase is literal and meaningful and we don't laugh.” In his review for The New York Times, Vincent Canby wrote, “All of these things are true, and yet Little Big Man — both in spite of and because of these failings — is an important movie by one of our most interesting directors.” Finally, Time magazine wrote, “it also accomplishes that rarest achievement, the breathing of life into an ossified art form. The '70s has its first great epic. Blood brother to the 1903 one-reeler, The Great Train Robbery, Little Big Man is the new Western to begin all Westerns.”

Little Big Man is a film that could only be made in the '70s. No major studio nowadays would be willing to back such a critical film without a big name star to attract a mass audience. At best, the film would probably have to be done on a low budget with independent backing and a cast of unknowns. One only has to look at a "revisionist Western" such as Dances With Wolves (1990) to see how radical a film such as Little Big Man still is. Kevin Costner's film has the same goals and intentions as Penn's film, however, where Dances With Wolves was satisfied to water down its message into a palatable, politically correct pill for all to swallow, Little Big Man refuses to compromise or sentimentalize its message or its subject. Penn's film avoids the trap of reducing Native Americans to quaint stereotypes or romanticizing its story and its surroundings. It is this unyielding attitude that makes Little Big Man a daring, original film whose power and impact has yet to be dated by time.

Comments:
Dunaway is so great in this, she really deserved a supporting actress nomination and Hoffman deserved a lead one. How it got left out of a slew of nominations is beyond me? My personal affection for Mulligan probably would have landed him in too, though at least they noticed Chief Dan George. To think of the nominations wasted on Love Story that could have gone to this. I guess Oscar means never having to say you're sorry even though it shouldn't.

Perhaps, the film was too radical for stuffy Academy voters at the time. The film took a pretty extreme stance so it's not surprisingly it was ignored.