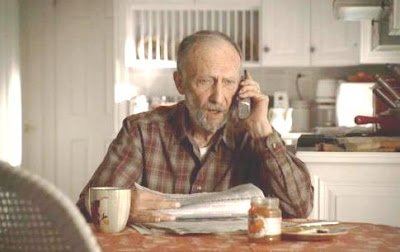 When I was just beginning my years of obsessive New York theatergoing, the second Broadway show I took in was the last new Stephen Sondheim musical to premiere on Broadway, Passion, in 1994. I was still an amateur as far as theatergoing went so I got to the Longacre Theatre for the 2 p.m. Saturday matinee very early. Seated on the sidewalk by the stage door in a T-shirt and jeans wearing a baseball cap creased to the point it resembled a duck bill, was the actor Tom Aldredge. Throughout my theatergoing years, which basically ran from 1994 until 1999 with a handful later before ending permanently in 2002, I saw Aldredge, not by design, in more shows than any other actor. Readers who haven't attended New York theater regularly since Aldredge made his Broadway debut in 1959 probably know him best from his television work, be it as Carmela's father Hugh DeAngelis on The Sopranos, Patty Hewes' Uncle Pete on Damages or Nucky Thompson's bitter father Ethan on Boardwalk Empire. Aldredge died Friday after a long battle with cancer. He was 83.

As I said, I saw him more on stage than any other actor (not that it took much) seeing him in four shows between 1994-97. In addition to Passion, I saw Aldredge as Rev. Jeremiah Brown in the revival of Inherit the Wind with George C. Scott and Charles Durning. I got to see him perform Solyony (the Captain) in Chekhov's The Three Sisters, replacing Jerry Stiller in the role. Finally, I saw him play Stephen Hopkins in the revival of the musical 1776 with Brent Spiner and the late Pat Hingle.

Aldredge was born Feb. 28, 1928, in Dayton, Ohio. He attended the Goodman School of Drama at DePaul University. He married his wife Theoni V. Aldredge in 1953, a union that lasted until her death in January of this year. Theoni was an acclaimed costume designer for theater and movies who won three Tonys for her work (Annie, Barnum and La Cage Aux Folles ) out of a total 14 nominations and won an Oscar for her costumes for 1974's The Great Gatsby. 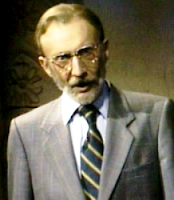 The first time I recall seeing Tom Aldredge actually combined theater and television. It was when PBS aired a filmed version of Sondheim's great Broadway musical Into the Woods in 1991. Aldredge played the dual role of the narrator and the Mysterious Man. Given Aldredge's prolific output in television and movies, I'm certain I ran across him before that, but it certainly was the first time he left an impression on me. The second time came courtesy of HBO, but not on the more celebrated series he's probably most recognizable from, but from what may be the first really good made-for-HBO movie: 1993's Barbarians at the Gate. Aldredge's part wasn't huge, but I remembered him in that great Larry Gelbart-scripted account of the takeover battle for RJR Nabisco starring James Garner and Jonathan Pryce. After that, most of my Aldredge performances were seen on stage.

Tom Aldredge's New York stage career began in 1957 and he landed his first Broadway show in 1959 in the musical comedy The Nervous Set which also featured Larry Hagman in its cast. It took seven years to land another Broadway role but when he did, what a cast he got to work alongside. The original comedy UTBU was directed by Nancy Walker and had an ensemble featuring Cathryn Damon (Mary Campbell on Soap), Margaret Hamilton, Tony Randall and Thelma Ritter. Alas, it only lasted 15 previews and seven performances. Fortunately, Aldredge was back on Broadway the next month in Slapstick Tragedy, which was an evening of two new Tennessee Williams' one-act plays. Aldredge appeared in the first, The Mutilated. The second one-act was The Gnadiges Fraulein.

In the seven year interim between his Broadway debut in 1959 and his return in 1966, Aldredge was by no means idle. He made his television debut in 1961 as part of The Premise Players on a Paul Anka special called The Seasons of Youth where Anka discusses a long-lost crush and the actors perform skits about young love. In 1963, Aldredge made his film debut in The Mouse on the Moon, the sequel to The Mouse That Roared. In 1964, many of the same members of The Premise Players, which now included Buck Henry who co-wrote the script, made The Troublemaker about a New Jersey chicken farmer who moves to Greenwich Village to open a coffee shop. Aldredge had a role in 1965's Who Killed Teddy Bear?, whose plot, as described by IMDb, is "A busboy at a disco has sexual problems related to events in his childhood. He becomes obsessed with a disc jockey at the club, leading to obscene phone calls, voyeurism, trips to the porn shop and adult movie palace, and more!" The unusual cast includes Sal Mineo, Juliet Prowse, Jan Murray, Elaine Stritch and Daniel J. Travanti. Aired on TV in 1966 after Aldredge had returned to New York was a movie adaptation of Tennessee Williams' Ten Blocks on the Camino Real which Williams wrote and which starred Martin Sheen.

Back in New York, before he returned to Broadway, Aldredge took part in two of Joseph Papp's Shakespeare in the Park productions in the summer of 1965. First, he played Boyet in Love's Labors Lost. Then he played Nestor in Troilus and Cressida, whose cast included James Earl Jones, Michael Moriarty and John Vernon. Throughout his career he would return to the Delacorte and Shakespeare. He played Tybalt in Romeo and Juliet in 1968, Sir Andrew Aguecheek in Twelfth Night in 1969, the title role in Cymbeline in 1971, the 2nd Gravedigger in Hamlet in 1972, Lear's Fool in King Lear in 1973 and John of Gaunt in Richard II in 1987. Ironically, the only time Aldredge received an Emmy nomination, it was a Daytime Emmy nomination (which he won) for playing Shakespeare in a 1973 episode of The CBS Festival of Lively Arts for Young People titled "Henry Winkler Meets William Shakespeare." Aldredge appeared in many off-Broadway productions but two to take note of are his role of Emory in the original production of the landmark play The Boys in the Band and the Joseph Papp production of David Rabe's Sticks and Bones, which transferred to Broadway and earned Aldredge the first of his five Tony nominations.

His 1972 nomination for lead actor in a play for Sticks and Bones, which won best play, was Aldredge's only in the lead category. His other nominations came for the revival of the musical Where's Charley? in 1975, the revival of The Little Foxes opposite Elizabeth Taylor in 1981, in the original musical Passion in 1994 and in the revival of the play Twentieth Century in 2004.

Throughout his Broadway career, he performed the works of O'Neill (The Iceman Cometh, Strange Interlude), George Bernard Shaw (Saint Joan) and Arthur Miller (The Crucible) and created the role of Norman Thayer Jr. in the original production of On Golden Pond. His final Broadway show was a revival of Twelve Angry Men that closed in May 2005.

His many film credits include Coppola's The Rain People, a 1973 film version of his stage success Sticks and Bones directed by Robert Downey Sr., Lawn Dogs, Rounders, Intolerable Cruelty, Cold Mountain, the remake of All the King's Men, What About Bob? and The Assassination of Jesse James by the Coward Robert Ford.

He appeared in lots of episodic television and some notable TV movies including the miniseries The Adams Chronicles, Great Performances' Heartbreak House, playing Justice Hugo Black in Separate But Equal and O Pioneers!

Aldredge was a talented and prolific actor who needs to be remembered for more than playing Carmela Soprano's dad, but for Sopranos trivia buffs I'll toss in that Hugh and Carmela's mother Mary (Suzanne Shepherd) didn't appear until Livia was banned from the Soprano home. Who can forget him ripping into Livia at her wake? I wish YouTube had the actual clip of "Ever After" that Aldredge starts the cast singing at the end of Act I of Into the Woods, for I feel it's a fitting close. Click here and listen anyway,

Comments:
Thank you for the beautiful article of our uncle. My husband Tom and I experienced first hand some of the plays. We will cherish our memories of him. Know that he loved each and every one of his broadway/film family in NY. He is truly at peace now.

Your family has my condolences. Every time I saw that he was going to be in something I was about to watch, be it on stage, screen or TV, my spirits lifted because I always looked forward to seeing him. I wished I'd said something to him that day I saw him waiting for the stage door to open, but my policy always has been to let performers or celebrities be so I didn't come off as some fawning fan. He will be missed, though I hear we'll see some more of him as Nucky's dad when Boardwalk Empire returns in September.