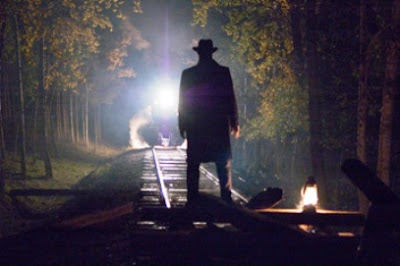 By Edward Copeland
I've never made it a secret that the films of Terrence Malick aren't my cup of tea. So when many reviews of Andrew Dominik's The Assassination of Jesse James By the Coward Robert Ford compared the film to Malick last fall, it dampened my enthusiasm for rushing out to see this 160 minute movie. That was a mistake, because now that I've caught up with it on DVD, I wish I could have seen it in a theater, not only because it is as beautiful as most Malick films, but because it's a near-great film with solid writing and acting that wears its length spectacularly well, something Malick films haven't done for me.

First and foremost, I have to cite the greatest asset of Jesse James: Roger Deakins' remarkable cinematography, for which he received an Oscar nomination alongside his separate nomination for No Country for Old Men.

This year's crop of cinematography nominees may be the strongest in the category I've seen in a long time. In addition to Deakins' nominations, there also is great work by Janusz Kaminski for The Diving Bell and the Butterfly, Seamus McGarvey for Atonement and Robert Elswit's magnificent work in the otherwise blah There Will Be Blood.

I think Elswit likely will win Sunday, but Deakins' work on Jesse James really deserves the prize, especially since Deakins now holds seven Oscar nominations without a win. I hope I'm wrong Sunday, because his work on The Assassination of Jesse James By the Coward Robert Ford stands heads and shoulders above the others in this brutally strong field.

However, unlike your typical Malick feature, there is more than meets the eye in Jesse James. Director Dominik adapted the script from the novel by Ron Hansen, and he uses a free-flowing narrative, punctuated frequently by an omniscient yet unidentified narrator, to tell the story of the man who killed the famous outlaw.

As the first title character, Brad Pitt gives one of his best performances, an alternately charming and chilling turn that is as tightly coiled as Joe Pesci as Tommy in Goodfellas.

Casey Affleck does well as the title's other name as well, though the Academy's decision to place him in supporting is questionable at best, though not nearly one of its worst lead/supporting categorization mistakes. Affleck nicely mixes the naive and calculating parts of the young Robert Ford, who, as Jesse points out, is either a lot like James or merely wants to be the legend.

The rest of the ensemble does equally well, including Paul Schneider, Jeremy Renner and Sam Rockwell as various members of the James gang and Sam Shepard as Jesse's older brother Frank.

What makes The Assassination of Jesse James by the Coward Robert Ford so compelling is its entire construction. For a film that runs 2 hours and 40 minutes, it never lags and its stylistic flourishes only enhance the tale, never distracting from the narrative itself.

Also, unlike most Westerns of the past few decades, the film's mission doesn't seem to include deconstructing the myths to say something larger about the genre. Instead, it just dazzles the eye, entrances the viewer and tells a fine, oft-told tale.

One final note about a great aspect of the film: In a time where more often than not, musical scores tend to stomp on the movies they serve, the music by Nick Cave and Warren Ellis is subtle, evocative and one of the finest movie scores I've heard in some time.

Comments:
I had thought about seeing this, but Pitt's attempts at acting have gotten to be so embarassing that I just can't face them any more, especially since that scene in TROY when he tried to keep up with Peter O'Toole and was left floundering.

Excellent film, and among my favourites of last year. I thought the narrator was a very nice touch, I didn't really understand the meaning, or even the reasoning of it at first... then I was talking with a friend who observed that it's supposed to mimic the "spectroscope" which is referenced in the film, especially towards the end. Adds that extra level to the approach to fame and mythology that the film tackles so well.

Edward.. I don't know if anyone can be blamed for not seeing this in theaters last year, as it had so little support from its distributor. Still, I'm glad people are catching up with it on DVD. I saw it twice in theaters last year, re-watched it again on DVD and have been blown away each time by its tone, mood and visual artistery. My fav film of '07, no doubt.

I was blown away by this film, after hearing almost nothing about it beforehand. One of the best examples of a film that earns its hefty running time. Pitt is enjoyable as an actor, but I sense that he's never been challenged before like he was in The Assassination and he really rises to the occasion. Wonderfully acted, beautifully shot, marvelously written. All kinds of tingling meta-commentary on celebrity and the media. Who could ask for more?

I too let something - a bad review somewhere, the Malickisms, the fact that 3:10 to Yuma was nothing special - keep me away from this during the first run. I was lucky enough to catch it at a second run theater though - boy, it's worth it. Beautiful and smart and funny - very impressive film. I also think it makes some of the most canny use of the star system you could ask for - Pitt as the Celebrity who can't go out of his house; Casey Affleck playing someone's little brother... it uses those things - it makes the references to the actors' personae serve the story. It's neatly done...

one of the top two films of 2007 for me, casey affleck was mesmirising