The waiting isn't the hardest part 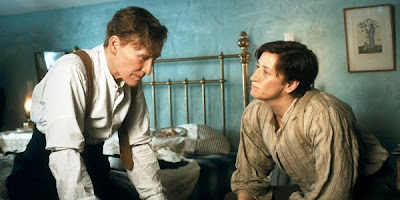 By Edward Copeland
Glenn Close's fascination with the story of Albert Nobbs began in 1982, the same year she made her film debut in The World According to Garp where she vividly brought John Irving's character of Jenny Fields to cinematic life and was robbed of an Oscar for her efforts by Jessica Lange's win for Tootsie, when Lange wasn't even the best supporting actress in Tootsie. Before I watched the film of Albert Nobbs, I hadn't heard many complimentary things about the movie but it surprised me. Much of Albert Nobbs, especially in the earlygoing, plays more as a comedy and a solid ensemble brings its canvas of characters to entertaining life, most notably Oscar nominee Janet McTeer. To be sure, Albert Nobbs contains flaws and, ironically, its biggest weakness lies in the performance of the actress whose perseverance got the film made in the first place.

For those unfamiliar with the story of Albert Nobbs, it began life as a short story by Irish novelist George Moore called "The Singular Life of Albert Nobbs" in 1918 about a woman who lives disguised as a man for 30 years in 19th century Ireland in order to find work. Nobbs finds employment as a waiter at an upscale Dublin hotel and hopes to save enough money to open his/her own shop. A chance meeting with a painter leads Albert to discover another woman who lives as a man and has taken a wife as well, giving Albert the idea that perhaps she should take a bride when she makes her escape as well, setting her sights on a young maid who is having a torrid affair with another worker with plans to escape to America.

Simone Benmussa adapted the short story into a play and directed Close in the starring role in the summer of 1982 in a production presented by the Manhattan Theatre Club at Stage I of New York's City Center. Close won an Obie Award for her performance. In the nearly 30 years that followed, Close made it her mission to play the part on film. Close met one of her co-producers, Bonnie Curtis, on the film The Chumscrubber where Close handed Curtis a draft of a screenplay for Albert Nobbs and told her, "I must play this part on the big screen before I die." Now that she finally has achieved that dream, she not only plays Nobbs, Close also co-produced and co-wrote the film as well as the lyrics for an original song sung by Sinead O'Connor over the film's credits.

Albert Nobbs almost came to the screen first under the guidance of Hungary's great director Istvan Szabo (Mephisto) who directed Close in the 1991 film Meeting Venus. She gave Szabo a copy of Moore's short story and soon he handed her the first treatment for an Albert Nobbs movie so he still receives screen credit (though not on the Inaccurate Movie Database) for the treatment along with Moore for his story and Close, John Banville and Gabriella Prekop for screenplay.

In the majority of her duties on Albert Nobbs, Close seems to have performed well. She earned an Oscar nomination for best actress, but a lot of mediocre performances have been nominated (and won) before. Close's take on Albert Nobbs comes off as so stilted and mannered when compared to the performances of everyone else in the cast that she acts as if she's in a different movie. It's only accentuated because the actors and actresses that surround her carry themselves with such ease and that goes for seasoned vets such as Pauline Collins as the hotel's owner, Brenda Fricker as on, Brendan Gleeson, Phyllida Law and newer discoveries such as Mia Wasikowska and Aaron Johnson (the young John Lennon in 2010's Nowhere Boy).

Now, it isn't merely because Close portrays a woman pretending to be a man in the 19th century and Albert Nobbs isn't a comedy, though it does contain a fair amount of humor in it, because Janet McTeer also plays a woman pretending to be a man and she's brilliant. I was fortunate enough to see McTeer live on Broadway as Nora in the 1997 revival of A Doll's House and she was spectacular (and deservedly won the Tony). She wowed again when she earned a lead actress Oscar nomination for her role in the 1999 film Tumbleweeds directed by Gavin O'Connor when he made interesting movies before he turned to junk such as Warrior.

In the lead paragraph, I brought up Tootsie (in a different context admittedly) but Dustin Hoffman's work as Dorothy Michaels in that film is so great because after awhile, you not only forget that it's Hoffman, you believe it's a woman. I wouldn't go that far with McTeer, but I find it more believable that her character of Hubert Page could pass for a man in 19th century Dublin than I could Close's Albert Nobbs. Hell, I'm not sure Nobbs would pass for a human.

You would think when the main character turns out to be a film's major deficit, the film itself would be doomed, but miraculously I enjoyed Albert Nobbs in spite of Albert Nobbs. Somehow, the rest of the cast, the script and the surefooted direction by Rodrigo Garcia (Mother and Child) more than compensate for Close's performance. (It's somewhat ironic because Close gave the only great performance in Bille August's awful 1993 all-star adaptation of Isabel Allende's The House of the Spirits that featured the rare bad Meryl Streep performance and a cast that also included Jeremy Irons, Winona Ryder and Vanessa Redgrave.)

I do sense that significant sections of the film were edited out based on the presence of actor Jonathan Rhys Meyers. He plays a viscount who checks into the hotel with his wife. We see one brief scene that shows a naked man waking up in his bed in the morning and then we don't see him again until he and his wife check out. Something must have been left on the cutting room floor. It didn't add anything, so they might as well have cut out all those scenes.

Much of the behind-the-scenes work succeeds at a high level including cinematography by Michael McDonough (Winter's Bone), production design by Patrizia von Brandenstein (Oscar winner for Amadeus) and costumes by Pierre-Yves Gayraud.

Albert Nobbs always will mystify me. I can think of major problems with the film, but I can't dispute the fact that I enjoyed it anyway. In a way, it's sort of a corollary to my idea that the purest test as to whether a movie works for you or not is if your mind wanders and you get bored. Albert Nobbs held my interest and I didn't have an unpleasant time watching it, even if a lot of Glenn Close's acting choices made me cringe. It's sad. I'm surprised that no one has mentioned that when Close loses come Oscar night, that will make her 0 for 6, tying her with Deborah Kerr and Thelma Ritter among actresses with the most nominations without winning (though Kerr's were all in lead and Ritter's were all in supporting while Close splits hers evenly three in each category).

Comments:
Generally, I like Glenn Close - she's never really been able to shake off her theater training, so even her good performances have always bordered on staginess; truth be told, I think this is a particular flaw of her work in Garp, although she's still pretty enjoyable in that. While it pains me to be unchivalrous, I can't sugarcoat the matter when it comes to Albert Nobbs; it's a bad performance. To say she doesn't resemble a human is putting it mildly; she looks like waxwork...Charlize Theron had more facial mobility in Monster). The folly is compounded by the odd, static, very stagy style of delivery she favors - it's the strangest performance she's ever given, and ultimately, one which required much more in the way of directorial supervision. I realize this is Close's project, and she was the one calling all the shots - Garcia was effectively working for her, and not necessarily in a position to contradict or question her choices - but when a director sees a performer going in the wrong direction, they have responsibility to the film to try and correct the problem. Given his track record with actors in the past, I find it difficult to believe he was totally insensible to how off-course Close was veering here, and made much of an attempt to take the bull by the horns.

McTeer called out sick the day I went to see A Doll's House - an entire decade passed until I forgave her for it. She blew my mind with her towering Tony-nominated performance in Mary Stuart a few years ago, so the books are now squared.

They call Cal Ripkin the Janet Mcteer of baseball. If she was sick, Josh R., she must have been bedridden. I'm sorry you missed it.

I also enjoyed her MARY STUART on Broadway, and my only regret is that I saw it but once.

Finally, if I were an actress, I'd rather be in the same company as Thelma Ritter and Deborah Kerr than any other two actresses ... unless one of them was Janet McTeer.