These memories lose their meaning 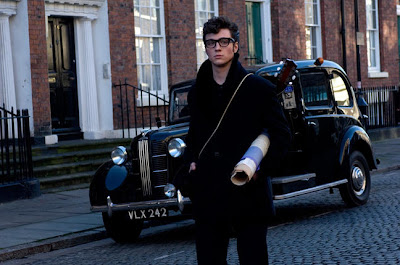 By Edward Copeland
A little more than 30 years since his murder, films chronicling John Lennon and the formation of The Beatles almost have become their own genre. With Nowhere Boy, we get to see Lennon as a teen and see another portion of his biography fleshed out (and fleshed out well, thanks to the lead work of Aaron Johnson as young Lennon).

Nowhere Boy depicts the years when Lennon was a student constantly in trouble at school and more interested in his fledgling music career than anything else. He lives with his Aunt Mimi (Kristin Scott Thomas), who more or less raised John even though his mother Julia (Anne-Marie Duff) lives nearby.

His disinterest in academics causes many conflicts with Aunt Mimi, but Mimi does love the boy, going so far as helping him to buy a guitar so that his group The Quarrymen can play more, even securing paying gigs. However, when Mimi learns he's been suspended from school and didn't tell her, she sells the instrument, much to John's consternation.

Depending how much of a John Lennon/Beatles fanatic you are, many of the details that Nowhere Boy shares might be things you already know, but the film by director Sam Taylor-Wood and screenwriter Matt Greenhalgh paints such a vivid portrait of working class Liverpool in the 1950s, that it hardly matters. It would be a good story even if its main character didn't grow up to be a legend.

Johnson doesn't try to do a Lennon imitation and that makes his performance all the stronger. Instead of trying to sound or look like Lennon, he just plays the part and succeeds at capturing Lennon's essence in a way the role might not work if the emphasis was on casting a young facsimile.

The same goes for Thomas Brodie Sangster who plays the young Paul McCartney. The actor is 20 years old, but he makes a more-than-convincing 15-year-old McCartney. His character really occupies a small part of Nowhere Boy, but Sangster makes the most of his limited screen time.

Duff also gets a lot of nice moments as Lennon's flighty and absentee mother Julia. She tries to keep things on a fun level, knowing the disappointments she's brought to her son's life, but she gets to let loose late in the movie in scenes that are emotionally wrenching and heartbreaking.

Above all, Nowhere Boy is blessed to have Kristin Scott Thomas. Her career trajectory has taken a remarkable path. When she first gained a lot of notice around the time of The English Patient, she didn't really do that much for me. However, in the past few years, often in foreign language films, she's become one of the reliable actresses around, whether she's the lead (as in I've Loved You So Long) or in a supporting role (as she is here or in Tell No One).

For Lennon fans, Nowhere Boy really should be seen. For film fans in general, it provides a slice of life that's worth your time.

Comments:
As a Lennon/Beatles fan, and a film fan, I very much want to see this (it's why it's in my Netflix queue). Great look at this, Ed. And I love Kristin Scott Thomas, but not because of THE ENGLISH PATIENT (which tried my nerves no end). Thanks for this, Ed.