An hour of waiting for the inevitable to happen 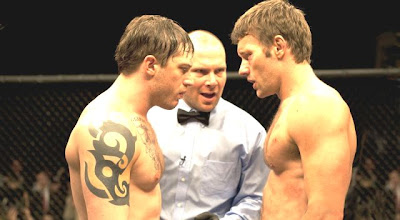 By Edward Copeland
There is predictability and then there is predictability. After that, comes Warrior, where any moviegoer who has seen more than a dozen or two family dramas and sports films in his or her lifetime will be able to outline every beat the screenplay by director Gavin O'Connor, Anthony Tambakis & Cliff Dorfman will hit before the film reaches the 40-minute mark. Unfortunately, Warrior runs for nearly another 100 minutes after that.

The biggest surprise that Warrior was able to come up with occurred when the Screen Actors Guild Awards announced its nominees for supporting actor and named Nick Nolte for Warrior, the first time I'd even heard of the film. Ahhh, ignorance was bliss. I do have to say that while Warrior turns out to be a chore to sit through, Nolte, lead Joel Edgerton and Tom Hardy, who falls somewhere in between, all perform well. It's just a shame that the three aren't acting in service of a script that deserves their talent.

You might think that I exaggerate how by-the-numbers the details in Warrior play out, but it must have been evident to the filmmakers as well since the posters and promo material all highlight the climactic fight, so fear of spoilers wasn't high on their agenda.

Edgerton, who was good as one of the many criminal thugs in Animal Kingdom, plays Brendan Conlon, a high school science teacher facing imminent foreclosure on his house because of the money problems caused by medical bills for his daughter's heart problem. One night, the former fighter signs up for a parking lot contest based on Ultimate Fighting and picks up some easy cash — as well as suspension from his teaching job. Around this time, I began to dream of a different high school science teacher who didn't become a fighter to provide for his family but began to cook crystal meth instead. Sigh.

Despite objections from his wife Tess (Jennifer Morrison, who was so good as Cameron on House but struggles with the worst melodramatic dialogue here), Brendan decides to pursue mixed-martial arts to make money, especially when he hears about Sparta, a massive Atlantic City single-elimination event financed by a rich entrepreneur with a $5 million purse. He reluctantly turns to his estranged, reformed alcoholic father Paddy (Nolte) to help him train.

That gets to be too much for him as his father tries to use the training as a way to worm his way back into his son's life and to that of his granddaughters, one of whom he's never met. Brendan turns to a former fighter pal of his turned trainer Frank (Frank Grillo) to help him get ready. Meanwhile, Brendan's younger brother Tommy (Tom Brady) reappears, using his mother's maiden name Riordan as a last name after a tour in Iraq. Troops in Iraq recognize him on a tape demolishing a mixed-martial arts champ as the Marine who saved their lives and then vanished.

Tommy stayed with Paddy through all of his rough drinking years and though he doesn't have much use for him, he starts training with him as well. Can you see where all this is headed yet? Let's see — we have a troubled, recovering alcoholic (I wonder if he'll fall off the wagon at some point), two brothers competing in the same sport, aiming for the same big-money event (hmmm…I wonder who will be in the final match? Oh yeah — the poster and promo art gives that away even if it weren't painfully obvious anyway). I forgot to explain that the announcers at Sparta say Tommy Riordan is "Google-proof" because no one has any information on him, yet they know he's a war hero though the Marines have no records on him and no one puts it together that his trainer has the same last night as one of the other competitors.

What truly makes Warrior such a grind to get through is that since we know how the final match of Sparta will wind up, that event starts at the 1 hour, 15 minute mark of the movie, meaning we have to sit through almost an hour of Tommy and Brendan fighting other contenders when there's no doubt who the victor will be. The only mystery comes from which of the two brothers the movie will allow to win. I started thinking of the seventh season episode of Scrubs "My Manhood" when J.D. whips Turk in public and Turk feels he has to save face by getting him back but J.D. doesn't want to his infant son seeing his butt kicked. Trying to think of a solution to the problem, the two shout in unison, "Rocky III freeze-frame ending!" It made me laugh in fear that Warrior would go that route.

To its credit, Warrior doesn't end that way, but no ending would be prove satisfying after the mess that preceded it. I knew director O'Connor's name sounded familiar and was surprised to see he wrote and directed the nice 1999 film Tumbleweeds with the great Janet McTeer performance, which couldn't be any further removed from Warrior. It's a shame that in 12 years he went from that passable indie feature to this formulaic drivel.