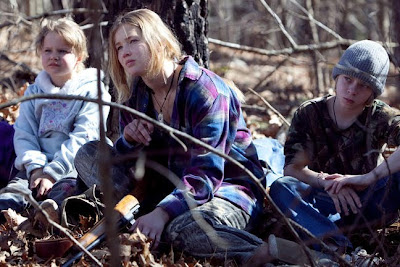 By Edward Copeland
You don't need a complicated story with oodles of characters to produce a fantastic film, not that either are bad things (You are talking to a committed Nashville worshipper after all), and the lean grace of Winter's Bone proves it.

Adapted by director Debra Granik and Anna Rosellini from the novel by Daniel Woodrell, Winter's Bone spins the sad but realistic portrait of life in the Ozarks for a 17-year-old girl named Ree Dolly (Jennifer Lawrence in a powerful, starmaking performance).

Ree might not literally have the weight of the world on her shoulders, but she bears so much of the brunt of her family's turmoil that it might as well be the entire universe. Ree dreams of an escape into the Army and given her situation, who can blame her? Unfortunately, that's not an option: She's trapped. She's primary caregiver for two young siblings, principle caretaker for a dying farm due to a catatonic mother and a missing dad caught up in the meth-making business who disappears for long periods of time and, if those weren't burdens enough, her father put their property up as bond for his most recent run-in with the law and no one can find him. So, as the sheriff (Garret Dillahunt) informs Ree, if he misses his court date, Ree and her family will be evicted.

Since the sheriff can't seem to locate him, Ree sets out on her own to find her old man. The only problem is that with the woodspeople in the area, most of whom are related by blood, helping each other doesn't outweigh keeping your mouth shut and not stirring up trouble. Ree, however, isn't one who's content to abide by the warped rules of the society she was unfortunate enough to be born into, even if it means that it will prove her father's dead and she might join him in that eternal reward by disturbing the wrong people.

Far too often when filmmakers choose a setting such as the Ozark backwoods where Winter's Bone takes place, it all comes off as fake with monstrously condescending accents. Thanks to Granik's direction and a peerless cast, the film almost comes off as a documentary. In fact, very few things give any indication of what year the film takes place in. Michael McDonough's cinematography paints the cinematic canvas in such grayish hues that it's simultaneously sad and beautiful and perfectly complements the story's mood.

While the wondrous Lawrence deserves most of the credit for keeping the film on course as an Ozark version of Odysseus and occupies nearly every frame, other actors wow as well. Dillahunt isn't the only Deadwood alumnus present. John Hawkes, the great HBO Western's kind general store operator Sol Starr, turns in a completely different type of performance as Teardrop, Ree's rage-filled, speed-addicted uncle.

The real surprise though is the actress Dale Dickey, who probably would be most recognizable as the hilarious hooker Patty on the comedy My Name Is Earl (though she has some previous meth experience in a particularly memorable appearance on Breaking Bad) as a distant relative who warns Ree away, turns particularly brutal and still ends up helpful in her own twisted way.

Lawrence though is the main attraction. From the moment she appears on screen, she captures the viewer's attention by the throat and doesn't let go. It's really great when a film and a performance come out of Sundance gets showered with praise and doesn't turn out to be a disappointment once the rest of the world gets the opportunity to see them.