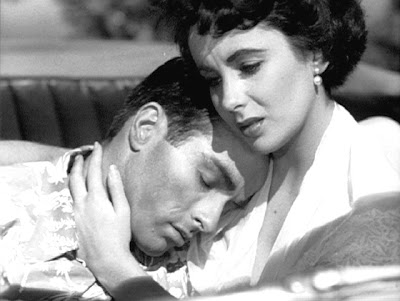 “A Place in the Sun was done right before I met George. It hadn’t come out yet, when I came to Paramount, but it had been finished. I remember seeing that film and being devastated by it. It was different in many ways than any film I had seen before coming out of Hollywood — including the style of other films by George Stevens. The use of close-ups in that film, the use of that liquid dissolve on top of dissolve in the love scenes between Montgomery Clift and Elizabeth Taylor is the quintessential height of romantic filmmaking. And the scenes with Elizabeth Taylor are done with these extraordinary close-ups. The love scenes — I don’t think there are better kiss scenes in the history of film. It’s hard to do a kissing scene. It’s hard to do a love scene. First of all, kisses — especially in those days in Hollywood — when you could show nothing else, were supposed to indicate every kind of orgasmic pleasure, every kind of romantic fulfillment — and if lovers start to kiss too intensely on the screen, it can become embarrassing for the audience. What George did was that the camera came in and did a lot of the work. The camera came so close, dealing with two of the most beautiful faces in the world. I think the camera treasured those faces, and made them almost become one.” — director Alan J. Pakula

By John Cochrane
Today marks the 60th anniversary of the release of George Stevens’ 1951 film A Place in the Sun, a tragic romance that is one of the best motion pictures ever to come out of the Hollywood studio system. An updated abridgement of Theodore Dreiser’s epic novel An American Tragedy (1925) and its stage adaptation by Patrick Kearney, A Place in the Sun stars Montgomery Clift as George Eastman — a drifting, but earnest war veteran who seeks employment at his rich uncle’s clothing factory. George dreams of leaving his poor, staunchly religious upbringing behind and escaping into the privileged world of his relatives. Instead, he is ensnared in an ill-fated love triangle, and eventually accused of drowning of Alice Tripp — a plain co-worker that he once secretly dated and impregnated — so that he can be with Angela Vickers, a young and beautiful socialite with whom he has fallen deeply in love.

Based on the real life trial and execution of Chester Gillette in 1906, An American Tragedy is considered a classic of American fiction — its plot seemingly straight out of the murder ballads of American folk music. But its sprawling story already had been filmed by Josef von Sternberg in 1931, and Paramount was not eager to make the picture again. Using his already sizable talent and industry experience, producer/director George Stevens changed the characters names, recast the story after World War II, and cut the first third of the book — which depicts more of the protagonist’s youth and family life and his involvement as a passenger in a fatal car accident. Stevens also shifted the tone away from a more sympathetic tone for Alice and toward the blossoming relationship between George and Angela — capitalizing on the good looks and strong on-screen rapport of Clift and Elizabeth Taylor, in her first adult role. This change in audience identification becomes pivotal in the scene on the lake between George and Alice, where it becomes clear that although George has lured his ex-girlfriend to her demise, he does not have the heart to follow through with it.

Working with cinematographer William C. Mellor, Stevens avoids flashy photography, instead employing understated master shots — creating the feeling of an impartial observer who is watching fate play itself out. Only when George and Angela’s love affair takes off toward the middle of the film, do we really start to see 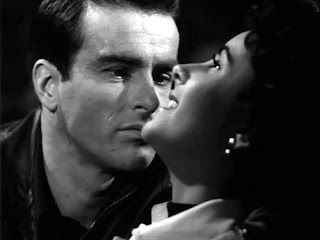 intimate close-ups — including tight over-the-shoulder shots, which draw the audience into their doomed courtship. Stevens and his editor William Hornbeck also are very effective in their use of montages, dissolves and wipes to condense the story’s plot to its simple essence. Throughout the movie, we see images superimposed on top of one another, indicating what or who a character is thinking about, or what is going on simultaneously in the story. This creates a number of unforgettable images — including a repeated motif showing George as a trapped outsider, and a distant shot of Angela in her room after George has been put on trial for murder — his newspaper picture burning up in a fireplace in the foreground. Believing that preparation and editing are the key ingredients in creating an effective motion picture, Stevens shot a lot of footage to cover himself in post-production. The result paid off in one of the best looking, effortlessly paced films ever made in Hollywood.

Beyond the technical aspects, much of the success of A Place in the Sun comes from its cast. Montgomery Clift plays George Eastman with the perfect amount of dread and vulnerability — damned by forces that are beyond his control, and in some cases by his own poor decisions that have come back to haunt him. In his book Who The Hell’s In It: Conversations with Hollywood's Legendary Actors, director, film historian and critic Peter Bogdanovich calls Clift, “the purest, least mannered of the method actors; perhaps the most sensitive, certainly the most poetic.” In addition to impossibly good looks, Montgomery Clift’s eyes are among the most tragic and unforgettable in the history of cinema. George truly sees himself as a victim of circumstance, but you can’t help but identify or feel sorry for his character. During the closing scenes in court and jail, as he comes to terms with his guilty conscience and accepts his fate, it’s impossible to imagine anyone else but Montgomery Clift in the part. 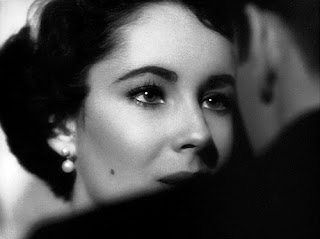 As the glamorous and energetic Angela Vickers, two-time Academy Award-winner Elizabeth Taylor — already considered one of the most beautiful women in the world at 17 — moves beyond the family films of her childhood to match Clift’s intensity and intuitive acting. Together, they create heart-rending scenes of initial hope and happiness, and then despair. Lines that might sound corny or false coming from others such as “It always seems like we spend the best part of our time saying goodbye” and “Love me for as long as I live, then forget me” ring true. You can feel the passion radiating from the screen. In an industry where genuine romantic chemistry is sought often and extremely hard to come by, they had it. 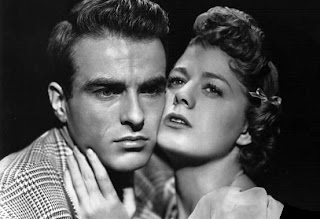 The third part of the triangle, Shelley Winters began her career as a blonde bombshell. She fought to be cast in the film against type — even going as far to attend a meeting with Stevens in drab disguise in order to get a screen test. She plays Alice as clingy, insecure and increasingly desperate — but not unreasonable or unsympathetic. Winters was so believable in the part that she would go onto play more vulnerable, doomed women who are manipulated by the men they love in Charles Laughton’s The Night of the Hunter (1955) and Stanley Kubrick’s Lolita (1962), eventually winning two supporting actress Oscars — including one for George Stevens’ The Diary of Anne Frank (1959). Rounding out the cast is a pre-Perry Mason Raymond Burr as the aggressive prosecutor Mr. Marlowe — in a righteously determined supporting role that would foreshadow his future career.

Despite the 12-year-age difference, Montgomery Clift and Elizabeth Taylor would remain great friends for life until Clift’s tragically early death in 1966. They would work together in two more pictures — once again as star-crossed lovers in Raintree County (1956) — a Gone With the Wind (1939) knock-off during which Taylor helped save a badly injured Clift’s life in a real-life car accident, and as a doctor and troubled patient in Suddenly Last Summer (1959) — a psychodrama based on the Tennessee Williams play. But neither film would approach the beauty of A Place in the Sun — which won six well-deserved Oscars at the Academy Awards for 1951, for directing, black & white cinematography, film editing, music score of a dramatic or comedy picture, black & white costume design, and writing (screenplay). Its only losses were actor (Clift) to Humphrey Bogart in The African Queen, actress (Winters) to Vivien Leigh in A Streetcar Named Desire, and picture to Vincente Minnelli’s musical An American in Paris.

George Stevens (1904-1975) is a figure whose name is not mentioned in film circles nowadays as often as it should be — probably because like other great directors such as Sidney Lumet and Louis Malle, he made terrific films in a number of different styles and genres, rather than developing an immediately identifiable brand — such as a John Ford or Alfred Hitchcock. Cutting his teeth as a cinematographer and gag writer for many of the Laurel & Hardy shorts, Stevens would go on to film such enduring pictures as the adventure movie Gunga 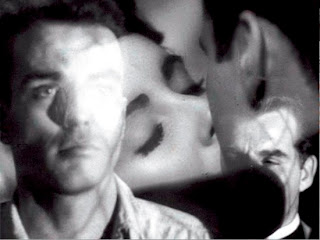 Din (1939), staring Cary Grant and Douglas Fairbanks Jr., the classic Western Shane (1953), and Swing Time (1936) — considered by many of be the best of the Astaire and Rogers musicals. After volunteering and serving as a major in World War II, where he filmed vital, historic footage at Normandy and Dachau, his films show an increased depth and seriousness about the human condition. Nominated five times for best director, he won a second directing Oscar for Giant (1956), an epic soap opera with buried anti-racism themes which turned out to be James Dean's third and final film. It plays in many ways like a forerunner of such television shows as Dallas and Dynasty. In 1966, Stevens sued NBC Television and Paramount Pictures in an effort to prevent showing A Place in the Sun on television with commercials inserted — a battle that he would eventually lose, but that showed his commitment to the art of cinema — a gesture that was not lost on the other Hollywood filmmakers who had held him in high regard for years. Driving his family home from the Academy Awards — his best director Oscar for A Place in the Sun sitting between them — Stevens smiled at his over-excited son, George Jr., saying “We’ll have a better idea of what kind of picture this is, in about 25 years.” But the verdict on this timeless and distinctly American classic has never been in question.

Comments:
I've honestly never been particularly moved by Winters here. I suppose it's the character but she always comes across as unnecessarily cloying (and this could be heresy, but Scarlet Johansson averts that when she does her take on the character as Nola in Match Point). It's Elizabeth who I would have given that nomination too, she's so earnest here and her final scene always moves me.

A fine film, no doubt.

I agree that Taylor's is the better performance and deserved to be nominated, but I suspect the industry wasn't ready to reward her in her first mature role. Winters was playing against her type -- which probably impressed the Academy -- though it's really a supporting performance. Sure, her character is not that likeable and Winters' acting is somewhat dated -- but I think that's the way Stevens wanted to contrast the two women and the lifestyles they represented. I like Shelley Winters' work and her characterization is not unsympathetic, but Elizabeth Taylor was more crucial to the film, as it's her scenes w/ Clift that linger in the memory afterwards. BTW, I liked "Match Point" a lot, and thought Johansson was terrific in that part - an interesting twist and update of the material.