From the Vault: Gone With the Wind 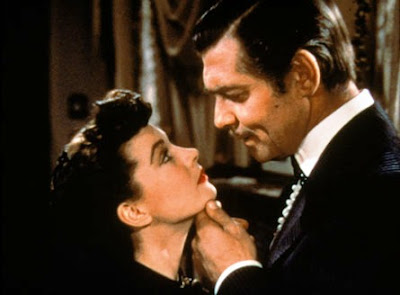 Even after 50 years, Gone With the Wind still manages to delight and entertain, especially when one gets the opportunity to see it projected on the big screen in all its Technicolor glory instead of viewing the faded copy that has played in recent years. Having seen the film many times before, I found myself focusing more on the visuals and trying to ignore the story, a quite difficult task when you have Clark Gable and Vivien Leigh's caustic chemistry to distract you.

This time, the hands of the director (or more accurately, directors) were more evident to me. I'm not sure if all the scenes and shots I liked should be attributed to Victor Fleming, George Cukor or Sam Wood, but the scenes were stunning no matter who directed them.

One sequence, which escaped my notice watching the film on television, depicts a minister speaking in front of large stained-glass window of Jesus Christ as an explosion rips through Christ's midsection. The minister continues to speak and the camera pulls back to reveal that the minister is speaking to a wounded soldier, one of many who have turned the church into a makeshift hospital.

The restoration also highlights other stunning shots and their vivid colors. There are some flaws in the print — certain parts still seem faded and occasionally blotches of red, blue and green bleed through the image.

The film itself may be unsurpassed in terms of storytelling, holding your interest for 222 minutes, something even films less than 90 minutes long have trouble doing today. In fact, one should admire Gone With the Wind for doing what television miniseries such as North and South do today at more than twice the running time.

The pacing flows naturally, with the exception of the final portion of the film beginning with Scarlett's acceptance of Rhett's marriage proposal. From there through the birth, life and death of their child and the resolution of the remainder of the film almost feels rushed.

Then again, who cares? When you build up to the final scene with no less than three memorable lines including the first, and arguably the most famous, piece of profanity ever put on screen. In 1939, Gable's "Frankly my dear, I don't give a damn" shocked and almost didn't make the cut. Thank goodness it did.

The main problem I've always had with Gone With the Wind still bothered me when I watched it again and that problem is named Leslie Howard as Ashley Wilkes. Having never read Margaret Mitchell's classic novel, I don't know if the problem lies in Wilkes' character or in Howard's interpretation, but he has always bothered me as being weaker than the rest of the cast.

Howard looks too gaunt, too bland and too boring to be believable as someone Scarlett would carry a torch for for decades. His indecisiveness and weakness seems unbecoming for someone who's supposed to be a leading officer in the Confederate Army.

Howard aside, the rest of the performances are unsurpassed. Olivia de Havilland stood out for this time. Melanie, the most kind person Rhett ever knew and Ashley's wife, could come off as a goody two-shoes, but de Havilland overcomes that. Melanie is nice and loyal, but you can see that she also is very bright. Scarlett may believe Melanie is naive, but the audience knows better.

It doesn't need to be said, but Gable excels as Rhett, who actually is on screen less than you might think, but the times when he is never bores. His sparks with Leigh stand with any of the great antagonistic love interests of all time.

What more can be said about Leigh that hasn't already been said. She is Scarlett O'Hara. You forget she's British, something you always notice as far as Howard is concerned. Her facial expressions, her delivery — nothing she does misses the mark. One forgets that this same actress made just as indelible an impression as a very different Southerner — Blanche DuBois — 12 years later.

Don't know if you'll see this as it's an older post. However....If you haven't seen the documentary on "The Making of GWTW" narrated by Christoper Plummer you should try to catch it. Leslie Howard basically didn't want to do the film and had to be bribed with a promise that he could do something else (Intermezzo if memory serves) in return. He steadfastly refused to read the book, which was too bad. The part as written in the novel was tricky but doable and he'd have been perfect for the role if he'd had his heart in it. That was no doubt why Selznick kept him on in spite of everything....Anyway, the documentary is highly entertaining in its own right. And you have no idea what a godsend Vivien Leigh really was until you've seen the screen tests by the other actresses who were finalists for Scarlett!

The film's having multiple directors appears to have been a huge benefit, for George Cukor's nuanced work with the actresses and Victor Fleming's work with Gable gives us a movie where the men and the women truly emerge as humans. Of course, this all reminds me of the entry in Marlene Dietrich's diary:
"Saw GWTW tonight. Leslie Howard with orange hair. Now I've seen everything."

I first watched GWTW at the Highland Theater in Albuquerque in the mid-1970's with my mom and dad. GWTW was my dad's all-time favorite movie, and he insisted we go. I was probably 10 at the time and man am I glad my parents took me to the movie. The Higland was built in the 1940's or 1950's and sat around 900 with a balcony. Terrific venue for a terrific film. Leslie Howard was definitely the only weakness of the film - his performance is forgetable. Every other character and actor stands out to me to this day, and I've not seen GWTW in at least 25 years. The aftermath of the Battle of Atlanta scene could never be made correctly today, thatt scene is phenomenal! I will have to watch the movie again as soon as possible, especially to see the incredible Vivian Leigh!