"If You Want to See the Girl Next Door, Go Next Door" 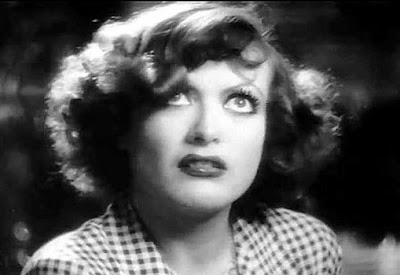 By Eddie Selover
More than anything else, it was a book that turned me into a movie buff: David Shipman’s The Great Movie Stars: The Golden Years. This was the first comprehensive set of star biographies, and in those pre-video days of the early '70s, it told tantalizing tales of films I had no hope of seeing unless they turned up on the late show. Shipman wrote marvelously about many actors and actresses, but maybe too well — his opinions had a way of soaking in. The actors he cared about (Judy Garland, Buster Keaton, Greta Garbo, Deanna Durbin) got love letters, while those he didn’t were pretty much excoriated.

Joan Crawford was one of the latter. The entry on Crawford starts with a putdown by Humphrey Bogart, and Shipman goes on to call her “not much of an actress…as tough as old boots” and to conclude that “she achieved little…her repertory of gestures and expressions was severely limited…(her shoulders) were always so much more eloquent than her face.” And that’s just the introduction. His survey of her career is peppered with words like “artificial,” “heavy,” “monotonous” and “hysterical.” So even before I’d seen most of her work, I was a bit prejudiced against Crawford. 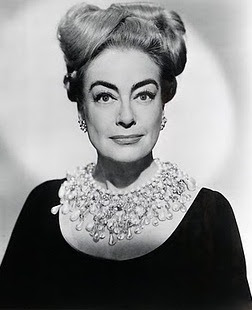 When I finally did, she made it hard to disagree. Her appearance, for one thing. Increasingly through her career, she covered her face in grotesque Kabuki makeup — huge outsized lips, big Groucho eyebrows, piles of dead-looking hair. Her body language was stiff and somewhat mannish, and she did throw her shoulders around a lot. She was especially fond of squaring them off when confronting some hapless male — often a weakling such as Van Heflin, Zachary Scott or Wendell Corey. Although, to be fair, she made most men look weak, even big macho guys such as Jeff Chandler, Jack Palance or Sterling Hayden. When she turned her huge, furious, reproachful eyes on them, they all seemed to shrivel. So did I. If a movie star is someone you idly daydream about making out with, Miss Crawford did not do it for me.

Maybe I just needed to grow up, because sometime in my 40s, I started to change my mind. By then I’d seen some of her best work: Possessed, Grand Hotel, The Women, Strange Cargo, Mildred Pierce. Of course, in these movies she had vivid co-stars and wasn’t the whole show; I still didn’t think she was a very good actress, or even particularly attractive. 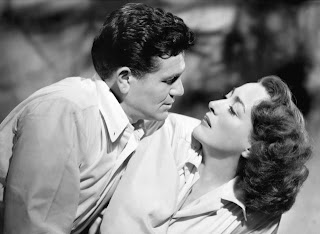 What finally turned me around was Humoresque. It’s a big, thundering '40s soap opera about a struggling young violin prodigy from the New York ghetto (John Garfield) who is taken up socially, artistically and sexually by a rich older married woman. This role is a field day for Crawford, who gets to fling diamond-hard insults (written by Clifford Odets), ride a horse passionately, have an orgasm during a violin concerto, smash martini glasses against the paneling of swanky bars, and walk into the surf in full evening wear. Ridiculous. And yet she’s gorgeous to look at and completely persuasive as an actor. At every moment, she makes you aware that this is a woman who doesn’t like herself, whose loveless marriage for money has left her bitter and empty. Her awakening from cynicism into love, and her desperate awareness that it’s come too late to help her, is finally quite heartbreaking.

She was a hard woman, no doubt about it. She had a terrible childhood — abandoned by her father, carted around the slums of El Paso by her impoverished mother, learning much too early that men were a meal ticket and what the price of that ticket was. She was rumored to have made a stag film, to have been a stripper and a hooker. When she arrived in Hollywood in her early 20s, one observer remembered her as “an obvious strumpet.” Show people can be terrible snobs and the unconcealed disdain of her colleagues must have marked her deeply. Her whole life seems to have been an effort to scour off the dirt of West Texas and make a lady of herself. More than most performers, she kept reinventing herself and assuming new identities. Born Lucille LeSueur, she became Billie Cassin and then Joan Arden before the studio ran a contest to come up with Joan Crawford. She often spoke of how the movie industry educated her about virtually everything. When you watch her, you can feel the untold hours of effort she has put into her appearance, her diction, and her carriage, to covering up her dark, freckled skin. Much of her falseness comes from this fierce determination to be someone else — someone better.

But it’s also where her power comes from. For example, in Strange Cargo, she plays a prostitute in everything but name (the Production Code was in full force). Although she was at the height of her stardom, 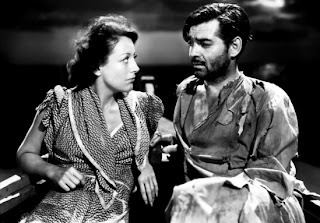 and working with Clark Gable in his first movie after Gone With the Wind, she gives absolutely no quarter. Whatever her own experiences, she makes a mighty convincing whore — cold and hardened on the surface, bitter and hurt underneath, and deeply wounded and desperate at the core. She has a great moment where she tries to pretty herself up a little bit after days of crawling through the jungle, and Gable laughs at her in the cruelest and most disrespectful way. She maintains her toughness with him, but lets you see the immensity of her shame and self-loathing. She handles the character’s eventual transformation into a sweet and hopeful woman very subtly and convincingly as well. At no point does she signal that she’s a big star, or a lady pretending. She doesn’t ask for sympathy — she earns it.

Crawford didn’t act in many comedies, and when she did she was often grimly unfunny (They All Kissed the Bride, a misogynistic screwball farce intended for Carole Lombard, is Exhibit A). She did have a sense of humor, but it was too black and caustic to work in the frothy nonsense of her era. However, just once she was awesomely funny: in The Women, playing a comic version of her own tough persona. She plays Crystal Allen (a wonderful name for a hard, glittering woman). In her first scene, she’s on the phone with her married lover, who is trying to cancel his date with her to be with his family. On the phone, she’s a parody of a sweet innocent young thing. But fending off the interjections and insults of her disbelieving co-workers, she’s matter-of-factly rapacious and cynical. When she finally gets him to cancel on his wife and come to her place instead, she does a silent little shoulder-shaking fist pump of victory…the kind of moment that makes you fall in love with a performer. “How do you like that guy?” she snaps, and then spitting out the last word: “He wanted to stand me up for his wife!”

And, of course, there’s Mildred Pierce, her famous Academy Award-winning role. Earlier this year, in HBO’s epic miniseries, Kate Winslet played Mildred exactly as written by James M. Cain — a mixture of likable and dislikable qualities. Mildred is plucky, determined, indomitable and cunning but also naïve, clueless, misguided and weak. This is not the woman Joan Crawford played. Her Mildred may be determined, but she has only the noblest intentions. The drama of the movie is the series of betrayals and humiliations Mildred undergoes at the hands of virtually everyone she trusts. Many commentators over the years have pointed out the obvious irony of Crawford, the abusive mom-from-hell of Christina Crawford’s Mommie Dearest, winning an Oscar for playing an over-indulgent mother whose only sin is loving and spoiling her daughter to excess. But clearly it was more complicated than that — Joan and Christina’s relationship seems to have been a pitched battle of wills that extended beyond the grave. Something many of us can relate to, in fact. 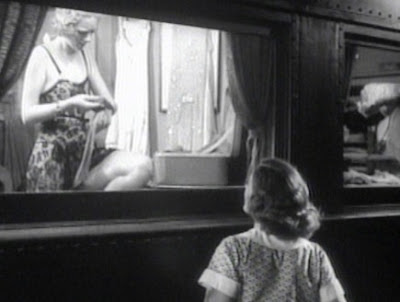 But Joan Crawford didn’t want complexity. Life, as she knew better than most, is a messy, dirty, terrifying business. Her response was to envision something better, and go after it with laser-like intensity. In 1931’s 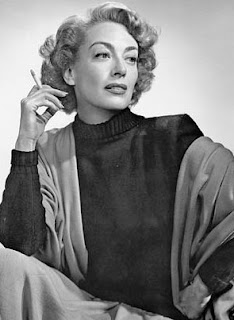 Possessed (the first of two movies she made with this title), she plays a poor girl in a working class town who can’t reconcile herself to marriage to a cloddish boyfriend and a life of drudgery. One evening, a train pulls into town. She stands there in her cheap dress, looking at the train windows as they pass slowly by, revealing a series of elegant tableaux: rich passengers dressing up, dancing, drinking cocktails, being attended to by servants. Her longing is palpable. She’s still years away from becoming the implacable survivor staring down the world. She’s young and full of hope, and you’re with her all the way when the train stops and she impulsively hops on board, leaving her squalid life behind.

Of course, we don’t leave ourselves or our demons behind when we try to move onward and upward — that’s only in the movies. Shipman’s book includes a famous put-down of Crawford’s unnuanced acting by F. Scott Fitzgerald, who wrote screenplays for her during the '30s. He missed the larger truth about her, the larger performance that her life was all about. He’d have recognized her if he’d looked more deeply, because in her unwavering faith that beauty, money, and class can erase all the compromises necessary to achieve them, Joan Crawford was as quintessentially American as Jay Gatsby.

Comments:
This is a little off topic, but I was curious: Why did you choose to use the Joan Crawford-Madonna mash-up picture?

I've been so busy this past couple of weeks. Eddie (Selover, not Copeland) picked his own art. I'm guessing you are talking about that top one. I thought it looked eerily like Joan as Madonna

Hi Edward! I figured Eddie Selover picked the photo, I thought he might be reading here. I thought there might be a connection I wasn't making between the article and picture, which is why I asked.

That pic is actually a mash-up. Someone took a picture of Madonna from Suddenly Seeking Susan and pasted Joan's face from Rain into it.

I'll ask him if that's what he meant to do. I've been on a nonstop two week run of finishing one thing after another (with an unscheduled Peter Falk obit tossed in) so I haven't been staying on top on a lot of the other stuff as closely as I should and have been relying on help to get the other contributors edited and posted.

The notion of pre-video in this age of Netflix is mind-shattering.

What a great blog you have here! Keep it up!