When Mildred first met the masses 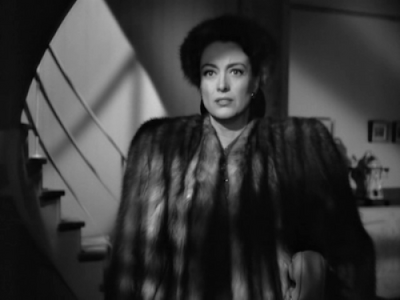 By Edward Copeland
In anticipation of Todd Haynes' new HBO miniseries adaptation of Mildred Pierce, which premieres Sunday and hews more closely to James M. Cain's original novel than Michael Curtiz's 1945 film did, I felt that it was worth re-visiting the first film take on the story since I've always loved it, before I start the process of comparing it to the new version.

Curtiz's film starts off with a bang or, more literally, three bangs as we hear three gunshots and Monte Beragon (Zachary Scott) hits the floor dead, the revolver that did him in tossed at his body, We see someone hastily exit the house and speed away. The next thing we see is Mildred Pierce Beragon herself (Oscar winner Joan Crawford), draped in her fur coat, wandering the pier past the restaurant that once was her own. She 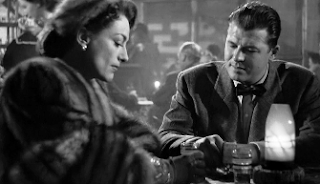 walks further down staring at the choppy waters below, looking as if she's considering taking a leap over the side until a beat cop (Garry Owen) notices what she seems to be up to and urges her to stop, telling her that if she jumps in then he'll have to jump in after her and he's not particularly in the mood for getting wet. Eventually the officer's jawing convinces Mildred to move along and she heads back. Wally Fay (the underrated and largely forgotten Jack Carson) knocks on the window of the restaurant and invites Mildred in for a free drink, saying it's the least he can do since buying her out of the place was the best investment he's ever made, so Mildred, still obviously preoccupied, agrees to sit for a drink. As he always has (since childhood apparently), Wally puts the moves on Mildred, but she brushes him off. As they are finishing their drink, Mildred suggests that they go to the beachhouse for a nightcap and Wally's all for it, seeing it as an opportunity to make his long-lingering dreams come true. They get in Wally's car and drive up to the house as Mildred unlocks the door, Wally asks where Monte is or if he has suddenly become broadminded.

Once inside, Wally finds a darkened house and heads straight to the bar to start preparing drinks for the two of them. Mildred still seems distracted. She finally pulls herself together and says she's going to go change clothes. Wally, who is quite the chatterbox, asks her to keep the door open so he can keep talking to her. "Something about the sound of my own voice just fascinates me," he tells her. She says she will, but as Wally prattles on, he notices the sound of her door closing. He goes to check it out. It's locked. He tries to get her attention but gets no answer. He checks the others doors but finds they are all locked — and then he stumbles across Monte's dead body.

Not thrilled that Mildred had tricked him into a locked beachhouse with the corpse of her murdered husband, Wally uses a chair to break a window and scramble down the side of the house — just as the police arrive. He 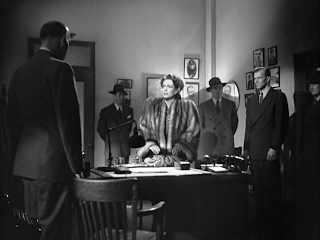 doesn't make any effort to get away after they fire shots at him, at first assuming he's a burglar, but as one officer watches Wally while the other checks out the house Wally tells him that there's a stiff inside. The other cop returns and the policeman watching Wally tells his partner, "Say, he says there's a dead guy in the house." "You never saw deader," the other cop replies. Meanwhile, Mildred returns to her house where not only is her daughter Veda (Oscar nominee Ann Blyth) awaiting her but so are two detectives, who ask her to come with them. Once they get outside the residence, they tell her they didn't want to break the news in front of her daughter but her husband has been found murdered. They take her to the police station where, as her old friend and manager of her restaurant, Ida Corwin (the delightful Oscar-nominated Eve Arden) says, it looks like a class reunion. Present are Ida, Wally and Mildred's first husband Bert (Bruce Bennett) as well as Mildred. The remainder of Mildred Pierce unfolds in flashback to lead up to those shots someone pumped into Mildred's second husband Monty when Mildred objects when the police pin the crime on Bert.

I've seen Mildred Pierce probably about five or six times in my lifetime, including this week's viewing, and I've always liked it a lot even if I've never found it to be a perfect movie. All the previous times I watched it I came with zero knowledge of the Cain novel upon which it was based and I had not watched a new miniseries that stuck closer to Cain's original story. I did my best to view the 1945 film the way I had before and while I still like the 1945 Mildred Pierce a lot, it just pales when you know what they did to Cain's story and how much of an improvement the HBO miniseries turns out to be, but I swore this post would concentrate on Curtiz's film and not get into the comparison game. (That post comes Friday).

The one thing that always has bothered me about Mildred Pierce is that while it's mostly well acted, Joan Crawford's Oscar-winning turn as the title character actually turns out to be one of the least-interesting characters in the movie. I have only seen three of the five best actress nominees that year and Crawford deserved it over Ingrid Bergman for The Bells of St. Mary's, but I haven't seen Greer Garson in The Valley of Decision or Jennifer Jones in Love Letters to make judgments on them. I can say decisively though that of the three I have seen, it's not close — Gene Tierney deserved the prize for Leave Her to Heaven. Crawford's Mildred shows very little range, whether she's raging at a cheating spouse, losing her restaurant or a dying young daughter or her constant attempts to please her evil incarnate of a daughter named Veda. It's even more apparent when you put her in scenes with the likes of Arden, Carson, Blyth and, to a lesser extent, Scott, because they all wipe her off the screen.

Though it's structured as a noirish murder mystery, once Mildred Pierce goes into its flashback mode telling her story, the crime is mostly an afterthought as the film charts her rise and fall as a successful restaurateur, ruined by her need to give her grasping high maintenance daughter Veda everything Veda thinks the world owes her and the added burden of paying the bills of her second husband (Scott), once a rich, well-known playboy but now basically her gigolo. As Monte tells Mildred when she asks him what he does for a living, "I loaf, in a decorative and highly charming manner." Mildred finally does dump him for awhile, but in her neverending quest to keep Veda near, goes to the extreme of marrying him, hope his lifestyle, albeit a fake one, will lure the snobbish and superficial spawn back into her graces. Since Mildred is supposed to be talking to a police detective in her effort to convince him that Bert didn't kill Monte, we often hear her in voiceover, but it comes in so infrequently, that it's sometimes jarring.

The film glides along so well because it's been placed in the hands of one of Hollywood's best workman directors in Curtiz whose best film remains the incomparable Casablanca but also helmed movies as diverse as Captain Blood, The Adventures of Robin Hood, Angels With Dirty Faces, Yankee Doodle Dandy, Young Man With a Horn and White Christmas. He's really telling a story that's a melodrama, not a murder mystery. The other weakness Curtiz faces is the casting of Bruce Bennett as Mildred's first husband Bert. Bennett's acting not only is stiff, his character has to be portrayed as one of the most upstanding individuals that ever left his family for another woman. 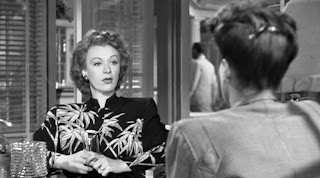 The key to making it work are his supporting players and the dialogue, some of which comes from the Cain novel but a lot of the best lines whose credit goes to named screenwriter Ranald MacDougall, uncredited writers William Faulkner and Catherine Turney and improvs and ad libs from the cast themselves. Arden, who plays Ida who meets Mildred as a diner manager who hires her as a waitress and later becomes Mildred's business partner gets the bulk of the movie's best lines. When Monte says he's always tried to avoid work, Ida quips, "You were probably frightened by a callus at an early age." When Mildred complains about what she's going to do about Veda, Ida responds, "Personally, Veda's got me convinced that alligators have the right idea. They eat their young."

In the end, Mildred Pierce is not a movie trying to determine who killed someone but a story of a woman who builds a successful life for herself but ruins it with her unhealthy attachment to a spoiled, resentful shrew of an offspring. The 1945 film remains enjoyable, but it doesn't tell the true story that James M. Cain wrote, but that version will premiere Sunday. I'll tell you more about it Friday.