BLOGGER'S NOTE: This post originally appeared Jan. 18, 2010. I'm re-posting it as part of The Howard Hawks Blogathon occurring through May 31 at Seetimaar — Diary of a Movie Lover 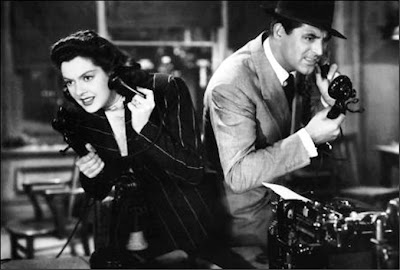 By Edward Copeland
The list of remakes that exceed the original is a short one, especially when the original was a good one, but there never has been a better remake than Howard Hawks' His Girl Friday, which took the brilliance of The Front Page and turned it to genius by making its high-energy farce of an editor determined by hook or by crook to hang on to his star reporter by turning the roles of the two men into ex-spouses. Icing this delicious cake, which marks its 70th anniversary today, comes from casting Cary Grant and Rosalind Russell as the leads.

Words open His Girl Friday declaring that it takes place in the dark ages of journalism when getting that story justified anything short of murder, but insists that it bears no resemblance to the press of its day, 1940 in this case. What saddens me today is, despite the ethical lapses and underhandedness and downright lies 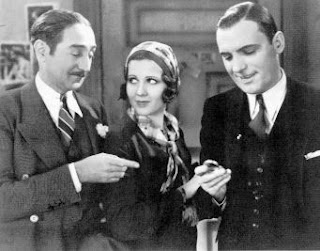 committed by the reporters in this version (and really all versions based on the original play The Front Page by Ben Hecht and Charles MacArthur, themselves once Chicago journalists), their energetic devotion to capturing the story seems downright heroic compared to the herd mentality and lack of intellectual curiosity we see exhibited most of the time today by pack journalists such as the White House press corps. It's really why the first two film versions of the play are the only ones that work. The 1931 Lewis Milestone adaptation starring Adolphe Menjou definitely belonged to its time and Hawks' take with its inspired twist came along close enough to remain relevant. When Billy Wilder tried to remake the original in 1974 as a period piece with Jack Lemmon and Walter Matthau, it fell flat because in the era of Vietnam and Watergate, journalists actually existed in a moment of heroism for their profession. The 1988 disaster Switching Channels returned to the His Girl Friday model with Burt Reynolds and Kathleen Turner and tried to set it in the world of cable news but the only update they came up with was hiding the fugitive in a copy machine instead of a rolltop desk.

Each time I write one of these anniversary tributes, no matter how many times I've seen the film in question (and I can't count that high when we're discussing Friday, I try to watch the movie again, in a quest for fresh thoughts and reminders of lines that may have slipped my mind. In nearly every, case I notice something new (and with the rapid-fire pace of Friday's dialogue, remembering them all borders on impossible). What stood out as I 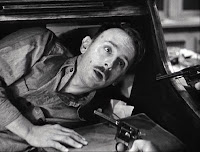 started this salute wasn't just the work-a-day newshounds it depicts compared to the state of the industry today but the social subtext emerged more prominently this time. It's not that I've missed or ignored it before, but it's the light-speed comic hijinks that keeps me coming back. The story's main focus may concern Walter Burns (Grant), that sneaky editor of the Morning Post, trying to keep his ex-wife Hildy Johnson (Russell) from leaving the paper and his life to wed insurance agent Bruce Baldwin, who looks like that fellow in the movies, you know, Ralph Bellamy (who fortunately plays Bruce). However, the story Walter uses to keep his hooks into Hildy concerns that of Earl Williams (John Qualen), a man who killed a cop and received a ticket on a bullet train to the gallows by a politically hungry Republican mayor with an eye on unseating the Democratic, anti-death penalty governor, despite the fact the reporters and many others believe Earl's mental 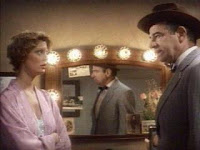 illness should stop his hanging. Qualen, a solid character actor in many films, and Mollie Malloy (Helen Mack), a woman who befriended Earl prior to the slaying and who the tabloids misrepresent as his lover and a prostitute, stand apart as the only characters in this screwball farce who play it completely straight. (In an all-time bit of miscasting, in the Wilder remake, Carol Burnett got the Mollie Malloy role. Of course, the nearly 50-year-old Jack Lemmon also was engaged to the 28-year-old Susan Sarandon in that film.) His Girl Friday requires neither Qualen nor Mack to garner laughs like every other character. As the courthouse reporters behave particularly cruelly to Mollie at one point, only Hildy comforts her. "They ain't human," Mollie cries. "I know," Hildy sympathizes. "They're newspapermen." Hildy realizes the jobless Earl spent too much time listening to socialist speeches in the park and his fascination with the concept of "production for use" led to his fatal error. 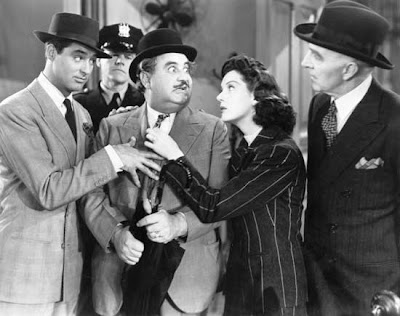 Social message aside, it's the earth-shattering cosmic comic chemistry of Grant and Russell, aided by Bellamy's perfect innocent foil and countless supporting vets. (One of them, Billy Gilbert, plays Mr. Pettibone (Roz holds his tie in the photo above) and I wish I could have found a good closeup photo of him because I think it's hysterical how much 9/11 mastermind/terrorist asshole Khalid Sheikh Mohammed resembles Gilbert in KSM's arrest mugshot.) The lines come fast and furious. While many do come from the original Hecht-MacArthur play, Hawks gets the credit for the film's amazing speed (though screenwriter Charles Lederer deserves more kudos). Still, in the end, Cary and Roz make the dialogue sizzle and Grant's physical touches serve as a master class in comic movement on film. Watch every little bounce he makes as Hildy kicks him beneath the table when he's trying to get things past poor Bruce and you'll crack up every time. Originally, I was writing down all my favorite lines, planning to try to work them all into this tribute, but then I thought: Maybe not everyone has seen His Girl Friday, even after 70 years, and I'm not going to spoil it for them.

Comments:
Actually 'Switching Channels' was an awesome movie. I watched it over two dozen times and still love it. It does not derserve haters, at all.

What people always forget that there is no right or wrong when it comes to opinions about movies. Opinions, by definition, are subjective. You liked Switching Channels. That means as far as you are concerned, it is a good film. I simply do not agree because it didn't entertain me or make me laugh even a fraction of the number of times that His Girl Friday or the original Front Page did. That doesn't mean that either one of us is more right or more wrong than the other. That's just how it is.