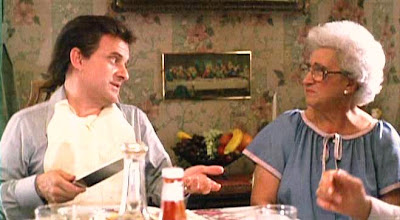 "She was the prototype of Italian parentage. If you could bottle her and spread it
around the world, there would be no need for social workers."
— Nicholas Pileggi on Catherine Scorsese at a family-style dinner serving her recipes
held in her honor following her death at 84 in 1997.
By Edward Copeland
Pileggi, the author of the nonfiction books Wiseguy and Casino, and co-writer of their film versions, Goodfellas and Casino, with Martin Scorsese was speaking of the director's late mother, who engendered that feeling in many in Martin Scorsese's extended film family. At the same time, her frequent appearances in her son's films (and other directors' movies as well) made Catherine Scorsese one of the most 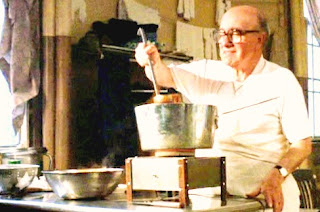 recognizable filmmaker's mothers who didn't work in show business to make a living. When Mrs. Scorsese did hold a job, she worked as a seamstress in New York's Garment District where she met Marty's father, Charles Scorsese, who toiled there as a clothes presser and also frequently appeared in their son's films as well until his death in 1993. Catherine Cappa, born 100 years ago today in New York to parents who emigrated from Sicily, also was a helluva cook, a gift passed down through generations of her family and Charles'. In fact, Catherine's culinary talents inspired the memorial dinner party that Suzanne Hamlin wrote about in The New York Times in February 1997. Catherine had gathered some of the best of the Scorsese and Cappa family recipes and published them in Italianamerican: The Scorsese Family Cookbook, which reached store shelves in December 1996. Unfortunately, her bout with Alzheimer's had advanced too far to allow her to promote the cookbook and she passed away the following month. I love Italian food and imagine consuming one of her dinners would have been one of the highlights of my life. However, her family recipes' reputation ring up resounding endorsements, but I imagine that her greatest creation of all goes by the name of Martin Charles Scorsese and her role in delivering that gift to the world prompted me to write this tribute to her today.

In the 1990 American Masters episode "Martin Scorsese Directs," Charles and Catherine discussed what their son's early life was like growing up in New York's Little Italy. The sound in this clip is missing at the beginning, but then it kicks in. 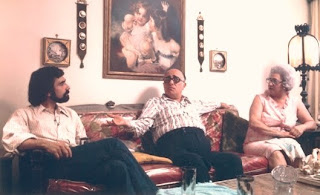 Martin Scorsese started putting his mother into small roles in his films from the beginning (Charles didn't show up on camera until Scorsese's 1974 short documentary on them, Italianamerican) for financial reasons: He couldn't afford to pay actors. Catherine's personality not only proved made for the camera but she also displayed a charming gift for improvising dialogue. She appeared in her son's very first short, a 1964 comedy called It's Not You, Murray, which co-starred Mardik Martin who co-wrote the short with Scorsese and would go to co-write the screenplays for Mean Streets, New York, New York and Raging Bull. The comedy short about an accidental crook also featured future SCTV star Andrea Martin (no relation to Mardik). Catherine turned up again in Who's That Knocking at My Door? and Mean Streets, both of which starred Harvey Keitel who attended that memorial dinner and said of Mrs. Scorsese, "In my memory, Catherine was the epitome of a warm, loving Italian mother. She enjoyed watching me eat as much as I enjoyed eating her cooking." Then, as his feature filmmaking career had started to really take off, Martin took some time to make that 45-minute short documentary Italianamerican where the real Catherine Scorsese shines in all her glory. This segment details his parents' recent visit to Italy.


The end credits for Italianamerican actually ran the family recipe for spaghetti sauce and meatballs. The next time that Catherine contributed to one of her son's films, she only put in a vocal appearance as Rupert Pupkin's hector mother constantly yelling at him from upstairs in the great The King of Comedy with longtime fan of her homemade pizza, Robert De Niro.

Catherine Scorsese's next two film roles actually occurred in films that weren't directed by her son. First, in 1986 she played a birthday party guest in Brian De Palma's alleged comedy starring Danny DeVito and Joe Piscopo. The next year, she waited to be served as a customer at the bakery in Norman Jewison's Moonstruck. Later, she would play a woman in a cafe in Francis Ford Coppola's The Godfather Part III. She also appeared in a 1994 movie called Men Lie that played a lot of film festivals, but I'm not sure if it ever received a theatrical release. Watch this promo and try to count how many actors in it eventually showed up on The Sopranos. 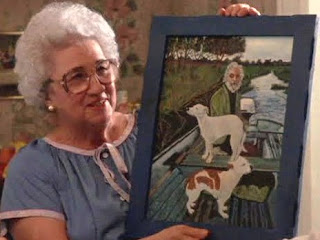 Catherine's next appearance in one of her son's film remains her longest and most memorable role as the lovable mother of Joe Pesci's psychotic mobster Tommy DeVito in Goodfellas. Pesci also attended the memorial dinner party for Katherine and told The Times, "Katie was one of the sweetest ladies I ever met. She was a true innocent. She never did anything bad; she never knew anything bad. In terms of her cooking, it's a toss-up as to who's a better cook, Katie or my mother." The hysterical scene where Tommy, Jimmy Conway (De Niro) and Henry Hill (Ray Liotta) drop by her house in the middle of the night looking for tools to dispose of a body in the trunk of Henry's car and she wakes up and insists on feeding them remains a classic scene in a film that's wall-to-wall classics. Of course, embedding Goodfellas clips from YouTube strictly won't be allowed, so you'll just have to click on that word "scene" to watch it again. However, we do have a clip from an AFI special where Jim Jarmusch interviews Martin Scorsese about his mother's role in the scene.


The next movie her son made, the role wasn't as plum as Tommy's mother — she merely shopped at a fruit stand in his Cape Fear remake. To promote the film, Marty appeared as a guest on Late Night with David Letterman in November 1991, and even took Catherine along to make some of that homemade pizza that De Niro loves so much for Marty, Dave and another guest we all know and love.


I so dearly wish I could have found a screenshot or YouTube clip of her appearance in 1993's The Age of Innocence because it's such a touching gift to his parents. Charles Scorsese died on Aug. 22, 1993 and The Age of Innocence would end up being his last appearance in one of his son's movies. The movie itself didn't get released until Oct. 1, but the image Scorsese filmed of his parents, showing them moving slowly toward the camera in a snowy, white haze couldn't have been a lovelier image. His mother managed to appear in a character role in a scene in Casino, his next movie, and that would be her last appearance.

What a gift Catherine Cappa Scorsese and Charles Scorsese gave the world. It's the American story. They were first-generation Italian Americans, struggling to raise two sons in New York while eking out livings in the Garment District. Keeping careful watch on the one boy, an asthmatic child who couldn't go play sports as the other children could but discovered a grand universe in the movies his father took him to at a young age. Charles Scorsese's centennial doesn't occur until next year, but honestly this tribute belongs to both of them (Catherine couldn't have created Marty by herself or we would have an entirely different story on our hands). If you haven't seen it, try to watch Italianamerican. I'm not the biggest believer in otherworldly things, but I'm grateful for fate, higher powers or whatever joined Charles and Catherine together to give us the unbelievably wonderful gift of their son. 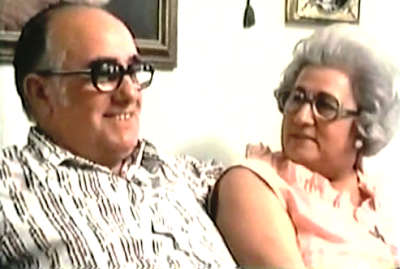 Yes, a fantastic tribute. She was a one of a kind. As you point out, it is a testimony to her on-screen charisma that in GOODFELLAS she's able to steal a scene away from De Niro and Pesci!