The bottom's a perfect place to start 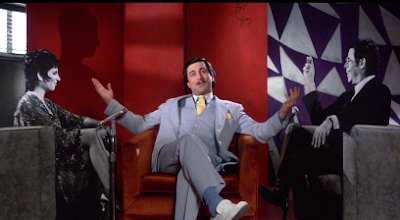 By Edward Copeland
When you think of the great De Niro-Scorsese collaborations, one immediately recalls Travis Bickle or Jake La Motta. It seems sort of appropriate that Rupert Pupkin slips through the cracks in these conversations, but he shouldn't and neither should his film, The King of Comedy, which was released 25 years ago today.

Re-visiting the film for this post, it seemed to me as if The King of Comedy serves as a bridge between the intense, psychological dramas that had given Scorsese his reputation and his next film, After Hours, among the darkest and tensest comedies ever made. De Niro's Rupert Pupkin may seem a lot less dangerous than Travis Bickle, but he is a man willing to kidnap a talk show host at gunpoint to achieve his dream of being a stand-up comic. The essentially comic bent of The King of Comedy allows you to laugh at Rupert in a way you'd never dare laugh at Travis. Still, the taxi driver and the comic wanna-be do have many similarities. 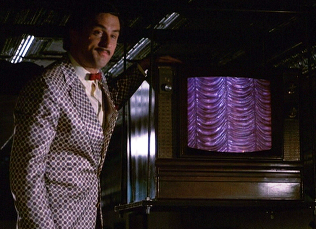 showing off his autograph collection and warning Rita not to "become a Marilyn." Both achieve positive notoriety as a result of their criminal acts, though Travis is still driving that cab while Rupert achieves his dream of success following a prison term. You can even see a little bit of a future Scorsese-De Niro psycho. When Rupert laughs maniacally during a fake talk show he's holding in his basement, there are echoes of the sounds Max Cady will emit in 1991's Cape Fear while watching Problem Child. If Pupkin had just waited a while longer, he could have been among the many weird "celebrities" our culture sprouts now without having to break the law. Aside from criminal intent, what really separates a Pupkin from a Sanjaya or William Hung? At its core, The King of Comedy, as well as the ending of Taxi Driver, are about the nature of celebrity. The crucial difference: Travis didn't have a hunger for fame while Rupert certainly does. The target of Rupert's obsession, whom he views as the key to success, is late-night talk show host Jerry Langford (Jerry Lewis). 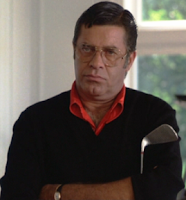 The role originally was offered to Johnny Carson, who turned it down for obvious reasons, though his real-life producer Fred DeCordova plays Langford's producer, but I don't think the film would have worked nearly as well as it does with Lewis. Lewis really has to play multiple versions of Langford: There is the on-air jokester, the man who does his best to appease fans, the complete fantasy version that Rupert imagines and the real Jerry Langford, a sheltered asshole who wishes he could avoid public contact as much as possible. Lewis excels at all of these. It's easy to see how Langford could get so tired of adulation as in one case where a woman on a N.Y. street asks for his autograph and he gladly complies. However, when she then tries to get him on the phone with a relative and he cites time constraints, she shouts that she hopes he gets cancer. There is a real level of hostility lurking beneath the admiration of many so-called fans. If Lewis ever deserved an Oscar nomination, this should have been the film that got him one. 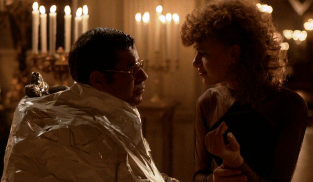 Of course, Rupert isn't the only psycho Langford has to deal with: There is also his partner in delusion, Masha (Sandra Bernhard), whose obsession with Jerry seems to be purely a warped sexual one, something she tries to indulge in when she's given the task to guard him while Rupert extorts his way on to national TV. What's particularly interesting in looking at the film again is not only a degree of prescience about the celebrity culture to come, but also other touches that would show up elsewhere. All the scenes of "The Jerry Langford Show" seem to be on video while the other scenes are on film, a technique eventually used on the late, great HBO comedy The Larry Sanders Show. 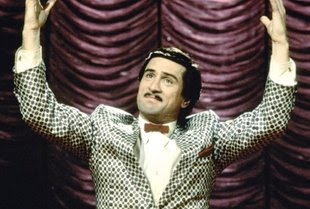 Scorsese's direction is top notch as always with many memorable shots and sequences. Watch Jerry's stage door exit, which is filmed as if it's that slow-motion footage of the Reagan assassination attempt. Then there is a scene where Rupert is doing his routine to massive laughs, leading to a long pullback revealing a wall-size photo of an audience. One thing that isn't as apparent unless you watch the deleted scene of Langford's full monologue is that his material isn't that markedly better or funnier than the jokes Rupert is eager to tell. The King of Comedy isn't a perfect Scorsese, but it is a very good one and looking at it again and thinking about After Hours, which came next, it really makes me wish that sometime Scorsese would try his hand at more purely comic material again. Certainly, nearly all of his films have ample humor (Goodfellas especially), but I'd love to see him explore that realm again.

The King Of Comedy and After Hours are two of my favorite Scorsese movies. They revel in discomfort and I still wince when I watch them.

These movies are so painful that they beg to be watched multiple times. I find the muscles ease upon each new viewing and instead I can just sit back and laugh. I'm sure that contributed to lackluster B.O. and both of these films being passed over when talking about Scorsese's career. But they are both fantastic.

And I would argue that DeNiro is more complex and loads scarier as Rupert then as Cady or Bickle. Travis and Cady were crazy from the get out but Rupert could be driven to insanity by trying to make everything go right. What started off as initially harmless could go horribly wrong. Like the parent that shakes the kid to death because the parent wants a perfectly serene environment. Jeez, that's kind of a creepy example, but you get my point.

Anyway, it's a great post and thanks for bringing light to these two great movies.