“Tired of ordinary television?” Oh, you have no idea. 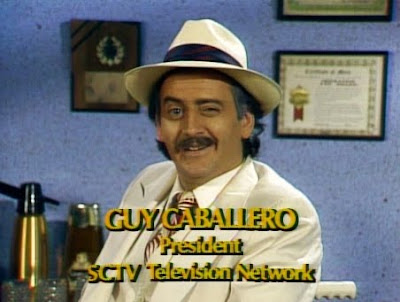 By Richard von Busack
Thirty years ago today, SCTV began broadcasting on NBC as a replacement for the Friday night music show The Midnight Special. Titled SCTV Network 90 (the 90 eventually was dropped), NBC conceived SCTV as another Saturday Night Live, just on tape and a different night. Though SCTV had comedy sketches and variety, that’s about all it had in common with SNL. SCTV Network followed the programming day of a small and strange Canadian TV network, essentially a mom-and-pop operation broadcasting in Melonville and the Tri-County area.

That loose theme allowed them to have movies of the week (elaborate, brilliant film parodies conducted on the show’s teeny budget). Just the mention of the titles is enough to make some people start laughing: Grapes of Mud, The Man Who Would Be King of the Popes, Lust for Paint, Scenes From an Idiot’s Marriage. Best remembered is the Godfather parody that cast the actual John Marley (the unfortunate owner of the racehorse in Coppola’s film) re-creating his most famous on-screen moment.

I could go on; happily the show’s run is preserved on Shout Factory!’s fine, comprehensive and expensive DVD set. Let’s also get something out of the way. Sentimental as people are about their Killer Bees and their Blues Brothers, in all categories except the all-important ratings, SCTV smoked Lorne Michaels’ much-vaunted SNL.

In Canada, SCTV had been on the air since 1976; a bare bones production rooted in the improv scene of Chicago and Toronto. For tortured financial reasons (the finances of the show went through everything but waterboarding, as Dave Thomas’ book on the show outlines), SCTV was filmed for a while in Edmonton. We can only guess how much that prairie city gave to our notion of Melonville.

SCTV shared performers with SNL, losing some talent to 30 Rockefeller Plaza (most irreplaceably Martin Short); the actors, writers and directors were lured to Hollywood. Harold Ramis was following his own successes all the way up to Ghostbusters for instance.

Certainly early 1980s SNL had its moments and it loosened up the concept of what could be done on comedy television, but I do have a grudge and I’ll air it. When I see the likes of Tina Fey — a witty performer who also is one of those endless legions of relatively normal people who consider themselves an outré weirdo…when I hear her called a comic genius, who single-handedly fractured the glass ceiling as a writer for a show that is, when all is said and done, a sitcom…and ultimately, when I compare the very best work I’ve seen Fey do with, say, Catherine O’Hara in even a middling SCTV sketch circa 1980…or when I compare Fey to the memory of the soulful Andrea Martin in leopard prints and cat’s-eye glasses as Miss Edith Prickley, snorting back a nasal laugh marinated in smoker’s phlegm…more than the usual embitterment sets in at the end of the day.

It is the women of SCTV that strike my memory most — Robin Duke was one of them and should be mentioned — but Martin and O’Hara were ultimately what one loved about SCTV first.

The lovely and talented O’Hara came close to an Oscar not too long ago for A Mighty Wind. The scarifying For Your Consideration was O’Hara’s rich payback for not being nominated. I’m planning on watching that film before every Oscar broadcast just like I watch Bad Santa before every Dec. 25.

In A Mighty Wind, O’Hara played it seriously as a lightly masked version of folk singer Sylvia Tyson. Her partner, the phenomenal Eugene Levy was mostly Ian Tyson, but also Phil Ochs in his crazier stage as well as some other shaky performers. Of course, most of our colleagues in the critical fraternity went, “Uh, are they supposed to be Sonny and Cher?”

Key to the poignancy of this film about folkie has-beens and never-weres was the real-life backing beneath the fiction. Indeed, O’Hara and Levy were performers who had worked together back in the day, who had been loved, but who hadn’t ever made the big time. In a just world, O’Hara would have been huge. In this one, she was merely one of the greatest comic actors of the last 50 years. It is O’Hara as tight-nerved and sadly overmedicated chanteuse Lola Heatherton that I think of, when thinking of the single finest moment of SCTV’s six-season run.*

In the familiar two-camera double-exposure fades used on daytime variety shows, O’Hara’s Lola has a splendid meltdown while performing a parody of Carly Simon’s hit, “That’s The Way I Always Heard It Should Be.” What was the song title? Of course: “You’re All Just Parasites Draining Me For Love.” Miss Lola, ripped to the pectoral muscles on some kind of pharmaceuticals, is in a semi-autobiographical fugue. The song is aimed like a ninja throwing star at the jittery president of the SCTV Television Network Guy Caballero (Joe Flaherty), a snazzy-looking spiv who uses a wheelchair. He doesn’t need it — it’s for respect.

O’Hara loved “cheesers” as she called them, odd ducks who’d never have a place anywhere outside of show business. Below, her performance as “Dusty Towne,” a Rusty Warren-style red hot mama hosting a completely inappropriate Christmas special. Martin, about whom there’ll be more in a moment, plays the zonked adagio dancer in the bleached fright wig.


Andrea Martin’s people were Armenian. I have the received idea (I received it from Armenians) that they are great storytellers, who prefer a method of storytelling in which parts of a story are nested in other parts…in the way a Russian grandmother doll contains doll after doll. (The Armenian who told me this said it explained Atom Egoyan’s films, particularly Family Viewing, Ararat and Adoration.) How this affects Martin’s comedy style is a matter of opinion, though SCTV was nested like that; you could follow threads, mull over backstories, glimpse the personal abysses of the characters. Martin was dark and could be either glamorous, or the old babushka on the back of the bus. She was good looking enough to be the smoldering Italian in the Fellini parody Rome: Italian Style). And she was also capable of tragedy, as suicidal pop singer Connie Franklin. She also was a superb physical comedian. There’s things Martin does in the movie that comes closest to the madness of SCTV, Harold Ramis’ 1986 Club Paradise, that are as good as anything Lucille Ball did.


“Bob and Doug were not the cleverest thing we did, by a long shot. Other characters we did were much smarter and more worthy of recognition. But Americans love dumb characters…”

That’s Dave Thomas in his book SCTV: Behind the Scenes on his partnership with Rick Moranis. Made up almost on the spot to fulfill the Canadian Broadcasting Corporation, the likable half-wits Bob and Doug McKenzie, emissaries of “The Great White North” became the mascots of SCTV. They deserve respect in a way. The two fools are essential to the growing concept of nationhood in a country where 90 percent of the people live within 100 miles of the U.S. border. The idea that Canadians say “eh?” is a result of that bit.

And if Americans like comedic saps (we still do: what are South Park’s Terrance and Phillip but descendants of Bob and Doug?) the two toque-wearing, Molson guzzling layabouts were even more popular north of the border. “I had never experienced any contact with the audience during my three years at SCTV.” That changed when he and Moranis were mobbed at the Edmonton airport by fans of “The Great White North.” The resulting fame of these two characters contributed to the jealousies and strain at the show. John Candy was gone to Hollywood, working in movies that were often beneath him; he deserves an article all his own, that comedian whose rise and early death makes him a figure you could mention with the same reverence as Fatty Arbuckle and Curly Howard.

Martin Short’s own ability to do classic Hollywood (and the most devastating impersonation of Jerry Lewis ever) served him well on Broadway and TV specials. (I, Martin Short, Go To Hollywood is the masterpiece among them). Levy and Flaherty, the utility players on the program, are as funny now as they were then.

Looking over the Shout Factory! discs, one notices that a lot of the topical references decayed with time; the barking voice of the KTEL-like salesman (Thomas, that was) hawking “Gordon Lightfoot Sings Every Song Ever Written” may seem hard to believe, but it’s strange how much of this stuff has aged well, and the fascination with old films and TV keeps them current: the divine sparkle of these performers still is remembered by a relatively few but rabid fans.

Richard von Busack is the longtime film critic for Metro Newspapers. His book The Art of Megamind was published last year.

____________________________________________________________
*WHEN SIX SEASONS AREN’T SIX YEARS
EDITOR’S NOTE: By saying SCTV ran six seasons, it requires a bit of complicated explanation, since it doesn’t equate to six years or fit the standard definition of a television season. The original Canadian television incarnation debuted as a 30 minute show 35 years ago on Sept. 21, though it did eventually make it to America in syndication. It wasn’t a weekly program at first, airing just once a month for its first six episodes. When the next batch of seven Canadian TV episodes began to air in February 1977, it was shown once every other week. When the Global Television Network, the Canadian network on which SCTV aired, ordered another 13 installments in September 1977, it finally had a weekly slot – at least until December of that year. This surreal scheduling of its first 26 episodes (produced over the course of 15 months) were considered SCTV’s first season. Its second Canadian season was more conventional, airing weekly from fall to spring 1978-79, though it lost original cast member Harold Ramis as a performer after the third episode, though he retained the title of head writer for the rest of the season. (The other original performers were Candy, Flaherty, Levy, Martin, O’Hara and Thomas).

For the 1979-80 season, SCTV didn’t air at all on Canadian television. However a deal was reached for a third Canadian season for 1980-81 without Candy, O’Hara and Ramis. As replacements, Robin Duke, Rick Moranis and Tony Rosato joined the cast. Less than two months after the third Canadian season wrapped, NBC launched SCTV Network 90. Candy and O’Hara were lured back and Duke and Rosato were given their walking papers, which actually included directions to eventual spots on SNL. NBC practiced fuzzy math as far as what counts as a season as well, calling the episodes produced between May 15, 1981 and July 16, 1982 the fourth season, so long that Martin Short joined the cast during the latter part of it as O’Hara left once again, this time joined by Moranis and Thomas. Unfortunately, NBC only gave SCTV Network one more season, its fifth, which ran from October 1982 until its final NBC episode aired on March 18, 1983.

The reason SCTV is considered to have had a sixth season has another quirky explanation. After its NBC cancellation, it moved to pay TV (Superchannel in Canada, Cinemax in the U.S.). It also was rechristened SCTV Channel and only Flaherty, Levy, Martin and Short remained, though Candy, O’Hara and Thomas did some guest appearances during the sixth and final season’s 18 episodes that ended July 17, 1984. So that’s how a show can run six seasons over nearly eight years.

Comments:
So many characters that didn't even get a mention: Bobby Bitman, Count Floyd, Johnny LaRue. The soap opera The Days of the Week with Bill Murray spoofing The Graduate in its cliffhanger ending. The musical Indira! John Candy as Divine starring in Peter Pan. Sigh...