The Forest and Through the Trees 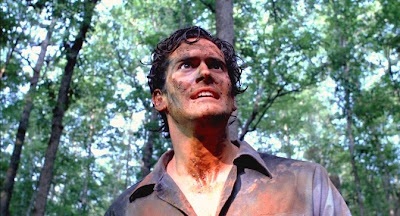 By Adam Ross
Horror movie franchises are typically based around an enduring villain (i.e. Frankenstein, Dracula, Jason Voorhees) but as The Evil Dead series gears up for another installment and celebrates the 25th anniversary of Evil Dead 2: Dead By Dawn, it's worth noting that its popularity is rooted in a constant hero. Played with career-defining conviction by Bruce Campbell, Ash has become one of the most popular modern movie heroes partly because we know he takes as much pain as he gives. When Evil Dead 2 premiered in 1987, it arrived as a sequel to a movie (The Evil Dead) which garnered only a microscopic theatrical release and, to those few who were familiar with the original, the new incarnation seemed more like a remake than a sequel. Even today it's still worth debating whether it's a true sequel or not, but it's undeniable in 2012 that Evil Dead 2 left a lasting fingerprint on the horror genre.

Six years passed between The Evil Dead and its sequel, an eternity in terms of horror follow-ups. Friday the 13th premiered in 1980, and by 1989 we already had Friday the 13th Part VIII: Jason Takes Manhattan. The Halloween franchise was readying its fifth installment by then, and the Nightmare On Elm Street series (which debuted in 1984) released No. 5 that year. While the aforementioned '80s horror standbys preyed on the audience's familiarity with their respective villains (needing only fresh victims or a new plot novelty in each iteration), the team behind The Evil Dead was banking on a returning hero with a plot that wasn't entirely original. Helped by an overly enthusiastic recommendation by author Stephen King, The Evil Dead was a modest box office hit, but thanks to its minuscule budget still turned a tidy profit. Short on budget, but not creativity, the original movie introduced the world to Ash (Bruce Campbell), who helped his friends fight off unseen evil from their isolated forest cabin. Compared to its follow-ups, The Evil Dead is more of a straightforward horror movie, with less emphasis on gross-out effects or slapstick humor. Behind the camera of The Evil Dead was the brotherly duo of Sam and Ted Raimi, along with a band of former Michigan State University students (including Campbell) with an affinity for horror movies.

The international success of The Evil Dead caught the attention of Italian film magnate Dino De Laurentiis, in particular the directing talents of Sam Raimi. Though De Laurentiis initially focused on having Raimi direct an adaptation of a King novel, the producer eventually 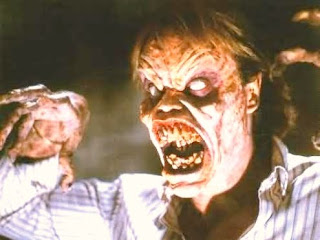 greenlit a $3.6 million budget for Raimi and his crew to start work on Evil Dead 2. Acknowledging that most audiences were not familiar with The Evil Dead, the original script called for a preface with flashbacks to the first film ala The Road Warrior. But since Evil Dead 2 would be financed and distributed by another company, the filmmakers did not have license to use footage from the original movie. This legal setback was the genesis for making Evil Dead 2 more of a reboot plotwise of The Evil Dead. This was a positive for the sequel, because the predecessor's plot was ripe with potential for Raimi and company's larger budget. Writer Scott Spiegel was a utility man of sorts on The Evil Dead, performing a number of roles behind and in front of the camera. Spiegel was well known to the Raimi brothers and Campbell from their days as young amateur filmmakers in Michigan. For Evil Dead 2, he was tapped by Sam Raimi to co-write the script with him, and he is credited with the idea for bringing a more comedic and slapstick element to the movie. Evil Dead 2 would have the same setting and basic horror elements of The Evil Dead, but would include more characters, stunts, monsters, gore, laughs and pain. 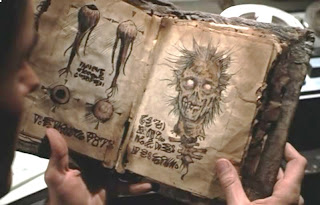 The movie starts again with Ash traveling to a remote cabin, this time with girlfriend Linda in tow. Little time is wasted before the MacGuffin from the original movie is introduced: the Necronomicon, or Book of the Dead. When Ash unwittingly plays a recording from the cabin's previous tenant (an archaeologist) reading from this cursed book, terrible forces start to attack the residence. After his girlfriend is possessed and attacks Ash, the movie briefly becomes a one-man show as our hero is attacked continually by forces ranging from the forest itself, the corpse of his girlfriend and even his own hand. The infamous scene where Ash must amputate his hand is one of the series' lasting images and illustrates the creative gulf between Team Raimi's vision of horror, and the typical slasher fare that populated theaters at the time. In freeing himself of the evil infection, Ash also painfully handicapped himself (however briefly) in a still ongoing fight against murderous forces. Before reinforcements arrive, Ash seemingly hits rock bottom when fountains of blood erupt from the walls and the house itself starts to laugh at him, but the real madness hasn't even begun.

The remaining cast is introduced when the archaeologist's daughter, Annie, and her team arrive at the cabin fresh from a dig, armed with more pages from the Necronomicon. This seemingly good news for Ash soon is spoiled when he promptly gets pummeled by one of Annie's assistants, mistaking him for a murderous lunatic (admittedly not far from the truth). This brief reprieve from paranormal punishment only lets the audience catch their breath for a moment before the intensity is again ratcheted up to new levels. This exhaustive pace is what makes Evil Dead 2 so refreshing compared to many horror movies still being poured into the same old molds. No killers lurk behind doors, no cars refuse to start — our characters barely can sit down in this tiny cabin without some new evil attacking them. 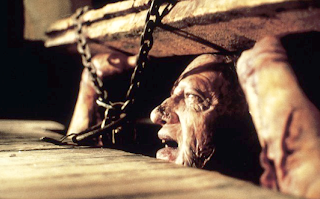 While the basis of the story was ported over from The Evil Dead, near the midpoint of Evil Dead 2 it firmly becomes its own movie, and that's when it merrily jumps off the rails. Raimi even includes a fun callback to the original movie. When Ash is locked in the basement by the new visitors and fights to escape, the action becomes a tribute to the monster in The Evil Dead, which spent many scenes vainly locked in that same room. The ridiculous climax where the forest itself starts to lay siege to the cabin, is a gleeful exercise by Raimi in one-upping every over-the-top gag you've seen so far in the movie. By the time Ash finds himself face down in the dirt in the Middle Ages, it barely even registers as a surprise after all the wild turns the movie has already made.

Even though the cast is larger than its predecessor, Evil Dead 2 undoubtedly belongs to Campbell. While he had been seen in several roles prior to this movie, it was his second turn as Ash that turned an actor with a generic name into Bruce Campbell. Playing a moving target for a myriad of possessed rednecks, invisible spirits and evil forestry, Campbell takes the action on his sharp chin again and again. Campbell famously did most of his stunts in the movie, and the actor forcibly brings you into his corner by charging again and again into the teeth of the titular enemies. The physical comedy Campbell displays would become one of the actor's trademarks: overplaying each dramatic mark with wide-eyed energy, coolly delivering his signature comeback lines and gladly sacrificing his health just to survive one more minute. 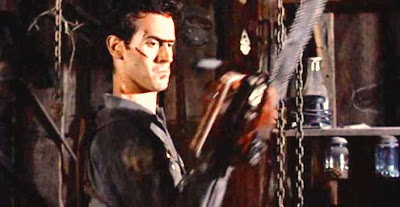 When we first see Ash, he's a normal guy with a beat-up Buick. By the end, he's not only lost his hand but he seems to have emerged stronger, aided by a newly installed chainsaw limb and the confidence from surviving an unrelenting attack from beyond the grave. When Ash raises his shotgun to lead his medieval followers, it's hard to doubt they will find victory together. Part of Ash's longevity as an action hero (he's been featured in video games, an iPhone app, comic books and various cameo appearances) has to be attributed to his rare standing as an everyman: he drives a crappy car, his idea of a vacation is a broken down cabin deep in the woods, he has some skills as a handyman, but prefers forcing the issue. Best of all, Ash doesn't run like so many horror movie characters — though it's not like he has a choice since a whole forest seems to be against him — he subscribes to the thinking that a good defense is a really good offense.

Evil Dead 2 became such a star-making turn for Campbell (and his character) that the series' third installment, Army of Darkness, relies more on the momentum and charm of Ash to carry it than simply continuing the previous movie's storyline. Compared to its predecessors, Army of Darkness is more adventure/sword and sorcery than horror, but still plows ahead with the same blunt-edged humor of Evil Dead 2. Featuring painful physicality, winking puns and Clint Eastwood-style one liners, the comedy of Evil Dead 2 and Army of Darkness has lived on in movies like Shaun of the Dead, Hellboy and, most recently, Tucker & Dale Vs. Evil. But Hollywood has yet to find another character with Ash's effortless courage in the face of terror combined with innocent charm. In most of Campbell's roles since the Evil Dead series, it's hard to tell where Ash ends and Campbell begins, or if the character is simply the actor playing it straight.

As the series marches on toward another sequel in the next couple years (with the story rumored to be another spinoff from The Evil Dead's framework), this low budget gross-out horror comedy only has increased in popularity through the decades. What did Evil Dead 2 do so right that so many of its peers could not? The best answer may be the best possible pairing of onscreen and offscreen talent. Sam Raimi has since proved his directing chops many times over with the likes of A Simple Plan, the Spider-Man trilogy and, most recently, Drag Me to Hell, and Campbell began a career as a cult action star with his performance here. When the two came together on screen with a script that pushed the envelope of typical horror conventions, the result was bloody good.

Comments:
Evil Dead 2 opened when I was in high school and Bruce Campbell was doing press for it by going to radio stations and since I already was reviewing for my high school paper and in with the firm that sent out passes, they set me up on an interview with Campbell. So Bruce Campbell was my first celebrity interview. Of course, since I was obsessed with Blood Simple and had just seen Raising Arizona, I bombarded him with Coen questions.

He used to have a house near where I went to college in Southern Oregon, and was often seen around town quite a bit (though never by me). He seems like one of the more engaging movie stars -- he does a great job answering fans' questions on Twitter.