Drag Me to Hell: the tortured home viewer's cut 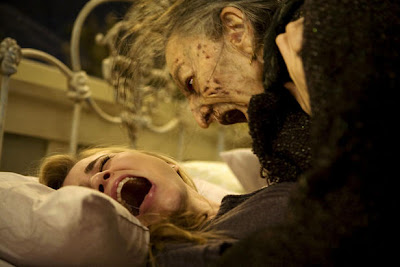 By Edward Copeland
Whenever a film hits DVD with the "director's cut," I'm always torn. Should I watch the theatrical version and write about that, since it's what people saw in the theater, or go with the unrated version. With Sam Raimi's Drag Me to Hell, I toyed with the idea (assuming I liked it) of watching the theatrical version first, which was rated PG-13, and then watch the unrated, unneutered version and compare the two. The best laid plans... Unfortunately, the first DVD that arrived kept freezing and skipping about an hour into the theatrical version. I did all the usual tricks to no avail and then assumed it was a bad disc before mailing it back for a replacement.

When the second disc arrived, the same thing happened, so I tried it out on a portable DVD player, but it didn't solve the problem. Then I noticed something on the screen where you picked between the unrated and theatrical versions: small print indicated that the theatrical version might have problems playing on some DVD players. So, I switched to approximately the same part of the story in the unrated version and finished the film. Therefore, the cut of Drag Me to Hell I saw really was one of my own invention.

Despite the technical problems and my own self-editing hodgepodge, I found Drag Me to Hell quite enjoyable. It's not campy in the way Raimi's early horror forays such as the Evil Dead series was, but Drag Me to Hell is a more straight-forward scarefest about Christine Brown, a sweet young loan officer (Alison Lohman) who makes the mistake of turning down the third mortgage extension to the wrong old gypsy and gets an awful curse placed upon her. Christine's inner, sympathetic instincts might have been to give the old woman (Lorna Raver) to pay what she owes, but her boss at the bank (David Paymer) discourages it and Christine is hoping for a promotion. Given the economic disaster our country has been facing, watching the movie, even though you know Christine doesn't deserve what she gets, you can't help but think it what fun it would have been if some of this country's foreclosure victims, tricked into subprime loans, had been well-versed in the dark arts and taken similar evil action against soulless financial institutions.

Christine does have a smart and attentive professor boyfriend (Justin Long) but she has problems beyond the gypsys's curse to contend with his snobby parents and in addition to her bank boss who still treats her as a secretary while dangling that promotion and a rival loan officer (Reggie Lee) who is after the same job and will sink to anything to steal it out from under her.

Most of the scares in the script by Raimi and his brother Ivan get to be predictable but Sam Raimi's direction moves the action along at such a swift pace that many of the frights catch you by surprise anyway. Lohman, who was so good in the underrated Matchstick Men, really has to carry the film and she does so admirably. Her transformation from sweet and well-meaning to angry, vengeful and willing to do anything to anyone and anything to rid herself of the gypsy's plague is played with great aplomb.

Drag Me to Hell won't go down in history as one of the all-time greats in the horror genre but it's certainly leagues above much of what has passed for good efforts in that field in recent years.

Whenever they give you the option of watching the theatrical cut, or original version, etc., it's bound to be lame - either badly cropped, poor sound, unrestored. They dont WANT us seeing both versions. The second version is just for "extras" leverage. Like William Castle's prints of MR SARDONICUS that were supposed to switch to an alternate ending if enough people voted to "spare" Sardonicus' life. (that ending was never even shot).