A movie about being someone not doing something 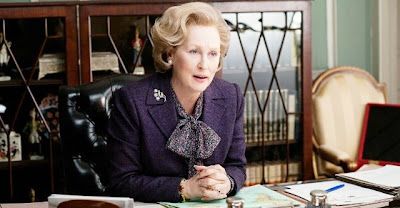 By Edward Copeland
If you're like me, it drives you nuts when the so-called cable news channels continue to call something "breaking news" hours or even days after the initial event occurred. That's why I wonder if I'm wasting space by beginning my review of The Iron Lady heaping praise on Meryl Streep's performance as Margaret Thatcher. Streep Delivers Good Performance isn't exactly a jaw-dropping revelation by now, is it? If it were someone such as Kate Capshaw or Lori Petty turning in a bravura portrayal of the former prime minister of Great Britain, that would be news (as well as a sign of the impending apocalypse). Streep's work though happens to be what's best about The Iron Lady, which otherwise does not offer much worth lauding. Since most of this post consists of brickbats, I may as well begin with something nice.

Actually, I do have something else positive to say about The Iron Lady. The Oscar-nominated makeup job that Mark Coulier and J. Roy Helland performed on Meryl Streep to make her look like Margaret Thatcher at various ages deserves the highest praise. It not only succeeds at its primary goal, but achieves this effect without betraying that it is makeup (as opposed to the horrific prosthetics that Leonardo DiCaprio and Armie Hammer suffered beneath in J. Edgar). Coulier's credits include being involved in the prosthetic makeup on all of the Harry Potter films as well as working with the prosthetics on Star Wars: Attack of the Clones and Star Wars: The Phantom Menace, where Coulier also did work with animatronics. Helland has served as Streep's makeup and hair stylist on practically every film she's made dating back to 1982's Still of the Night.

It seems appropriate that Clint Eastwood's J. Edgar should come up while discussing The Iron Lady because both exemplify the difficulty filmmakers have making biopics. Somewhere, a book must exist on writing the screenplays for movies about historical figures and chapter one must emphasize, "Find a Framing Device." Inevitably, this almost always means having the movie's subject look back at his or her life (unless it's an epic biopic and the protagonist got killed or assassinated — then the film must begin with his death as in Lawrence of Arabia or Gandhi). In both of the 2011 films about Hoover and Thatcher, the results suffer from Cliffs Notes-like summaries of the subject's greatest hits. At least in J. Edgar, despite the hideous makeup, it comes in the form of Hoover dictating memoirs to a series of agents Hoover enlists as typists, which makes that film slightly better than The Iron Lady, which chooses the controversial path of having the current Thatcher, in her 80s and suffering from Alzheimer's, going through old items and believing she's having conversations with her long-dead husband Denis (played with a complete sense of frivolity by Jim Broadbent, who behaves at times as if he's back on the set of Moulin Rouge waiting for his cue to break out into "Like a Virgin.")

If you go by the description of the film put on The Weinstein Company's official website for the movie, it's hard not to laugh since their description doesn't really match what's on the screen, but then the paragraph below that admits how telling a factual story wasn't a top priority either.


"Set in the present day, The Iron Lady finds Margaret Thatcher, now in her 80s, struggling with the confines of her simple domestic life in Chester Square, London. Haunted by visions of her deceased husband Denis, Margaret is swept away by memories of her past — both personal and political — which shaped her life and career. As Margaret traces her rise to political prominence…(she) must come to terms with a legacy that is both admired and reviled, and grapple with the great personal cost that her convictions have exacted on her supporters, her family, and, finally, herself."

Sounds like that would make for a fascinating movie. Unfortunately, The Iron Lady didn't end up being that movie. I do have to ask if there's an implication that Thatcher's convictions somehow led to her Alzheimer's. Myself, a political and history buff, I would have liked to see an exploration of Thatcher's rise to power and the nitty-gritty of her governance with more that explained why her policies drew both admiration and revulsion. Instead, we keep returning to her old-age dementia and occasionally flash back to her young days as a student (where she's played by Alexandra Roach) and the movie seems like a remake of Iris. The Iron Lady though, much like J. Edgar, lacks any sort of attitude toward its subject. Look how that same website describe the film's director's approach (and why on earth would she be the choice for the film in the first place?)


"Combining fact, fiction and poetic flights of imagination into a new breed of biopic, director Phyllida Lloyd (Mamma Mia!) creates a piercing portrait which reveals the many faces of Margaret Thatcher: the hard-nosed conservative; the woman who demolished barriers of gender and class in a male-dominated world; the spirited wife and mother who longed to change her country for the better. Exposing the private life behind the headlines, The Iron Lady is a moving journey into the heart of an extraordinary complex woman."

On the plus side, Law's "poetic flights of imagination" didn't include having Streep crawl across the roof of No. 10 Downing Street singing some appropriate cut from Pink Floyd's "Wish You Were Here" as a group of protesters appear from nowhere and begin crawling toward her. Actually, that might have improved the movie. I can't be certain this portion of The Iron Lady falls into fact, fiction or a poetic flight, but in a flashback to Thatcher (then Roberts) and her first runs for office as a Conservative seeking the strong Labour seat at Dartford in 1950 and 1951, she meets Denis Thatcher, who proposes and they wed in late 1951. After his proposal, the film shows them dancing to "Shall We Dance?" from Rodgers and Hammerstein's musical The King and I, which didn't open on Broadway until March 1951 and didn't mount a West End production until 1953. How soon the original cast recording came out and the song made its way across the ocean, I have no idea.

As if selecting Lloyd as director for her second feature film wasn't an odd enough choice, the screenwriter turns out to be Abi Morgan, co-writer of the overrated, empty-headed Shame so I suppose we should be grateful that we didn't get any scenes of Maggie in bondage gear. Actually, adding Meryl Streep as Margaret Thatcher to Shame might have helped that film — Lord knows all the characters in that film needed a stern talking to. I should say, to Morgan's credit, she also wrote the fine HBO miniseries Tsunami: The Aftermath, so she's eclectic.

Which brings us back to Streep, the best thing The Iron Lady has going for it. She looks and sounds like Margaret Thatcher, though I have to ask — is this truly a great Streep performance or an example of great Streep mimicry? The foundation upon which she must perform isn't sturdy in the least, so how deep can Streep delve into Thatcher when she's in a movie that freely admits it's mixing fact, fiction and "poetic flights of imagination" for some new kind of biopic? Does her work in The Iron Lady really equal or top her performances in Doubt, The Devil Wears Prada, Adaptation, The Bridges of Madison County? I know it doesn't come close to A Cry in the Dark, Out of Africa or Sophie's Choice.

Comments:
Yeah, I found the "modern" part of the narrative completely puzzling. What was the point? Why did the film think that such a significant portion of the movie needed to be devoted to these rather repetitive rituals? Was it simply about creating sympathy? Was it the best way they knew to show her love of her husband? Were the worried in the screenwriting phase that if they didn't have a lengthy modern phase they'd be cutting some actress out of the picture? Truly, one of the strangest biopic formats I've ever seen ... as generally conventional as it is.

I'll confess I didn't a heck of a lot about Maggie Thatcher going into this film. After seeing it, I still feel the same way. It's hard to know what to make of a film that skims over a major historical figure's actual life and legacy, jettisoning episodes of actual import to present us instead with an adorably dotty old lady puttering around with a ghost.

As for Meryl, she's great, I guess. Her taxidermy performances don't do much to inspire me, even when I can't help being impressed by the technical skill that goes into them - I know she's the world's greatest physical and vocal mimic, but do I ever forget that I'm watching Meryl Streep riffling through her usual bag of tricks? Not so much. Because we've seen them all before. For those who contend that she's different in every movie, I would venture the opposite - her mannerisms are set and relatively unvarying, no matter what she seems to be doing. And yes, I still think she's one of the most remarkably talented people in the world.

There were so many possibilities that I had listed Silkwood and was some of the 1979 triumwarate but it was late and I deleted a few and somehow Out of Africa was the stayed. I almost just left it at Cry and Sophie.