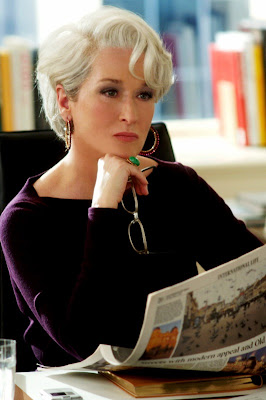 By Edward Copeland
It's been said that clothes make the man, but this year it certainly seems to be the case with many movies that performances make the film and acting most definitely gives the surge to an otherwise so-so comedy in The Devil Wears Prada, particularly a trio of turns by Meryl Streep, Emily Blunt and Stanley Tucci, that make the whole enterprise worth watching. Unfortunately, the lead role in the movie belongs to Anne Hathaway and though she can't really be blamed, her part is so colorless and her motivations so mystifying, that it's no wonder the characters who surround her are able to practically blow her off the screen.

Hathaway plays Andrea Sachs, an aspiring journalist living in New York with her aspiring chef boyfriend (Adrian Grenier, in another role whose every scene makes the viewer start tapping their feet in impatience for the interesting characters to come back). For some reason, Andy (as her friends call her) decides that a good path to writing success would be to apply for a lackey position with a viper named Miranda Priestly (Streep), who runs one of the world's top fashion magazines. Why should Andy choose this career path? Is it desperation? Has she been out of work for a long time and needs any paying gig? Beats me. Andy has no interest in being a clotheshorse or pencil-thin — until suddenly she does.

Her sudden turns in the movie seemed motivated more by the clock on the wall than anything written into the character herself and, unfortunately, Hathaway offers little by way of fleshing Andy out. Then again, what is Andy but a vehicle for meeting the real stars of the film, particularly Streep in what may be the comic highlight of her career as Miranda. She's cold, calculating and just when you think it's a one-note turn, she'll show you another layer to Miranda — but not for long.

Tucci also gets some good screen time as the magazine's long-suffering art director Nigel, who does the Extreme Makeover on Andy. The other fine performance comes from Emily Blunt as Miranda's No. 1 assistant, who tries to be as ruthless and heartless as her boss, but just can't quite cut it, even as Andy is unwittingly pulling an Eve Harrington on her.

If not for that troika of thespians, there wouldn't be much to recommend about The Devil Wears Prada, which goes on far too long for as light a vehicle as it is, but it's worth it if only to see Streep, Tucci and Blunt shine. That is all.

Comments:
The film is the cinematic equivalent of cotton candy - pink and fluffy and with no substance whatsoever - but on its own terms, I found it fairly enjoyable (although you're correct that it sags notably when the three actors you mentioned are off-sccreen).

I am normally not a big Streep fan - there are many instances in which I have found her work to be very calculated and meticulously overthought. Oddly enough, it's those precise qualities of cold pre-meditation and steely self-control that makes this devilish star turn her best performance in years - and my favorite Streep performance EVER (that's right, you heard me; yeah, she was great in A Cry in the Dark, but nowhere near as much fun). Take note of the fact that not ONCE does Streep ever raise her voice in the film - and inspires all the more reverence and terror because of it. Terrific.

Of course, we already knew that Streep could be brilliant - the great surprise of the film for me was Emily Blunt, who steals just about every scene she's in with an effortlessness that borders on criminality. I was impressed by her dramatic performance in last year's My Summer of Love, but here she proves herself to be an infinitely resourceful comedienne, with a genuine knack for mining affectation for humor.
Stanley Tucci doesn't have quite as much juicy material as Blunt does (her binge-eating hospital room meltdown alone is worth the price of admission), but is nonetheless a great assett to the film, finding an unexpected poignancy in the fact that his character is so completely at the mercy of Monster Miranda.

You make a point of saying that you consider Hathaway is the lead character around whom the story is framed, and I can't argue with that. I would, however, point to the fact that Streep is a constant presence from start to finish, and is never offscreen for any long stretch of time, as proof that she should be considered a co-lead rather than supporting. Helen Mirren and Michael Sheen share a total of about 10 minutes of screentime together in The Queen, and yet he's still a major enough presence (with enough "solo" material) for many people to consider his a lead performance - Mirren's probably in less of her film, percentage-wise, than Streep is in hers, when you look at how evenly the focus is split between her and a character she shares very little screentime with. Which way are you leaning, Copeland, where Streep is concerned?

Actually, I sort of see Hathaway-Streep the same way I saw McEvoy-Whitaker in Last King of Scotland. They are co-leads, with the first performer the main character simply because you couldn't spend that much time with Miranda and/or Idi Amin without a little bland relief.