If anyone believes these two families should not join together… 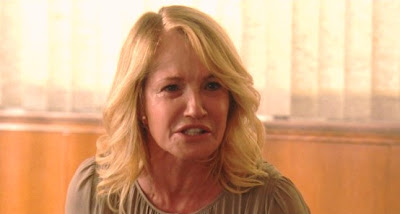 By Edward Copeland
Has a movie wedding ever gone off without a hitch? Now, some can turn out to be enjoyable messes from the old (It Happened One Night, The Philadelphia Story) to the more recent (My Best Friend's Wedding, I Love You, Man). In the past few years, even when arguably taking the form of "dark" comedy, dysfunction or worse has tended to be the main dish served at the reception ranging from the blahs of Jonathan Demme's Rachel Getting Married, the blech of Noah "Just go see your shrink" Baumbach's Margot at the Wedding and the boneheaded bombast of Lars von Trier's Melancholia. NOTE: I've purposely omitted the turd that goes by the title of Bridesmaids from either category because it belongs in a separate one called Overlong, Poorly Written Movies That Claim to Be Comedies but Wouldn't Have Any Laughs If They Didn't Cast Melissa McCarthy. All of this preamble brings us to the film I'm actually writing about in this post, Another Happy Day. Ellen Barkin produced the film and leads a strong ensemble in another tale of tensions that erupt when severed and estranged members of a large melded family must intermingle for the wedding of a shared son. What differentiates Another Happy Day from others of its ilk is that, while it's not a great film, most of the cast and the screenplay succeed at being engaging enough that the movie manages to earn laughs and rip scabs off old wounds at the same time.

It's easy to see why Barkin would help see this film get made so she could play Lynn — it's easily the best part she's had since probably This Boy's Life in 1993 (other than the just-for-kicks Ocean's 13). Barkin plays the perpetually frazzled Lynn, mother of the groom Dylan (Michael Nardelli), the oldest of her four children and one of two from her first marriage by her ex-husband Paul (Thomas Haden Church) and raised by his second wife, a real piece of work named Patty (Demi Moore).

Paul and Lynn's daughter Alice (Kate Bosworth) has been away at college, doing what she can to avoid both parents, though rumors have circulated throughout the extended family that Alice has been cutting herself. As her goofy aunts (Diana Scarwid, Siobhan Fallon) discuss it, they suspect it's some kind of new generational thing and wonder what happened to anorexia — they understood anorexia: Who doesn't want to look good?

Then again, Lynn's second brood presents a handful of its own. Her second husband Lee (a delightful, but underused Jeffrey DeMunn, who also is the best part of The Walking Dead as Dale) seems quite pleasant and at ease with the fact that their 17-year-old son Elliot (Ezra Miller, as wry and funny here as he was frightening in We Need to Talk About Kevin) just finished his second stint in rehab and can be quite rude and nasty to anyone, and their youngest son Ben (Daniel Yelsky), just beginning adolescence, who has a mild form of Asperger's syndrome and constantly videotapes most moments of their lives.

Even before Lynn and the boys arrive in Annapolis for the wedding events, Lynn is second-guessing most of her decisions in life and battling depression. She blames many of her problems on her parents, the bottled-up Doris (Ellen Burstyn), who doesn't recall depression running in her family though Lynn's grandfather did shoot himself to death, and her now-ailing father Joe (George Kennedy). Lynn feels they didn't support her during her divorce, siding with the idea that Paul should get custody of Dylan and Alice.

Another Happy Day marks the directing debut of Sam Levinson (son of Barry), who also wrote the screenplay and won the Sundance Film Festival's 2011 Waldo Salt Screenwriting Award for his script. What separates it from other recent films that tapped into this area is that Levinson manages to earn both his laughter and his pathos whereas everything, especially in Baumbach's film, just plays flat and maudlin. Levinson must be eternally grateful that he was able to assemble the cast he did, because they're key.

Barkin obviously relishes having this juicy a part for the first time in a long time, so much so that her histrionics do go overboard at times. She's at her best when she's grounded in scenes of truth with other talents such as the always brilliant Burstyn or selected scenes with Church and DeMunn. When she has to go one-on-one with Moore, things gets out of hand since Demi Moore only knows one note to play and it looks as if Barkin instinctively tries to play down to her level. Demi Moore can play "one dimensional bitch in heels" and that's it. That's pretty much how it always has been.

The two who really hold the film up are Ezra Miller and Daniel Yelsky as Lynn's younger sons, particularly Miller as Elliot. Between his work here as the constantly sarcastic addict (so much so that he keeps lifting grandpa's Fentanyl patches and licking the pain medicine off them to get high) and as the demon spawn in We Have to Talk About Kevin, this 19-year-old actor (surprise from all the other sources I checked, IMDb's birth month and year are wrong) definitely is someone to keep your eye on.

Levinson's career also will be of interest to monitor. While Another Happy Day isn't perfect, it's worlds away from something his father Barry would make, though it's interesting that the son gives Ellen Barkin her best part in more than a decade while his father gave her her first credited feature film role in his feature directing debut 30 years ago in the great Diner.