The Trier of strife 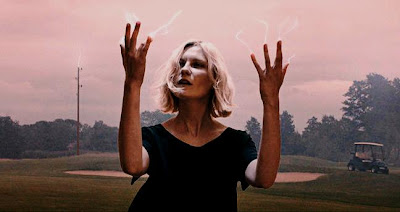 By Edward Copeland
As Lars von Trier's Melancholia opens, I thought for a moment that the DVD I was watching wasn't his movie but some sort of mashup of images merging von Trier's film, Terrence Malick's more cosmological portions of The Tree of Life and perhaps a little Return of the Jedi thrown in for good measure. (How else do you explain scenes of Kirsten Dunst cavorting beneath a dark hood and sending lightning bolts from her fingers unless it's an homage to Emperor Palpatine?) As for Lars von Trier himself, Melancholia provides more evidence that this emperor has no clothes or, at best, covers his privates with a fig leaf occasionally.

I haven't seen the complete Lars von Trier filmography. I haven't even disliked all of his films I've seen (I did like Dancer in the Dark) and someday I actually would like to watch The Kingdom. I also admit that the idea behind The Five Obstructions intrigues me, since it's not a traditional remake and Martin Scorsese plans to take part in a new version of the experiment.

Now that I've said a few nice things about von Trier, let's get to my problems with the Danish director: Must he make most things such a chore? It's miraculous Emily Watson delivered such a good performance in the teeth-gnashing Breaking the Waves. I think the course for my cinematic relationship with von Trier was set the first time I saw a work by him — Zentropa. My good friend Matt Zoller Seitz summed up that film best when he said he kept expecting Max von Sydow's voicover to start intoning, "You are getting very sleepy" because that's the overriding way Zentropa affected me. It only lacked the image of a swaying pocket watch to put me in a hypnotic trance, but not in the good way some films can but like professional tricksters do where afterward you recall absolutely nothing that transpired.

Last year, von Trier gave us Melancholia, which has been on an awards and nominations spree since the 2011 Cannes Film Festival, hailed by those who confuse piss-poor screenplays lacking the depth of '80s TV perfume commercials as profound, and believe half-baked ideas and cookie-cutter metaphors are insightful. Melancholia reaps rewards from the type of critical reviews that drive me up the wall. While it's true that all opinions about movies are subjective, so no one's positive or negative take on a film can be wrong, these types of assessments put that truism to the test. When boiled down, these write-ups scream, "I have no idea what [insert film here] is about — it must be genius." When you read between those laudatory lines, you detect the whiff of people not being truthful for fear they'll be ridiculed by the intelligentsia if they don't lionize movies such as Melancholia.

Melancholia revolves around two sisters — Justine (Kirsten Dunst) and Claire (Charlotte Gainsbourg). The film divides itself in two halves, one devoted to each sibling. Part I is titled "Justine" and details the reception being thrown for her and new husband Michael (Alexander Skarsgård) at the mansion belonging to Claire and her husband John (Kiefer Sutherland).

Many consume too much liquor and say things they shouldn't. All sorts of strangeness seems to be transpiring. Justine's boss (Stellan Skarsgård) interrupts the beginning of the reception to try to get all the guests to think of a tagline for his ad campaign. Justine keeps making excuses to disappear and notices a bright star in the sky which John, a noted astronomer, identifies as Antares — only the star eventually vanishes. John explains it's because the "rogue planet" Melancholia has passed in front of it, but he doesn't get around to explaining that to Justine until Part II so her mood just gets worse. One of the many things that amuses me about the pomposity of Melancholia stems from the notion that a new planet would be discovered by astronomers on Earth and they'd name it Melancholia. That's simply because whenever people on Earth find new planets and label them, they always give them cheery names such as Melancholia. I assume it resides in the small Woeisme galaxy that also includes the planets Anhedonia, Fullofhimself and Onemoodysonofabitch.

At least the wedding reception half of the movie includes the two most welcome presences in the film: John Hurt as Justine's sloshed father Dexter and Charlotte Rampling as her bitter, divorced mother Gaby who makes a speech about why she didn't attend the wedding because of her opposition to the institution of marriage. Her character eventually locks herself in a bathroom (perhaps hoping that no one noticed she agreed to appear in the movie) alienating hosts John and Claire because the reception's strict scheduling requires cutting the cake at a certain time. John knocks on the door and pleads with Gaby to come downstairs to view the slicing of the dessert. "When Justine took her first crap on the potty, I wasn't there. When she had her first sexual intercourse, I wasn't there. So give me a break, please, with all your fucking rituals," Gaby tells John through the door.

All of the chaos, much of which Justine causes herself, prompts the wedding planner, played by director/iconoclast Udo Kier, to declare, "She ruined my wedding! I will not look at her!" Besides being badly written, this section reminded me of two vastly superior films. Toward the beginning, the sculpted trees arranged in rows in front of the mansion brought to mind Alain Resnais' incomparable classic Last Year at Marienbad, in which I've been immersed of late in preparation for an upcoming tribute. The second, and more generalized, similarity belongs to a very good work by one of von Trier's fellow Dogme 95 practitioners, Thomas Vinterberg's 1998 film The Celebration. What happened to Vinterberg anyway?

In Part II, titled "Claire," Justine has sunk deep into depression, presumably because she assumed that she was the sole lead of the movie and now her sister has taken over. Claire, who in Part I was annoying and a bit high maintenance about the details of a wedding reception (Justine didn't even throw the bouquet fast enough for her schedule, so Claire took it from her and tossed it herself), now has become obsessed with this rogue planet Melancholia. John assures her that while Melancholia now can be seen by the naked eye, it will pass Earth safely and she needn't fear collision. Claire isn't convinced and fears for the lives of John, Justine and her son Leo (Cameron Spurr). It's an interesting coincidence that two films released in 2011 — this and Another Earth — should both have Earth-like planets appear in the sky out of nowhere, except Another Earth, with a budget of less than $200,000 and no major stars versus Melancholia's $9 million budget and well-known cast, told a better, more moving story and grossed almost exactly half what Melancholia has in the U.S.

John keeps on a brave face for his wife, but he has his concerns as well. Justine thinks that the possibility of the end of the world sounds sort of cool. The two sisters have one exchange of dialogue so ridiculous that I actually laughed out loud at it because it reminded me of the scene in Woody Allen's Love and Death between Woody's Boris and Diane Keaton's Sonja the night before he's going to fight a duel. Boris confesses his love as they discuss death and God, but somehow the talk keeps coming back to closeups of Woody rambling about the harvest and various forms of wheat. "The crops, the grains. Fields of rippling wheat. Wheat. All there is in life is wheat.…Oh, wheat! Lots of wheat! Fields of wheat. A tremendous amount of wheat!…Yellow wheat. Red wheat. Wheat with feathers. Cream of wheat."

I couldn't believe that someone actually put down the Melancholia exchange between Kirsten Dunst and Charlotte Gainsbourg in IMDb's memorable quotes section.

JUSTINE: The earth is evil. We don't need to grieve for it.
CLAIRE: What?
JUSTINE: Nobody will miss it.
CLAIRE: But where would Leo grow?
JUSTINE: All I know is, life on earth is evil.
CLAIRE: Then maybe life somewhere else.
JUSTINE: But there isn't.
CLAIRE: How do you know?
JUSTINE: Because I know things.
CLAIRE: Oh yes, you always imagined you did.
JUSTINE: I know we're alone.
CLAIRE: I don't think you know that at all.
JUSTINE: 678. The bean lottery. Nobody guessed the amount of beans in the bottle.
CLAIRE: No, that's right.
JUSTINE: But I know. 678.
CLAIRE:Well, perhaps. But what does that prove?
JUSTINE: That I know things. And when I say we're alone, we're alone. Life is only on earth, and not for long.

What differentiates the sequence in Love and Death from the one in Melancholia though (besides the humor that is) is that Allen's 1975 spoof of Russian literature actually has more significant things to say on the big philosophical issues than Melancholia does. The comedy holds deeper thoughts in its hilarious head than the emptiness of the Melancholia vacuum. Trust me: Rent Love and Death instead of this von Trier time-waster. You'll be better off.

Comments:
"The Pomposity of Melancholia" sounds like a potential title for von Trier's autobiography.

Curiously, there were two other "end of the world"-ish movies that popped up when I was looking for (mostly negative) reviews of Melancholia: Last Night, from 1998, and Another Earth, from last year.

Didn't watch either of them yet, but the three would make a interesting (or depressing, or life-affirming?) triple-feature!

I reviewed Another Earth (if you click on the link in this review it will take you to it), but it's not really an end of the world movie. What it has in common with Melancholia is that a new planet suddenly appears in the sky, but in that movie it's more of a sidenote to the main story. Another Earth isn't bad, but it's not great either. Its approach though is a several light years removed from that of Melancholia's.

Ah! Thanks for pointing out what should have been obvious. This is what I get for trying to read the blog in small bits in a small-sized window while "working" in a larger window.