Catching up with The Walking Dead 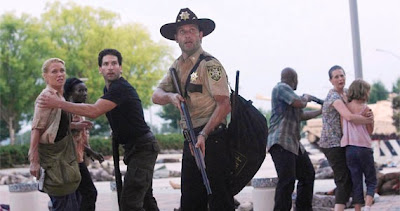 BLOGGER'S NOTE: At the end, there is an update following the conclusion of the first half of season two.
By Edward Copeland
As I've grown older, it's a rare occurrence when I start watching a new television series from the moment it premieres. There are exceptions, HBO series such as Boardwalk Empire or Treme and TNT's Men of a Certain Age to name some recent instances, but by and large I wait, usually catching up after a season or two hits DVD and then deciding if that's something I want to follow when it airs regularly. That being said, I just finished watching AMC's first season of The Walking Dead.

When I first heard about The Walking Dead, I have to admit I was skeptical despite AMC being on a roll with two of my favorite dramas Mad Men and the best drama currently on television, Breaking Bad. While I even mentioned in my review of the movie Zombieland, that those creatures seem to be the most versatile monsters around with a seemingly infinite number of ways to play them, I thought that really could apply mainly to movies or a miniseries at best, not to a continuing series.

Having now seen the six-episode first season of The Walking Dead, I must admit that I still wonder how long this series can keep going (and the double meaning of the show's title seems a bit on the nose for my taste). Admittedly, I'm going to be sketchy on plot details for others such as myself out there who haven't watched the first season yet. I never watched Lost, but I imagine they can stumble upon more groups of human survivors to prolong the battle for survival with the building of a new community and get chances for solid guest turns such as Noah Emmerich's in the first season finale, but I fear at some point it will get monotonous, especially when the credits sort of give away who might be zombie food by listing them as guest stars or outside the main credits.

Those questions about its longevity aside, the first six episodes were pretty damn good with enough turns in the story that it took you places that you didn't expect. While most of the cast is serviceable, it could use a lot more in the way of character development. When in the season finale one character decides to end their life rather than go on facing battles with the undead, it would have had a lot more resonance if the character had been developed more over the previous five episodes.

Old hand Michael Rooker's brief appearances as a racist human survivor who apparently severed his own hand to escape and still lurks out there somewhere sort of put the rest of the cast to shame. It's not that the acting is bad, it's just that the majority of the cast aren't given much of a chance so far to show how talented they are or they aren't. Lead Andrew Lincoln plays the noble former lawman, but a rather colorless one, and we get lots of types: the redneck, the wifebeater, the abused wife, the jealous brother, the overprotective sister, the resourceful young guy etc. I know we could get more juice from the talents of Jeffrey DeMunn as the pseudo-patriarch Dale and Laurie Holden as Angela if we just knew more about them.

Even with that weakness, those six episodes were compulsively watchable. Whenever AMC would rerun the series, I hated that they would do it all in one evening because I didn't want to devote six hours to it. However, when I received the two DVDs arrived in the mail, I ended up watching five of the episodes in one night, so that has to say something.

It's interesting that the series, though based on a series of graphic novels, was developed by Frank Darabont who made two of his three feature films (the great Shawshank Redemption and the cloying bore The Green Mile) from works by Stephen King since much of the time The Walking Dead reminded me of King's novel The Stand.

Until season two, I'm gonna reserve judgment. Six episodes really isn't enough for a final verdict. It usually takes about four episodes for a new series to hit its stride (and the fourth episode happened to be the first really good one, I thought). The Walking Dead needs to beef up its character development and avoid the trap of overstaying its welcome, but I can't escape the feeling that this would work much better as a miniseries than a multi-season one.

UPDATE: Since I've finished the first half of season two, most of my predictions have come to pass. They stumble on a new group of survivors. No surprise there. The resolution of the missing Sophia (Madison Lintz) did get handled well, though I suspected that was her fate. The Walking Dead continues to have the problem I complained about after season one. Except for DeMunn's Dale and, I would add Norman Reedus' Daryl, character development has been sparse, to the point that I wonder if it's not so much a lack of development as it is just bad acting. Shane certainly has changed but Jon Bernthal plays him so over-the-top, you have to think that more than Dale would have noticed.

In fact, Dale seems to be the only character allowed to notice when anyone acts screwy or might be pregnant. Is he a Jedi? Andrew Lincoln's Rick is almost literally a block of wood. The survivors they ran into led by Scott Wilson were instantly developed better by virtue of the higher level of their acting ability. Too bad Pruitt Taylor Vince had such a short run. Then again — they never found the body.

Overall, The Walking Dead has grown old on me and fast. I find myself turning it on, but being easily distracted to do something else so I always record it on the off chance I might miss something when my mind wanders. At some point, so will my channel tuner.

Comments:
Yeah, it should be interesting to see where they take the characters in the next season. Fortunately, Darabont has a wealth of issues (70+) of the comic book to draw from so I don't think they'll run out of story ideas any time soon.

I have not read the comic book this is based on, but I find the character work and writing on this show to be incredibly lacking. I agree that the show is "compulsively watchable," but I have yet to be moved or excited.

It's not like Darabont's incapable of writing this story, either. "The Mist" is a great look at characters losing it over the course of a seeming apocalypse. With Darabont canning all of the writers from the first season, it'll be interesting to see where the story goes from here.