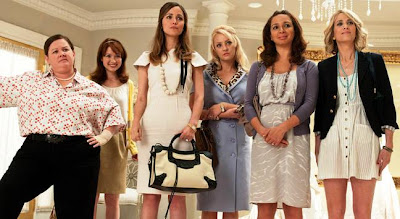 By David Gaffen
The new film Bridesmaids has been saddled with the unfortunate assignment of proving a movie centered largely around women can be funny, attract audiences across all ages and (more importantly) of both genders, and bring copious amounts of sexual and scatological humor, only this time, with girls!

The results are uneven — there are a number of huge laughs, notably in the scene where several of the bridesmaids-to-be erupt in a fit of vomit and diarrhea at a wedding dress fitting caused by food poisoning at an out-of-the-way Brazilian restaurant. (The movie takes place in Milwaukee, for some reason.)

It gets good mileage out of Kristin Wiig and Maya Rudolph, both from Saturday Night Live, as longtime friends who don't see each other as much as they used to, something that comes through after Rudolph's Lillian asks Wiig's Annie to be her maid of honor. This aspect of the story is mined well, along with some of the class resentments that seep through as Wiig grows jealous of her competition, Helen, played by Rose Byrne, who is swimming in money and isn't shy about showing it.

But what's worth considering is that this movie — which fits neatly in the group of so called "Frat Pack" movies that generally feature some combination of Will Ferrell, Seth Rogen, Paul Rudd, Jonah Hill, Adam Sandler, Vince Vaughn and a few others — is, like those movies, only partially successful and should cause us to remove the rose-colored glasses that tint our memories of the likes of Old School, Anchorman and other movies in this genre.

Judd Apatow (who produced Bridesmaids) is rightfully thought of as being at the center of a lot of these films, although his movies generally have more heart than some of the others in this group, and this movie — though over the top at times — shares some of those characteristics. It falls short of The 40-Year-Old Virgin, one of the best comedies (or movies) of the last 10 years, but slots in ahead of any of the other "Look at this wacky ensemble" movies such as Dodgeball, Wedding Crashers or Pineapple Express.

Those movies have grown in reputation over time, in part because of amusing set pieces and memorable moments. But most of the movies in this roughly 10-year time period were mediocre entertainment, enlivened by those few fantastic bits (the opening of Wedding Crashers, the climactic battle in Role Models) and weighted down with a lot of ballast — with enough juicy supporting turns to keep things interesting (Tim Meadows in Walk Hard, Jane Lynch in 40-Year-Old Virgin and, well, about everywhere else she showed up).

Which doesn't make Bridesmaids anything better or worse than this genre which it fits comfortably in. Wiig's Annie is in a bad place in life, and it keeps getting worse, and that aspect of the script is refreshing. She and the other women — particularly Melissa McCarthy, who serves the Zach Galifinakas/Stephen Root role of the hefty sidekick, but gets a few soulful moments that ground the movie — are given room to shine with gross-out material usually easily handled by men

But it has its problems. Goofy side plots, such as Wiig's British roommates, and her mother's (the late Jill Clayburgh in her final film role) penchant for attending AA meetings despite not being an addict, feel unfocused. That the movie seems on its way to making a nice chunk of change (it grossed $24 million in its first weekend, putting it on the path for about $60 million unless word of mouth pushes it further) is a testament to the pedigree of the producers involved and the marketing campaign as much as it is the script, which is good, but not great.

It's progress of a sort, one supposes — this isn't Sex and the City 2 — but it will take a few more movies in this vein before this appears to be a novelty.

Comments:
Boy, you were way too easy on this turd. Aside from Melissa McCarthy, nothing in this overlong, unfunny piece of crap works. You are right to point out how the best Apatow films (the exquisite Virgin, the lesser Knocked Up) have heart to compensate for the crassness. Somehow though, while Virgin was the exception to the rule, most of these films, including this barffest run on forever. Comedies should not run two hours or longer. I thought Wiig was awful and her script with the other woman was worse. How the WGA nominated this (and many others as well) shows that someone has been bribed. The real mystery is the nomination from the Art Directors Guild. For what? The Producers Guild nominated it as one of the 10 best films of 2011, yet for the best five episodic TV dramas, left out Breaking Bad. I think we can say with certainty now that producers have no taste. Blech.

'Barffest'? 'Turd'? 'Crap'? Surely that's a compliment for this particular movie, sir...? and I guess they had enough dough to bribe nominations not only out of the WGA but also the HFPA, the BFCA, BAFTA and AMPAS...hell, maybe they did - but that's still some pretty broad support; are we all lacking in taste if we found this film pretty funny? And is taste always required anyway? I think Wiig is wonderful and really nails that character. Granted, it's not the comedy of the decade, but if you didn't gasp with mirth in at least one scene...then I guess you'd better go find something that does make you laugh.