There is no point. That's the point. 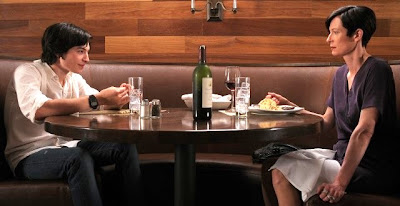 By Edward Copeland
Tilda Swinton amazes. Each year, she delivers an incredible performance in a film that, in the hands of a Harvey Weinstein or experienced studio marketing team, would most assuredly land her in the best actress Oscar field. Granted, Swinton won an Oscar in the supporting category for Michael Clayton, but she's missed the cut three years running for Julia, I Am Love and now We Need to Talk About Kevin. The big difference this year is that I believe more saw We Need to Talk About Kevin than the two previous films since Swinton won several critic awards and was nominated for both the Golden Globe and Screen Actors Guild awards. Academy voters tend to skew more conservatively and I suspect they couldn't bring themselves to mark their ballots for a performance in a film so distinctly bizarre.

Directed by Lynne Ramsay from a screenplay she and Rory Kinnear adapted from the novel by Lionel Shriver, We Need to Talk About Kevin tells, in a very disjointed fashion, the story of Eva (Swinton), an artist by trade, suburban wife and mother by choice, attempting to come to grips with her guilt over the wreckage caused by her son, Kevin. The movie isn't told in a linear direction, perhaps in an attempt to surprise the audience by dropping out-of-sequence clues like breadcrumbs left to mark a meandering path back out of the woods. However, given the title, the visuals and snippets of scenes that obviously come after the incident happened, it should be clear what kind of horror took place, if only in the abstract and not the specific. The trailer and discussion of the movie pretty well gives it away anyway, so fretting about spoilers seems pointless. However, if you don't know what occurs in We Need to Talk About Kevin, plan to see the film and suspect foreknowledge could ruin that experience, just cease reading this now.

When I described the movie's story as being told in a nonlinear way, that's a bit of an understatement. This isn't simply a film that's not told in chronological order like innumerable works throughout cinematic history such as Orson Welles' Citizen Kane or Quentin Tarantino's Pulp Fiction. For one thing, only in director Lynne Ramsay's dreams would We Need to Talk About Kevin be mentioned in the same breath as Citizen Kane or Pulp Fiction, at least as far as quality goes. Secondly, the film has been edited by Joe Bini as if all the movie's scenes had been handed over cut into single frames and then tossed in the air as if someone had asked him if he'd ever played 52 Card Pickup. We don't stay in one spot very long. It makes Baz Luhrmann's Moulin Rouge, which I once described as being made for people with the attention spans of gnats, look as if it moved at the pace of Tarkovsky's Solaris. This isn't meant to be complimentary. Bini has edited practically everything Werner Herzog has made both fictional and documentary since Little Dieter Needs to Fly, so this is not his usual style even if he did have to cut the execrable The Bad Lieutenant: Port of Call — New Orleans.

It's a shame that Ramsay chose to employ this method to tell the story because it drains We Need to Talk About Kevin of any emotional power. For that matter, it also saps the opportunity to approach the material in any of the myriad ways it hints that it might in the brief segments that will pop up occasionally such as dark satire or horror. It never slows down long enough to explore the idea that Eva's husband Franklin (John C. Reilly, who seems either terribly miscast or was directed to play his role as if he were a clueless parent in a John Hughes film) raises that Eva resented her son Kevin from birth and every time she accuses the little bastard of doing some awful thing, Franklin insists, "He's just a little boy" and buys him fancier and more expensive bow and arrow sets as he ages.

We don't get those conversations in depth though because that would require stopping the fast-forward button and watching a scene play out. It takes their young daughter losing one of her eyes "in an accident" and the 15-year-old Kevin finally showing Dad his callous side for Franklin to catch on that he and his wife should have been on eBay looking for a Dagger of Megiddo to slay their own little Damien. The movie tosses in a brief scene of humor that seems out of place where men come to Eva's door after the high school massacre selling Christianity. One asks if she knows where she's going in the afterlife. "Oh! Yes! I do as a matter of fact. I'm going straight to hell. Eternal damnation, the whole bit. Thanks for asking," Eva replies before shutting the door.

That this chopped-up mess of a movie actually produced two great performances almost makes me believe in miracles. I assume that happened because they filmed scenes whole and then just butchered them later, but they couldn't ruin the performances trapped within. Swinton, as you would expect, delivers one of the two great portrayals. The other bravura turn comes from young Ezra Miller, so good in a completely different type of role in Another Happy Day, who plays Kevin from age 15 on. I also should praise the even younger Jasper Newell, who plays Kevin from ages 6-8. He's very good as well and matches Miller well physically.

As funny as Miller was in Another Happy Day, he's frightening here, even when forced to deliver some of the kitchen sink of topics that get thrown against the wall for a few minutes. Miller gets a good speech where he blames what he did on everyone's favorite target (after violent video games) — television. Never mind that the movie shows no scenes indicating the tube exerted undue influence on Kevin. It's just required to list one of those easy scapegoat favorites: It's the "Why did the teen go mad?" equivalent of Claude Rains' Renault's order in Casablanca to "Round up the usual suspects." Now, it isn't clear if Kevin really is appearing on television or if Eva, who's sleeping on a couch, just dreams his appearance where he says:

"I mean, it's gotten so bad that half the time the people on TV, the people inside the TV, they're watching TV. And what are all these people watching? People like me. And what are all of you doing right now but watching me? You don't think they'd change the channel by now if all I did was get an A in geometry?"

It may be true, but it ain't Paddy Chayefsky. I wasn't the biggest fan of Gus Van Sant's Elephant, but it had more to say coherently about school violence in the post-Columbine era. The brief bit that touched upon the subject in the HBO miniseries Empire Falls packed a bigger punch and came as more of a surprise. Just on a purely realistic level, once we finally see the sequence where Kevin massacres many of his classmates, how in the hell would he have been able to go on that long using a bow and an arrow as his weapon? We're supposed to believe that no one in that school could have swarmed him one of the numerous times he had to load a new arrow which was every time?

The filmmakers behind We Need to Talk About Kevin undermined their film in practically every conceivable way. It's a shame because two talented performers poured their hearts into characters for a film that treated their work as little more than jigsaw puzzle pieces and obviously had no idea in their collective heads what tone they wanted, what message to convey or even if they had any ideas lurking in their skulls at all.

Comments:
I can say, without any reservations whatsoever, that there is no contemporary actress who can boast as adventurous, provocative and consistently challenging a body of work as Tilda Swinton. She's been confounding expectations for so long, it's no wonder The Academy has no idea which tidy little box to put her in. Prior to The Deep End, Hollywood didn't even know she existed - and she'd been the darling of avant garde British independent filmmakers like Derek Jarman and Sally Potter for over a decade until then. Even her mainstream work (Clayton, Narnia)is characterized by the kind of bold, unconventional choices that we're so used not to seeing - and even Streep can be pretty conventional in the way she telegraphs her emotions to the audience - that it feels as though she's doing something completely different from everyone else.

Why is she perpetually ignored by The Academy? Because none of the films you've cited are easy, prosaic, by-the-numbers Oscar vehicles with simple, straightforward narratives and the kind of easy-to-digest emotional cues than any 5 year old child could understand and latch onto. You could have made a dumbed-down, movie-of-the-week style treatment of this same subject - I'm thinking a linnear narrarive, a big, teary monologue, in which she tells us all exactly what she's thinking and feeling about her kid skewering half of his classmates William Tell style, and an uplifting ending - and I think Swinton would have gotten nominated for THAT movie. Hell, look at who IS nominated in the Best Actress category this year; these are safe, dull little Awards packages that are made for no other purpose than to win and be nominated for those silly, ugly trophies. It's not just that they don't take risks; they don't seem to understand what taking a risk actually entails. I look at crap like My Week with Marilyn, a factory-made Oscar vehicle that might have been assembled from a goddamn kit...in comparison, The King's Speech seems almost innovative...and I'm in no way surprised that Swinton was left off the shortlist. Yet again.

As for We Need to Talk About Kevin, while it benefits greatly from Swinton's remarkably unadorned performance style and uncompromising emotional honesty (if she'd been around in the 60s, Antonioni would have been nuts for her) it's a difficult movie to fully embrace. Which is probably why it's stayed with me so much longer than any of the bland, simplistic movies - the kind no one could possibly feel strongly about, one way or another - that I've seen since.