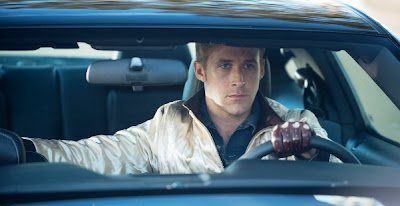 By Edward Copeland
When I reviewed The Ides of March about two-and-a-half weeks ago, what impressed me most was the re-emergence of the old Ryan Gosling, the talented actor who captured everyone's attention in the first place before his performances became lost in a torrent of tics that blanketed his characters behind a shroud of phony fog. Now I've caught up with Drive and am pleased to report that The Ides of March wasn't a one-film fluke. I wonder if this means I should give Crazy, Stupid, Love a chance.

Gosling was great in Ides and he's great in a completely different type of role in Drive. I haven't caught up with The Artist yet, but Gosling's character in Drive (known simply as the Driver) is a man of so few words, he could be from a silent film. He's a man of few words, making his living as a movie stunt driver by day, a getaway driver by night.

Driver never carries a gun and Shannon (Bryan Cranston), the crippled body shop owner who sets him up with his daytime and nighttime gigs, provides the cars Driver uses for his getaway work. Shannon also can't give up on dreams — and he's never seen someone who drives as well as Driver — so Shannon envisions him as his ticket to a successful stock car career. All that's missing is the money to fund it. There's good news and bad news on that front. The good news is that Shannon has a longtime friendship with a businessman with deep pockets. The bad news is that he's Bernie Ross (Albert Brooks), a big time mobster in the L.A. area who also has friends such as the shady Nick (Ron Perlman), who uses a pizzeria as a front for his many criminal operations and broke Shannon's body in the first place.

Bernie insists on meeting Driver first, so he gives him a demonstration of his driving skills. He impresses Bernie — not enough to give Shannon all the money he wants, but $300,000. After his display, Shannon introduces Driver to Bernie, who extends his hand. Driver just stands silent, not moving to take it. After an awkward moment or two, Driver says, "My hands are dirty." Ross smiles and replies, "So are mine" and they shake.

Driver's mysterious existence has grown more complicated on a personal level. He has taken a liking to Irene (Carey Mulligan), a woman who lives on the same floor of his apartment building, and her young son, Benicio (Kaden Leos). Driver and Irene inevitably end up involved, though soon her husband Standard (Oscar Isaac) gets released from jail and returns home. One thing that's refreshing about Drive, which was written by Hossein Amini and based on a novel by James Sallis, is that it doesn't follow the usual template where the ex-con husband is an abusive ass. Instead, upon Standard's release, he's hassled by hoods who want either his money or his criminal help.

To go much further into the details of the jagged twists that connect all the characters, would ruin much of the the movie's suspenseful fun. Director Nicolas Winding Refn doesn't let Drive sit in idle for long (if ever) from the moment it starts. Some of the violence proves to be quite shocking while Amini's screenplay comes loaded with quite a few laughs (It's also a big change of pace for the writer whose first feature credits were Jude and The Wings of the Dove).

The cast gives Drive the fuel it needs to really power this vehicle, especially from the performers going against type. Cranston already has wowed TV viewers his amazing range when he went from the loopy dad on Malcolm in the Middle to one of dramatic television's all-time acting tours de force as Walter White on Breaking Bad. Shannon allows him the opportunity to create yet another original character in the body shop owner with big dreams and worse luck.

Perlman has a knack of creating scarier roles when he's not wearing any makeup and just playing a world-class asshole such as Nico as he does here. There are a couple scenes that bounce Cranston, Perlman and Albert Brooks off each other that are just hysterical.

Which brings us to Brooks, cast against type as a smooth, intimidating criminal kingpin. When I wrote my 25th anniversary tribute to Lost in America, in describing Brooks' character David's meltdown after his wife loses their savings at roulette:


It might seem an odd comparison, but many critics always made much of the slow burn Joe Pesci can make as an actor, from calm to explosive and in at least one scene here, I'd argue that Albert Brooks is the comic equivalent of that turn-on-a-dime Pesci skill. After the Howards exit Vegas, they head out in the RV, uncertain of where to go or how to make do with a little more than $800 left to their name. Linda keeps apologizing profusely, but David stays eerily calm — until they arrive at the Hoover Dam and Linda suggests they stop and check it out. "Nice dam, huh?" David says. "Do you want to go first, or should I?" The dam doesn't burst, but boy does David, first outside and then inside the Winnebago, when Linda insists the public not watch the fight.

Interestingly enough, as great as Brooks is as Bernie Ross in Drive, that's not exactly how he chooses to play him. Brooks isn't just cast against type, but he plays him in a way that I didn't expect him to either.

The only person who disappointed me to some extent was Carey Mulligan. After her star-making turn in An Education brought her to prominence and her solid followup work in the so-so Never Let Me Go, Irene seemed an underwritten, underdeveloped role for her to take. I haven't seen what she's like in Shame yet.

Gosling though steers Drive from beginning to end. His portrayal of Driver can be downright chilling when that stillness and silence suddenly erupts. I hope Drive and The Ides of March really shows that Gosling has realigned his craft, though I do worry about that new Terrence Malick film in which he's been cast.

Comments:
Gosling is fast becoming the master of understatement. I also saw DRIVE within a very short time of seeing IDES OF MARCH and not only did I think Gosling was great in both of them, but that he was one of the subtle, restrained and enigmatic of actors I've seen in a long time. In an era where many actors go over the top, Gosling is choosing the more nuanced "less is more" approach. Keeping his emotions buried just below the surface, "having but not showing" as they say in the world of acting. He can do more with a minute of silence than most actors can with pages of dialogue.

It's more like he started than his performance in something like Blue Valentine where he drove me up a wall.

What's great about Brooks' performance is how he folds his own personality within the character: He's annoyed he has to kill people. Bernie just wants to see his name on the side of a race car - his notion of respectability - and channels his rage at the people who prevent that dream from happening. I like the Pesci comparison, although Pesci's shtick quickly devolved into self-parody. Brooks feels more volatile than ever.

Brooks was also good (and somewhat against type) as the rich fella whose house Clooney et al. rob in Out of Sight.

Drive impressed me by the way I was given certain bits of information throughout the film, such as Cranston explaining to Irene a bit of Driver's back story.

Every character seemed to have a lot of history that was only hinted at...the relationship between Perlman's and Brooks' characters and the "real" mob, for instance. (I loved Perlman's rant about being treated like a kid even though he's in his fifties because he's not Italian.)

And, of course, long before Albert made any of his own movies, he was Cybill Shepherd's campaign co-worker in Taxi Driver. I wonder when he'll get around to making another film of his own. There was such a long gap between The Muse and then the misfire of Looking for Comedy in the Muslim World. They always used to call him the West Coast Woody Allen, but he never got to his more serious films as a writer-director.