Those Brits sure can be bleak 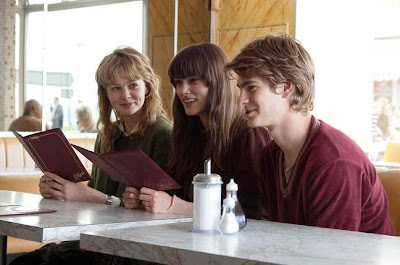 By Edward Copeland
When Never Let Me Go opened, I didn't hear much about it beyond its status as Carey Mulligan's followup to her brilliant work in An Education. It seemed to appear and vanish rather quickly and I don't recall even absorbing much of what it was about, so it surprised me when I caught up with it and realized that it was another British tale of a downbeat world, only instead of being set in the future, Never Let Me Go takes place in a parallel timeline of the final decades of the 20th century.

Never Let Me Go is based on the novel by Kazuo Ishiguro, who also wrote the novel that spawned my favorite Merchant Ivory film, The Remains of the Day, though the subject matter of the two tales couldn't be further apart. Never Let Me Go comes closer to feeling like Children of Men or Dirty Pretty Things than that exquisite tale of unrequited love. The new film also marks the first feature by director Mark Romanek since 2002's One Hour Photo.

Mulligan stars as Kathy, reared in an English boarding school with close friends Tommy and Ruth (Andrew Garfield, Keira Knightley) for the specific purpose of growing up to become organ donors. Titles near the beginning of the film inform us that the average life expectancy reached 100 in 1967, due presumably to this program.

Of course, kids will be kids (or is that clones will be clones?) and they do have feelings and romances and longings develop alongside dreams of avoiding "completion," i.e. giving all that they can before their bodies are tossed aside like so much garbage.

Mulligan centers the film as well as she can, but it's a depressing slog. Garfield comes off even better. He had a helluva 2010 — in this film, The Social Network and the 1974 installment of the Red Riding Trilogy, even though I couldn't make it through all of that crime procedural series, finding it slow and overrated.

For me the real surprise is Knightley. Did you know she is able to act when not wearing a corset? Actually, in all seriousness, though she has been good in some of her seemingly endless run of period pieces, I think this is the best performance she's given. Her Ruth really gets the most development of the three central characters and it gives Knightley a chance to show sides she never has before. It's just a shame it's not in a better movie.

Never Let Me Go also contains the always welcome presence of Charlotte Rampling who provides some good moments as the headmistress of the boarding school, especially in the film's anticlimactic denouement.

I wasn't a big fan of One Hour Photo and Romanek has been busy with music videos since, according to IMDb, but there's not much movement to be found in Never Let Me Go. It's established fairly early what the plot is, so no mystery drives the film and the would-be triangle doesn't go anywhere either. The movie just sort of lies there, asking you to be forlorn about a story that's established early in the running time.

With the rush to catch up with 2010 films, Never Let Me Go seems foreordained to be one that in a few months I'll have forgotten that I even watched.