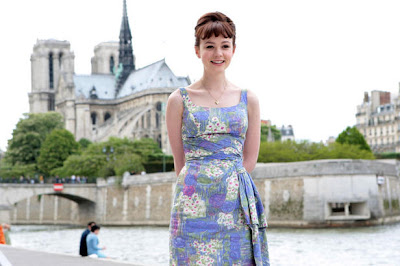 By Edward Copeland
You can never really claim that a year in movies has an overriding theme, but if you could, 2009's would be that so many of the better films were dependent on a single performance that almost single-handedly raised his or her film to a higher plane. You saw it with Jeff Bridges in Crazy Heart to Sam Rockwell in Moon and Tilda Swinton in Julia. This is most decidedly the case with An Education, which would probably be a fine film anyway but becomes an even better one with Carey Mulligan as its lead.

Mulligan stars as Jenny, a bright 16-year-old attending an all-girls school in the London suburbs in 1961 in presumed preparation for her eventual enrollment at Oxford. She's smart, funny and talented and can't help but show it, even if it means often offending those around her, including teachers such as Miss Stubbs (Olivia Williams, unrecognizable from those who only know her from Rushmore) and her stuck-in-the-mud father (Alfred Molina). As many smart teens can be, Jenny thinks she knows a lot more than she really does and, unfortunately, she suffers for it in the end.

One day, while walking home from concert rehearsal with her cello in a driving rainstorm, a handsome thirtysomething stranger named David (Peter Saarsgard) charms Jenny into his car and before long, despite the age difference, the two are dating, despite Jenny's insistence that she's hanging on to her virginity until she turns 17.

Jenny's classmates find it quite chic that she's seeing an older man while her teacher and especially the school's stern headmistress (the always reliable Emma Thompson) give her strong warnings, some threatening her future at the school. Her parents (Molina and Cara Seymour) would probably be similarly suspicious, but David manages to seduce them at a faster rate than he does Jenny. The sometimes veiled (and sometimes not-so-veiled) anti-Semitism doesn't even seem to factor in even though David is Jewish.

Before long, her parents are allowing Jenny to go on overnight trips with David and even a journey to Paris, all under the assumption that David's "aunt" will be along as a chaperon. David and Jenny's clubbing and traveling companions are usually Danny and Helen (Dominic Cooper and Rosamund Pike) and some of their actions, as well as David's, should clue Jenny in to the idea that her boyfriend might not be all that he claims to be, but the heart of a first love has a terrible defect that allows for the masking of a significant other's defects.

Everything hits the fan soon after David takes the big leap and proposes marriage to Jenny, who is torn since her whole life had been geared toward continuing her education at Oxford. Her father, who'd supported the idea her entire life, is quick to abandon it for a good marriage because, really, what career can she expect to have? Even Thompson's headmistress tells her there are more opportunities than just teaching for young women now: There's also the civil service.

The sparse, deliberate and well-written screenplay by Nick Hornby was adapted from the memoir by Lynn Barber and smoothly directed by Lone Scherfig. The performers all do well, especially Molina and Williams. Sarsgaard's British accent isn't even half bad. If the film has a weakness, its final scenes seem rushed to try to tack on somewhat of an unnecessary happy ending that seems out of place with what went before.

However, as far as Mulligan goes, a star is born. She is so beguiling that the overwhelming number of comparisons of her to Audrey Hepburn certainly seem earned. While you are watching Mulligan in An Education (and I don't recall any scene she's not in), you can't take your eyes off her. It's not often that you see a performance from a relative newcomer that immediately makes you anxious to see what she does next. Carey Mulligan is an actress to watch.