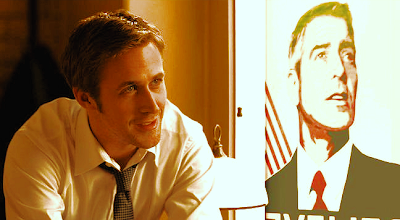 By Edward Copeland
After watching Ryan Gosling transform himself into one bundle of tics after another in torturous dramas such as Blue Valentine and lame attempts at quirky comedy such as Lars and the Real Girl, what a tremendous relief to see Gosling once again deliver a great, relaxed performance and do it in the best American political drama in years.

The Ides of March marks George Clooney's fourth time in the director's chair (Leatherheads slipped my mind and I never saw it). Clooney, as he did in the superior Good Night, and Good Luck., also takes a supporting role and co-wrote the screenplay with Grant Heslov. Beau Willmon, who wrote the play Farragut North, upon which The Ides of March is based, also contributed to the movie's script.

Gosling stars as Stephen Meyers, an idealistic 30-year-old campaign adviser to Gov. Mike Morris (Clooney) who is closing in on the Democratic presidential nomination. Stephen shows real talent for what he does, but he's still young enough that he'll only work for politicians in whom he really believes. Meyers hasn't worked in the game long enough to develop a pragmatic, cynical shell like Morris' campaign director Paul Zara (Philip Seymour Hoffman) or Tom Duffy (Paul Giamatti), the man running Morris' last real rival for the nomination, Sen. Pullman, ahead of the crucial Ohio primary.

Someone says to Stephen at one point something similar to a moment from the great fourth season of the HBO series The Wire. The chief of staff for Baltimore's recently defeated mayor has a drink with the campaign adviser of the man who won the office as they watch him go back on a pledge on the bar's TV. The ex-chief of staff tells the adviser, "They always disappoint you in the end."

For those who haven't seen The Ides of March yet, I'll let you learn on your own in what way Clooney's seemingly perfect candidate doesn't live up to Stephen's standards and what choices he makes as a result, though other twists complicate Stephen's decision.

I haven't had the chance to see Drive yet, but this film demonstrates a return to form by Gosling, who I feared would be lost forever in a realm that confused mechanized existential angst with actual acting. Gosling produces some terrific moments of perfect stillness where he doesn't even need dialogue to convey Stephen's thoughts as opposed to Blue Valentine where you wanted to strap his limbs to a table so he'd stop being so fidgety.

Of the four jobs that Clooney performs on The Ides of March, his efficient direction with some interesting shots (including a great closing one) probably ranks on top. He's good as the governor, but it's the type of role he can do in his sleep.

The rest of the cast performs as well as you'd expect them to do. In fact, Hoffman and Giamatti could have swapped roles and the movie wouldn't have skipped a beat. Both actors play these types so often and brilliantly, it isn't as if either will spring surprises. Marisa Tomei gets some nice moments as a New York Times reporter. Evan Rachel Wood fits nicely as an intern on the campaign whose father happens to chair the DNC. Jeffrey Wright doesn't get enough to do as an ambitious senator dangling his delegates in front of both contenders and Jennifer Ehle gets completely wasted as the governor's wife.

The Ides of March belongs to Gosling, Clooney's direction and the screenplay in the end. We've had many good political satires in recent memory, but I can't recall the last time someone produced a good political drama as a feature. The Adjustment Bureau was good, but it had that Philip K. Dick element that took it out of the realm of the realistic, so I don't think it counts. The best recent one might have been about Italian politics, Il divo.

The Ides of March doesn't quite rise to the level of the greatest political dramas or thrillers such as The Candidate, the original Manchurian Candidate or The Last Hurrah, but it's the best in quite some time. If The Ides of March has no other legacy, at least it has returned Ryan Gosling to a career in acting,

Comments:
Totally agree, Ed. I pretty much had the exact same reaction you did. Gosling is great here (as he was in Crazy. Stupid. Love. and Drive. By the end of The Ides of March, I felt like I had watched a really well-written piece of episodic television and nothing more. There's not a ton of political bite to the film; it just kind of sits there and efficiently chugs along until its conclusion (which ended on the perfect shot, by the way).

I thought it was a little better than that, but I'm with you on that closing shot. Hopefully I'll see Drive in a couple weeks. Is Crazy, Stupid, Love worth it?

The opening is really good...but then the film kind of falls apart after about 30 minutes. Still, the performances by Carrel, Gosling, Julianne Moore, and Emma Stone are well worth whatever flaws the last act of the film has.