The bleak shall inherit the earth 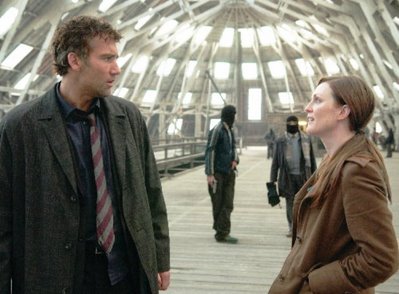 By Edward Copeland
The initial scene of Children of Men jars the viewer with its puzzling premise. Clive Owen is gathered with others around a TV set announcing the death of "the world's youngest person." Not knowing anything about the film's premise, I was intrigued — even more so when the broadcast adds that the deceased was shot for refusing to sign an autograph and was 18 years old. Then, the film gives away its game: The setting is London in 2027 and various unnamed cataclysms have made the entire planet infertile and the person killed was the last human to be born — in 2009.

Soon, the moviegoer gets shaken up again as Owen's character barely misses being in the wrong place when a huge explosion occurs. 2027 in London doesn't look like a place you'd want to visit, let alone live in by choice. The government has turned totalitarian, partially in response to a huge influx of immigrants it can't deal with and "terrorists" take all sorts of actions to try to restore normalcy.

The main issue remains the same for everyone though: For the first time, earth is facing absolutely no population growth. The fascinating premise of Alfonso Cuaron's film, based on the novel by P.D. James, manages to hold your interest, even though the movie itself fails to satisfy as a whole. Owen plays Theo, a man whose role in the various events seems unclear, especially when he's abducted by a Julian Taylor (Julianne Moore), who turns out to be a former lover and fellow activist with whom he once shared a child before the world went barren.

Soon, Theo finds himself responsible for the safety of a young woman named Kee (Claire-Hope Ashitey), who somehow has found herself pregnant and is viewed as a sign of hope and leverage by all sides in the battle.

The technical aspects of Children of Men are superb and it does contain a fun performance from Michael Caine as a hippie-like ex-political cartoonist. Despite such a thought-provoking premise, much of the movie proves confused and drags in far too many spots to truly make the experience worthwhile. When you set up a story this intrinsically interesting, I think a bit of closure or guessing at what comes next isn't too much to expect. It's a misfire, but an interesting one.

Comments:
Do you mean you didn't like the ending because you found it inconclusive? It's a bit hard for me to tell, from the briefness of this piece, just what you felt was flawed or lacking...I agree that the film doesn't 'join all the dots', but does it need to? I was left thoroughly satisfied and impressed by the film's end, and never felt any slow spots along the way, nor felt that the film was complex enough to be confusing, even if some elements were left ambiguous or unexplained. It was actually one of the more gut-wrenching and breathless experiences I've EVER had at the movies, and I hope that my second viewing (when I get around to it) is just as good!

By the way, I overheard one half of a couple sitting close to me in the cinema expressing at the end of the screening what sounded like the same type (and level) of dissatisfaction that you came away with (i.e. "So...did he die? Did she and the baby get saved?") I guess that means you're not alone in your opinion.

I'll be honest. I see so many films for the first time each year that it's a little hard to retain perfect memories of what happened in them years after I saw them, especially if I thought they were a mixed bag or bad. I had to re-read my review, but I imagine that probably had something to do with what you mention but all I could specifically remember that wasn't in the review was when Julianne Moore got killed in a car. Again, I stand by the idea that if you set up that interesting a premise, you should have more than just a vague payoff. Sort of the same problem that afflicted last year's Never Let Me Go, though that film did explain itself better at the end it was just more of a muddle in the middle.