”As a composer I might class myself as a Neo-Romantic, inasmuch as I have always regarded music as a highly personal and emotional form of expression. I like to write music which takes its inspiration from poetry, art and nature. I do not care for purely decorative music. Although I am in sympathy with modern idioms, I abhor music which attempts nothing more than the illustration of a stylistic fad. And in using modern techniques, I have tried at all times to subjugate them to a larger idea or a grander human feeling.”
Bernard Herrmann in Bernard Herrmann: Hollywood’s Music-Dramatist by Edward Johnson

By Edward Copeland
Our centennial tributes tend to be of actor, actresses, directors and writers. We were honored when lyricist Bill Russell wrote a tribute to composer Frank Loesser, but he was a songwriter, providing both music and lyrics, who penned many memorable songs for stage and screen. We've never attempted to salute a composer known for his instrumental scores, particularly ones he wrote for movies, but Bernard Herrmann born 100 years ago today (exactly one year younger than Loesser), didn't like to be pigeonholed as a film composer since his musical work spanned opera, symphonies, concerts, radio and television in addition to some of the most memorable film scores of all time. That's why instead of just starting this post with a photo of the man and some words, I figured it's more fitting to use clips or links to clips to demonstrate his works such as his score that accompanied the Saul Bass title sequence for Alfred Hitchcock's Vertigo, an example of one of his very best. Movie titles and still photographs don't do Bernard Herrmann justice, that's why I'm going to write less than usual in this tribute and let his music do the talking. However, the man was so prolific, I've had to divide the post in half so it doesn't grow so long anyway that it knocks other posts off the front page. While there will be some biography, mainly it will be about his music and I'm going to try to be chronological and, in a couple of occasions, show his influence. We even have a clip of the master musician discussing his craft relating to his scoring to a particular film. If you are reading this at work, I hope you have headphones. 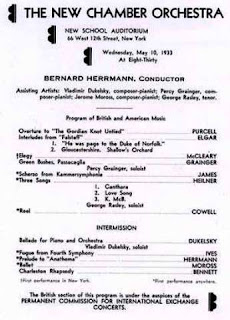 His father encouraged his interest in music and he took up the violin, winning a $100 prize for one of his own compositions at the age of 13. Herrmann's interest in composition became more serious sometime around 1927 while he attended DeWitt Clinton High School and studied with Gustav Heine. His first notable work is considered to be a tone poem called "The Forest" he wrote in January 1929. He enrolled at New York University (while still in high school) and studied composition with Philip James and conducting with Albert Stoessel. Stoessel later headed the opera and orchestra at Juilliard and Herrmann landed a fellowship there in 1930 where he studied conducting and composition with Bernard Wagenaar. He officially finished high school in 1931 around the time he formed his own orchestra, The New York Chamber Orchestra. This was before he was 20. He left Juilliard in 1932 but without a degree. That fall, he attended lectures in advanced composition and orchestration at NYU by Percy Grainger. Herrmann also worked as a music editor and arranger at the Harms music publishing company around this period. That same fall, some dancers he knew from Juilliard asked him to arrange ballet music for a musical revue called +New Americana, which inadvertently led to his professional composing, conducting, and Broadway debuts when he went on to direct the orchestra during his arrangement of The Shakers and his own piece, "Amour à la Militaire," when it opened Oct. 5, 1932. It ran 77 performances.*

By 1934, he was a staff conductor with CBS radio. He seriously began his prolific composing work during this period, writing many scores to accompany CBS radio programs including "The City of Brass" which accompanied David Ross' narration of one of the tales from One Thousand and One Nights or The Arabian Nights. In 1935, he composed the orchestral piece the Currier and Ives Suite. It was described as a short, five-movement piece on the Film Score website which has been running a series all year on Herrmann's centennial. The site notes that its composition occurred while he was employed by CBS because one of the pages of the composition was on CBS paper. Other than that, it says the origin of the piece is largely a mystery. There is a YouTube clip set against classic Currier and Ives drawings that has the orchestral piece.


Herrmann was named chief conductor of the CBS Symphony Orchestra in 1943 (a title he held until the orchestra disbanded in 1951 as TV began to displace radio), where it was said he introduced American audiences to more new musical works than any conductor in history. He particularly championed the American composer Charles Ives. Even before getting that post, Herrmann's output beyond the network and for mediums other than radio or orchestra bloomed. During the 1937-38 period, Herrmann got his feet wet for the first time in composing opera with a 45-minute cantata of Moby Dick. It didn't receive a world premiere until 1940 with The New York Philharmonic under the direction of Sir John Barbirolli. The cantata had never received a live performance in the United States since until April of this year when John Kendall Bailey conducted a 40-voice men's chorus and four soloists to perform it with the American Philharmonic-Sonoma County. Below are excerpts from the score, though it doesn't indicate from what recording it is taken and though it includes stills from John Huston's film of Moby Dick, note that Herrmann did not score that film. 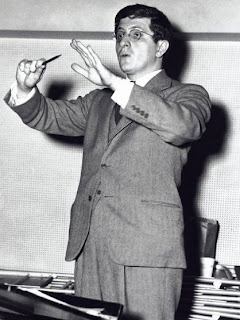 While still just a staff conductor at CBS, the musical prodigy Herrmann would meet another young wunderkind making waves in New York named Orson Welles. He composed and arranged scores for Welles' Mercury Theater broadcasts, including the infamous 1938 War of the Worlds . While working at CBS, Welles lured Herrmann to Hollywood with him and when Welles made his astounding debut as the actor, writer and director of Citizen Kane in 1941, Herrmann had an equally impressive first year as a film composer. Not only did he make an impressive first showing with Citizen Kane and Welles' 1942 followup The Magnificent Ambersons, in between he composed the score for director William Dieterle's 1941 film The Devil and Daniel Webster aka All That Money Can Buy. In 1941, both the scores for Kane and Daniel Webster earned Herrmann Oscar nominations. His Daniel Webster score won (and there were 20 nominees). Though some of his greatest work still was to come, many for Hitchcock. He would receive another nomination in 1946 for director John Cromwell's Anna and the King of Siam but would not receive another nomination until he received two posthumous nominations in 1976. As is unfortunately the case with many YouTube clips, the embedding has been disabled, click here and listen to his lovely piece as the reporter reads Thatcher's diary leading into the flashback to Kane's childhood. Also, two pieces from Ambersons: Herrmann's subtle score running beneath Welles' narration of George's comeuppance and a much bouncier, holiday-theme Herrmann piece accompanying the snowride scene. I couldn't find a sample for The Devil and Daniel Webster/All That Money Can Buy.

In 1943, Herrmann composed the score for Jane Eyre directed by Robert Stevenson but involving many Mercury Theater players including Welles starring as Rochester, Agnes Moorehead as Mrs. Reed and John Houseman co-writing the script. Joan Fontaine starred in the title role. This is Herrmann's main title theme. He didn't score another film for two years when he did director John Brahm's 1945 psychological thriller Hangover Square, which I've never seen but certainly sounds interesting. It stars Laird Cregar as a composer suffering lapses in his memory who thinks he may have killed someone and seeks help from his doctor (George Sanders). Even though the composer is engaged, he somehow finds himself involved with a music hall dancer (Linda Darnell) and his temporary memory losses are threatening the concerto he has a deadline to finish. The following year, he composed the score for Anna and King of Siam, which earned him that third Oscar nomination.


In 1947, Herrmann penned the score for The Ghost and Mrs. Muir directed by Joseph L. Mankiewicz, a film that's very popular on YouTube, only for some reason people like to use scenes and stills from the movie and place modern songs over them. The next year, Herrmann made his first foray into composing for television, making music for many installments of Studio One which went by about a half-dozen different titles during its run. That kept him busy until 1951 when he debuted his first full-fledged opera Wuthering Heights. In the clip below, Yves Saelens sings "Now art thou dear, my golden June" (Edgar Linton's aria) in a concert performance of the opera at the Festival de Radio France et Montpellier 2010. Alain Altinoglu conducts the Orchestre National de Montpellier.

The Day the Earth Stood Still (1951)
Directed by Robert Wise; Piece: Prelude/Outer Space/Radar
On Dangerous Ground (1952)
Directed by Nicholas Ray (Ida Lupino uncredited)
The Snows of Kiliminjaro (1952)
Directed by Henry King (Roy Ward Baker uncredited)
White Witch Doctor (1953) directed by Henry Hathaway
Now, I'm not going to list EVERY film or television show Herrmann scored, because it would grow too long. It's still going to be so long, that's why I've had to divide it into two posts so everything doesn't get knocked off the page. I'm tempted to leave out lesser titles or even bigger names if there isn't a music sample I can't find. Sometimes though, I'll find some other compelling reason to include a title figure anyone can click on his credits themselves.


The Egyptian (1954) directed by Michael Curtiz
Shower of Stars TV series (1954) Episode: "A Christmas Carol"
In 1955 when Burt Lancaster directed the first of the only two films he ever would helm, The Kentuckian, and he chose Herrmann for the score. Of course, that year was auspicious for another reason: It marked the first teaming of one of the most important director-composer partnerships in film history: Herrmann and Alfred Hitchcock. What brought The Master of Suspense and Herrmann together for the first time actually wasn't one of Hitchcock's tense masterpieces but his dark comedy The Trouble With Harry about the small Vermont town with the problem of a body that just won't stay put. It also marked the film debut of Shirley MacLaine.


The Man in the Gray Flannel Suit (1956)
Directed by Nunnally Johnson; Pieces: Prelude, The Children's Hour
So this is where we will leave part I. Click here just in case Part II still doesn't show on the main page.

*Much of the information in this section comes from the Herrmann biography found on Artists Direct.

Comments:
Proving that it is possible to learn something new everyday, I wasn't aware that Herrmann had scored episodes of The Lineup, aka San Francisco Beat. Great to know.

And if I still had my purchased DVD copy of Hangover Square, Ed, I'd loan it to you in a heartbeat. (I do have a copy recorded off TCM, but I'd need provisions and sherpas to find the darn thing around here.)

He did lots of TV shows, but I didn't have samples for them. Pursuit, For Better or Worse, The Americans, Gunsmoke, The Great Adventure, 7 Twilight Zone episodes, 17 Alfred Hitchcock Hour episodes, Convoy, Rawhide, Cimarron Strip, 3 other Virginian episodes and countless numbers of the various theater shows.