From the Vault: Citizen Kane 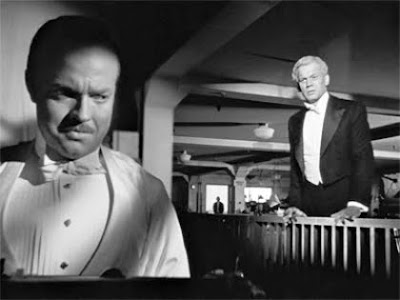 Where does one begin writing about a film like Citizen Kane when so many words have been written about the film over the past 50 years that it seems every possible angle has been explored? Approaching the film with emphasis on its importance and what makes it a landmark probably serves Citizen Kane best on the occasion of its 50th anniversary re-release.

While Orson Welles' masterpiece, so routinely hailed as the greatest motion picture ever made that the phrase seems knee-jerk, shows regularly on TV, nothing equals the cinematic experience, especially when it highlights the brilliant deep focus cinematography of Gregg Toland.

"Memory is the greatest curse ever inflicted on mankind," drama critic Jed Leland (Joseph Cotten) says at one point in the film and this line in many ways reflects what made this movie such a breakthrough. Citizen Kane explores a sort of existential mystery, attempting to encapsulate one man's life by deciphering the meaning of his dying word. Welles proved a wonder in his film debut, playing the title character, producing, directing and co-writing the movie — all at the tender age of 25.

Charles Foster Kane so closely resembled the newspaper magnate William Randolph Hearst that Hearst practically curtailed the film's release in his lifetime. Like Hearst, Kane inherits a fortune, not from a wealthy father but from a supposedly worthless deed left to his mother (Agnes Moorehead) by one of the tenants of her boarding house. A guardian whisks young Kane away to the city, away from his loving mother, and into a lifelong search to replace that absent love. "If I hadn't been rich, I might have been a really great man," Kane says at one of the worst moments of his life and one of the film's greatest contributions comes from its unpredictable narrative structure that explores this.

Kane leaps back and forth in time as a reporter (William Alland) searches through newsreels, diaries and interviews with friends, enemies, ex-wives and employees to try to pin down the secret of Charles Foster Kane. The film's conception remains fresh today as it examines the life of a man who thought "it would be fun to run a newspaper."

This film's legacy extends far beyond its story into the now-commonplace techniques it employs, from the structure which you can spot in films such as Annie Hall to individual shots like the unbroken pan through a rain-soaked skylight that Brian De Palma aped in the dreadful Bonfire of the Vanities. Even TV got into the act when St. Elsewhere ended with a scene reminiscent of the film's opening sequence.

Then there are the touches that can't be equaled such as the series of scenes at a dining room table that reflect in short order the disintegration of a marriage. All told, this is a film that not only has stood the test of time but demands repeat viewings. If you call yourself a movie fan and have not seen this film, your education is incomplete. Don't miss this chance.