Truth be told, you two are both dragging me down

By Edward Copeland
By the time I finally found myself in a position to watch Shame, my expectations rested on two separate planes. The first, for the film itself, had settled on not anticipating being wowed, based not only on what I'd heard but also because (I must admit) I never managed to make it all the way through director Steve McQueen's first film, Hunger. The other plane existed on a much higher level, formed solely on what I'd witnessed of Michael Fassbender in 2011, giving great performances in movies that couldn't be more different — X-Men: First Class and Jane Eyre. I haven't even had a chance to catch him as Carl Jung in David Cronenberg's A Dangerous Method. However, I've witnessed many an actor or actress rise above mediocre material and I expected that if Shame turned out to be a subpar film, Fassbender still could deliver a superb performance. Unfortunately, thespians can do only so much with scripts as aimless, pointless and devoid of meaning as Shame. While Fassbender lets it all hang out in service to this lackluster screenplay, Carey Mulligan delivers the film's best performance, far better than Shame deserves, as Fassbender's character's sister.

Based on the portrait painted in Shame, it seems that nearly all currently living in New York — including the women — carry attitudes toward sex that's more likely to be found in 14-year-old boys, only real 14-year-olds aren't getting laid at this high a percentage and the teens probably display more maturity and hold fewer fears of long-lasting relationships. Yes, I understand that Brandon is a sex addict, but the screenplay by director McQueen and Abi Morgan may depict the life of a sex addict but it never deals with the subject of sex addiction. Imagine a film about a heroin addict and the entire movie consists of the addict shooting up or snorting the drug, showing little in the way of consequence and no discussion of the addiction before the film finishes. That's almost what Shame amounts to as a film. Hell, the TV sitcom Cheers treated sex addiction more seriously and with laughs when in a later season Sam sought treatment for it. 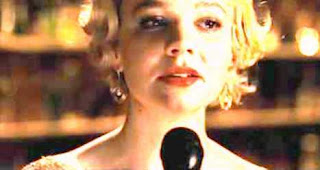 The film's complication, i.e. Brandon's complication, stems from the arrival of his estranged younger sister, Sissy (Mulligan), who crashes at Brandon's apartment because she and her boyfriend are on the outs. Her arrival, according to the production notes and a couple of dialogue scenes inserted to break up the monotony of Brandon's boffing, throws his world into "chaos." As near as I can tell from the movie, chaos for Brandon (as well as McQueen and Morgan) equals having Sissy living in his apartment meaning he must go elsewhere to fuck. Poor baby. What also upsets Brandon is that Sissy gets a booking to sing at a New York club, which Brandon's boss David hears about, forcing Brandon to reluctantly accompany Fisher to see her show. The scene actually ends up being one of the film's few highlights as Mulligan performs the most downbeat version of Kander & Ebb's "New York, New York" you'll ever hear. It's reminiscent of the scene in Georgia when Jennifer Jason Leigh performs Elvis Costello's "Almost Blue." It certainly bears no resemblance to Liza Minnelli's version in Martin Scorsese's film of the same name that introduced the song or Sinatra's recording that immortalized it. Rubbing salt in Brandon's wound about Sissy interfering in his nightlife and his apartment, she and David end up going back to Brandon's place and having loud, boisterous sex, forcing a pissy Brandon to leave.

While visually, cinematographer Sean Bobbitt provides a cool blue tint that comes across as wholly appropriate to the film, Shame suffers from being overscored — not just by the original music composed by Harry Escott but the misuse of lots of Bach, mostly taken from Glenn Gould's recording of "The Goldberg Variations," alongside John Coltrane's instrumental cover of Rodgers & Hammerstein's "My Favorite Things" from The Sound of Music, Chet Baker's "Let's Get Lost" and Blondie's "Rapture" — all of which get played at near deafening levels at times to compensate for the largely dialogue-free sections. In a way, Shame sounds as if it's trying to be one of those late-night Skin-emax movies, only employing a classier soundtrack to play over the continuous coitus.

When Shame finally comes to a stopping place, they do allow Brandon and Sissy to have a conversation (more like a fight) to pretend that a point might have been hiding all along. Brandon has had it not being able to screw strangers in his own bed so he orders his sister out, telling Sissy that he's not responsible for her. He didn't give birth to her. "I'm trying to help you," Sissy tells him. "How are you helping me, 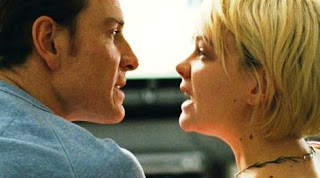 huh? How are you helping me? How are you helping me? Huh? Look at me. You come in here and you're a weight on me. Do you understand me? You're a burden. You're just dragging me down. How are you helping me? You can't even clean up after yourself. Stop playing the victim," Brandon responds bitterly. I have to agree with Brandon there. The film hasn't given any indication that Sissy has arrived to stage some sort of intervention. Hell, aside for her stumbling upon some live sex chat woman calling out for Brandon on his laptop and walking in on him beating off once, nothing indicates that Sissy has clued in on her brother's lifestyle. Then again, I don't notice much of a mess. "I'm not playing the victim. If I left, I would never hear from you again. Don't you think that's sad? Don't you think that's sad? You're my brother," Sissy declares. No, what's truly sad about this situation is watching talented actors such as Michael Fassbender and Carey Mulligan attempt to squeeze some sort of emotional truth from a movie that contained nothing but artifice up until that point. Fassbender tries his best, but he's burdened with the heavy lifting since he's in every scene and the shallow script leaves him rudderless. Carey Mulligan comes off looking so much better because her part takes up less time on screen so it's easier to give Sissy life even if the screenplay doesn't provide her any more depth than it does Brandon.

That scene between the siblings toward the end of the movie reinforces what we got a slight glimpse of in an earlier scene where Brandon takes a co-worker named Marianne (Nicole Beharie) out for dinner. She's separated from her husband. While Brandon behaves meek and pliable at the restaurant, accepting every suggestion that either Marianne or the waiter (Robert Montano) makes, relationship talk brings out the opinionated side of him. He tells her that he doesn't believe in relationships — sees no point in them. When Marianne asks him how long his longest relationship lasted, Brandon answers four months. The two part for the night at her subway stop. The next day at work, we see what kind of universe Shame resides in. Marianne expressed a bit of dismissive judgment about Brandon the night before, but he takes her into the break room and kisses her passionately and Marianne willingly skips off from work with him to a hotel for a sexual tryst. This exemplifies the filmmakers' attitude toward pretty much every character in the movie.

The longer I think about Shame, the worse the film gets. If you set out to make a provocative film, it helps to have something to say. Your aim should be to provoke thought, not anger about the time wasted by talents such as Fassbender and Mulligan making it and movie lovers such as me watching it.

Comments:
I think we might have seen a different movie, perhaps there was a separate US cut of Shame but certainly your review bears little resemblance to the sublime piece of work that I saw in Glasgow a few weeks ago and which has stayed with me since to the degree that I've thought about it every day.

Brandon's addiction and Cissy's hysterical over-sexualisation seems to me pretty obviously a response to some childhood trauma which is all the better for being unspecified but my guess is she was abused, he was unable to protect her and now tortures himself for his feelings of lust in general but towards her in particular. So no he's not pissy cause he can't shag prostitutes in the house, rather he's repulsed by his own complicated mix of feelings towards her.

I could go on but I'm sure you get my point. This movie worked for me in the gut-wrenching way that only my very favourite movies do. Plenty of which get good review space on this site so I'll be back hoping for something more emphatic in future.

Thankfully, there wasn't a different U.S. cut. I will give them credit for having the courage to release it here with an NC-17 rating, which most U.S. studios chicken out and either make cuts for an R or release unrated because so many theater chains won't show NC-17 films and many newspapers won't run ads for them. I'm glad it worked for you, but it just didn't do it for me. That's a plausible theory for Brandon and Sissy but that doesn't really explain how the other characters in the film act the way they do. I was looking forward to the film just because I've become such a fan of Fassbender and Mulligan as well, but even viewing it through your scenario, it seems as if the movie's approach was a bit too simplistic and predictable. It's pretty obvious soon after Sissy is introduced what will happen toward the end of the film. I won't say more than that in order not to spoil anything for those who haven't seen the film. Again, I'm glad you liked it. There are no right or wrong opinions about movies -- unless the movie is Bio-Dome and someone says they like it. Those people need to be institutionalized.

Clearly, you disliked this film even more than I did...and, it must be said, I really, really disliked it. The only way a film like this (100 minutes of masochists debasing themselves) is ever going to work is if it succeeds in making you care about the people you're watching. I knew director McQueen wanted me to feel pity for Brandon the sex addict, but given how underdeveloped and underwritten the character is, my empathy never kicked in; instead of finding his behavior sad, I simply found it repellent. It's easier to latch onto the character of Sissy, to a degree, because Mulligan (who's such a whiz at vulnerability she could probably project it encased in bronze armor) at least shows us what a bottomless pit of need the character is; it's not much of a personality trait, but at least it's something. Fassbender's Brandon has no personality whatsoever - perhaps McQueen and Morgan have made him an empty vessel by design, but it's a drain on both the film and the performance from a dramatic standpoint. I actually think this is a fairly accurate depiction of sex addiction - and yes, Eddie, there are plenty of New Yorkers who function on the emotional level of 14 year-old boys when it comes to the bedroom stuff (the stories I've heard, the things I've seen...) - but as Shame demonstrates, clinical accuracy doesn't always translate into good filmmaking. Frankly, a less realistic film might have been a much more interesting one.