From the Vault: Georgia 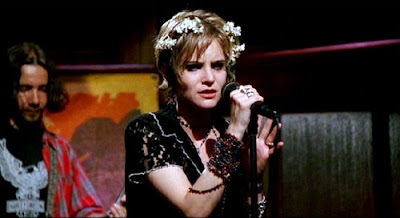 Like Leaving Las Vegas, Georgia will not be everyone's cup of tea, at least based on the astounding number of walkouts during the screening I attended. While Georgia doesn't approach Vegas' level of greatness, it is a consistently fascinating character study strengthened by both acting and singing.

Jennifer Jason Leigh stars as Sadie, younger sister to the film's title character, a hugely successful singer. Sadie aspires to be a singer as well, but she lacks Georgia's talent. Instead, Sadie concentrates more on her suffering than her singing, bouncing between jobs and gigs as well as alcohol and heroin.

Georgia (Mare Winningham) has long served as Sadie's enabler, supplying her with cash and a place to stay when Sadie bottoms out, which she does frequently. The two share a sibling affection poisoned by resentment — Sadie's jealousy of Georgia's success and Georgia's fatigue at being Sadie's savior.

Georgia was directed by Ulu Grosbard and written by Barbara Turner, Leigh's mother. The film could have been a masterpiece of observation, but it drags a bit too much in its last section once Sadie finally enters detox.

What's so fascinating about Georgia is the decision to play most of its key scenes in song instead of dialogue, culminating in an excruciating scene where a completely plastered Sadie delivers a long performance of a Van Morrison song at an AIDS benefit that Georgia is headlining.

Leigh has shown she's a master at playing this sort of desperation before, but she enlivens Sadie with humor and an enthusiasm that seems to belie the depths of her problems. Winningham's role is quieter, but her acting is just as sharp, especially with Leigh to bounce off.

Other fine performances come from Max Perlich as a young man with a crush on Sadie, Ted Levine as Georgia's husband and John Doe as Sadie's ex-lover and bandmate.

Georgia won't be for all tastes, but for discriminating moviegoers who relish finely tuned observations over easy-to-follow formula, Georgia should not be missed.