Most freeborn things would submit to anything for a salary 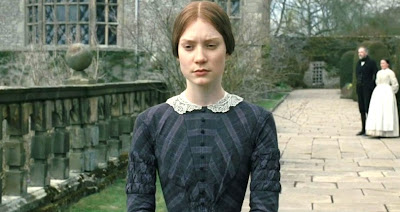 By Edward Copeland
Sometimes I feel like Burgess Meredith at the end of the classic Twilight Zone episode "Time Enough at Last" when he decides being the last man on earth is a small price to pay if that means he'll finally get to catch up on his reading — then he drops his glasses, breaking the spectacles while trying to find them. Fortunately, I'm neither the last man on earth nor, despite my many health problems, do I have bad sight. However, I've never allowed myself enough time to read every book or writer that I've wanted to or should have. One author on that list happens to be Charlotte Brontë. Amazingly, I've never even seen any of the more than two dozen adaptations of Jane Eyre that have been made for movies or TV dating back to 1910 until the 2011 version. Directed by Cary Joji Fukunaga and starring Mia Wasikowska in the title role and the busy Michael Fassbender as Rochester, I can't possibly speak with authority about how it compares with previous incarnations but I can say that this Jane Eyre had me engrossed from the start and wishing I'd read that novel at some point.

What I find funny is that though I've never read Jane Eyre or seen a depiction of the novel, I did see John Duigan's 1993 film of Wide Sargasso Sea, based on Jean Rhys' 1966 novel that imagined the story of Rochester's first wife in the West Indies. At the time I saw it, when the movie finished an audience member commented, "Now it leads to Jane Eyre" so though I really didn't know the story of Jane Eyre, I knew who was in the attic and started that fire.

Enough of that. We should be discussing this sumptuous movie itself, which landed a single Oscar nomination yesterday for Michael O'Connor's costumes. Quite deserving but cases could have been made for the art direction by Will Hughes-Jones, Karl Probert and Tina Jones; the cinematography of Adriano Goldman; and, most especially, Dario Marianelli's luscious and magnificent score.

That only takes into account the tech categories. This marks Fukunaga's fifth film as a director, but I haven't even heard of the other four, let alone seen them, but he does a helluva job with a great cast, particularly Jamie Bell as St. John Rivers, Amelia Clarkson as the young Jane, Sally Hawkins as the spiteful Mrs. Reed, Imogen Poots as Miss Ingram and Dame Judi Dench as Mrs. Fairfax.

Then there are the two leads. I haven't seen Shame or A Dangerous Method yet, but based on Jane Eyre and even X-Men: First-Class, Michael Fassbender probably deserved an Oscar nomination for best actor just for his body of work in 2011. He fills Rochester with the requisite amounts of mystery and romance, longing and guilt.

Finally and best of all we have Mia Wasikowska's work as Jane. This actress seldom disappoints even if her movies do (such as The Kids Are All Right and Alice in Wonderland) or get little notice (That Evening Sun). Jane Eyre provides her finest role yet. She's smart and willful, yet understandably guarded. Wasikowska deserved consideration, but I can't imagine that nominations aren't coming her way eventually.

Jane Eyre might seem to most people like territory that has been plowed before and often. I know that's true by the numbers but I also recognize a very good film when I see one and this Jane Eyre qualifies.