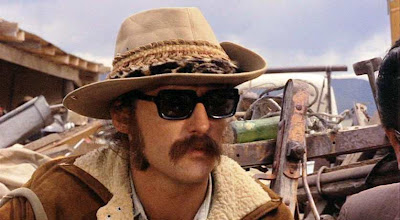 How many odd turns can one man's life and career take? There's probably no limit, but Dennis Hopper, who died at 74 after a long battle with cancer, took a lot of them: From young actor of film and TV in the 1950s to counterculture icon of the 1960s and '70s (while adding director to his resume and still working with the likes of John Wayne); from nearly unemployable because of drugs to a career comeback in the mid-1980s before frequent returns to TV. On the side, he managed to find time to be a prolific photographer, painter and sculptor. His later years also brought the strangest twist for the hippie hero: he became a Republican. Still, it's his film and TV work that will be his legacy.

An interest in acting led Hopper to the fabled Actors Studio in New York where he studied under Lee Strasberg for five years. As was the case with many of the studio's actors, much of his early work was on 1950s television, but he made his film debut with friend and fellow student James Dean in 1955's Rebel Without a 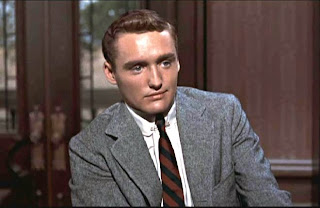 Cause. He worked again with Dean in the last of Dean's three films, Giant, in 1956. Much of his early work both on television and on film was spent in westerns including 1957's Gunfight at the O.K. Corral as Billy Clanton opposite Kirk Douglas and Burt Lancaster. The same year, Hopper got to be an emperor, Napoleon no less, in Irwin Allen's The Story of Mankind. For the next several years, his work was restricted mainly to television, including The Twilight Zone and The Defenders. His first crossover toward the counterculture might have occurred in 1964, when he played the title role in an episode of Petticoat Junction titled "Bobbie Jo and the Beatnik." Hopper still did plenty of westerns, appearing opposite John Wayne for the first time in 1965's The Sons of Katie Elder. Two years later brought Hopper's first full-fledged entrance into the drug culture as far as movies were concerned as he co-starred with Peter Fonda in The Trip, which was directed by Roger Corman and written by Jack Nicholson. That same year, he appeared in Cool Hand Luke. In 1968, Hopper appeared in Clint Eastwood's Hang 'Em High.

With 1969, Hopper embarked on his first directing project: starring with Peter Fonda and Jack Nicholson in the counterculture classic Easy Rider. The same year, he also got to be one of the bad guys opposite Wayne's Rooster Cogburn in True Grit. Two years later, he starred and directed again (and provided the story) in The 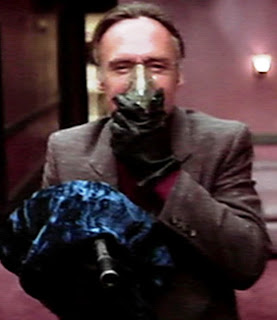 Last Movie, which even featured an acting turn by director Samuel Fuller. Following a few other films, he became the second of many actors to put their stamp on Patricia Highsmith's famed serial killer Tom Ripley in Wim Wenders' 1977 The American Friend. During his days of heavy real life drug use, Hopper danced through the role of a photojournalist in Francis Ford Coppola's Apocalypse Now. Despite his out-of-control private life, Hopper still managed to snag roles, though nothing of real significance either on film or television, despite small roles for major directors such as Coppola's Rumble Fish, Sam Peckinpah's The Osterman Weekend and Robert Altman's O.C. and Stiggs. Then came 1986 and Hopper's huge comeback. Two roles brought him back on the radar and earned him respect. First, came what may end up being his most memorable role as Frank Booth in David Lynch's Blue Velvet. Booth was one of the most bizarre villains ever dreamed up for a movie, frightening and funny, prone to use nitrous oxide as he assaults the woman he's obsessed with and seldom producing a sentence without at least one use of the F word. The second film was far more conventional. Hoosiers, the tale of an Indiana high school basketball team, gave Hopper the role of an alcoholic assistant coach opposite Gene Hackman. Both movies were the stuff of Oscar buzz and come nomination day, Entertainment Tonight even set up cameras and watched with Hopper as the nominations were announced on TV. "They went with Hoosiers," he said as his name was announced. You could tell he was happy to be nominated but at the same time slightly disappointed that the Academy went with the safer choice. There was a third 1986 film, one which Hopper publicly disowned, but which I think he shouldn't be ashamed of. He gave an over-the-top turn in an over-the-top and absolutely great satire Texas Chainsaw Massacre 2. He should be proud of the avenging Texas ranger, venturing through caves with mini-chainsaws in a holster while he sang, "Bringing in the Sheaves."

After that, he worked steadily, though often as the broadest of villains. There were still textured performances to be found such as the hermit with the blowup doll in 1987's River's Edge. He got to be one of Theresa Russell's wealthy victims in Black Widow. In 1988, he returned to the director's chair with Colors, a police vs. gang drama starring Sean Penn and Robert Duvall. When Penn took his first try at directing, Hopper snagged a role in Penn's The Indian Runner. One of his most enjoyable later turns comes in the very 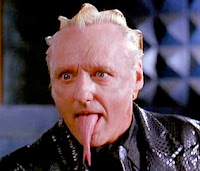 underrated 1990 film Flashback, where he played a long-on-the-lam '60s activist who is being taken back to jail by FBI agent Kiefer Sutherland. The movie is funny and full of fresh twists and deserves a better reputation than it has — hell, it deserves a reputation, period. In 1993, he was a truly busy man with a mix of good and goofy performances in films that ranged from the sublime to the ridiculous. He was charming in the so-so Boiling Point, part of the solid ensemble in John Dahl's Red Rock West and the evil King Koopa in Super Mario Bros. His finest 1993 moment though came in a superb acting duet with Christopher Walken in the Quentin Tarantino-scripted, Tony Scott-directed True Romance, really the best part of the entire film.

Following the next year, he created another memorable screen villain in the surprise hit thriller Speed staring Keanu Reeves and boosting Sandra Bullock to stardom. His 1995 villain was not nearly something to be as proud of, but then neither was the movie as he got trapped in the Kevin Costner disaster

Waterworld. The next year, he got a smaller role as a bigwig in art in artist Julian Schnabel's directing debut, Basquiat. 1999 brought him parts in EdTV and the nearly forgotten Jesus' Son starring Billy Crudup. One of his last memorable villains came late in the run of the first season of television's 24, when the writers realized they had killed off all their villains too early and needed a big one to fill out the remaining hours in their first day. Hopper filled the part as Victor Drazen, a Serbian war criminal with a bad accent and a grudge against Jack Bauer. Most of his films after that were forgettable, though he did appear in another installment in George Romero's zombie series, Land of the Dead, a right-wing try at making a satire about a Michael Moore-type character called An American Carol, a short-lived TV series titled E-Ring and a part in a TV version of the movie Crash. Despite his late turn toward the GOP, Hopper did admit, as did many Republicans, that in the 2008 election that after voting for Bush twice, he was voting for Obama. During the long final months of his illness, Hopper did manage to make a public appearance March 26 looking very frail to receive a star on the Hollywood Walk of Fame. According to IMDb, an unconfirmed report places him in a completed film and another one in post-production, so there may be some more Dennis Hopper to see. As prolific as he was though, I doubt anyone has seen all his work that's out there now. R.I.P. Mr. Hopper. In dreams, we walk, with you. 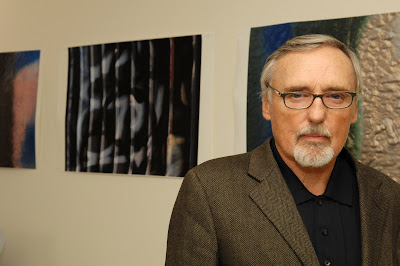 Comments:
The man had an extraordinary career. I think I'll remember him most for his roles in EASY RIDER, BLUE VELVET and TRUE ROMANCE. A fine tribute, Ed. Thanks for this.