Trouble until the robins come

By Edward Copeland
My relationship with Blue Velvet — and no other word than relationship accurately describes my experiences with the film — has been a long and bumpy one. When I first saw it at a midnight showing in 1986, in a bad mood and dragging Wagstaff from a school dance, my only previous David Lynch experience had been Dune. I hadn't seen Eraserhead or The Elephant Man at that point and I hated Dune. (I knew I was in trouble when I went to see that movie and they handed me a page of definitions as I went into the theater. Was I supposed to memorize them before the film began? Did they think I brought a flashlight?) My initial reaction to Blue Velvet was equally harsh. Then, a few years later, came Twin Peaks and as I fell in love with that series, it led me to reassess Blue Velvet and eventually my thoughts on the film grew kinder. This week, I revisited the film again and my reaction was different once again. It really is sort of a silly movie, though it did lay the groundwork for Lynch's later, greater successes with similar material on Twin Peaks and with Mulholland Drive. 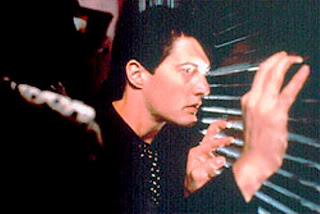 In his recent book Catching the Big Fish, Lynch wrote about the intuitive nature of his filmmaking and I believe that really shows in Blue Velvet and all his other works. In a way, looking at the film again in the context of his book, Blue Velvet really does seem to be less a stand-alone film than one chapter of a larger Lynch work in progress. (Regretfully, I still haven't had access to see INLAND EMPIRE to see how that plays in Lynch's artistic progression.) All the elements that I loved about Twin Peaks are there: the mix of the horrific, the humorous and the downright bizarre. What I found absent from Blue Velvet in this viewing that were corrected in his later works is that the characters are not drawn as sharply and some of the dialogue comes off as tinny and ludicrous. Kyle MacLachlan was great as Cooper on Twin Peaks, but when he has to deliver lines as Jeffrey Beaumont in Blue Velvet such as "Why are there people like Frank?" in a semi-hysterical tone, it's hard to take seriously or humorously. Laura Dern finds herself similarly hampered as high school girl Sandy, daughter of a police detective and Jeffrey's partner in amateur sleuthing. 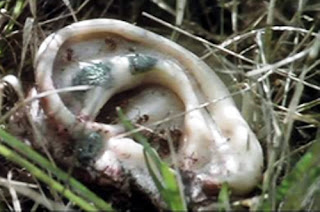 Despite the awkward moments though, Blue Velvet still retains a lot of filmmaking power. Lynch's background as a painter really comes through in the beautiful and sometimes grotesque images he puts on his cinematic canvas. Be it the fabled opening shot from the picket fence and roses down through the bugs in soil or just odd and inexplicably compelling sequences such as Dean Stockwell, bearing a resemblance to Joel Grey as the MC in Cabaret, lip-synching Roy Orbison's "In Dreams," Lynch's visual vision is striking. As for the "mystery" at the center of Blue Velvet, in a way it portends "Who killed Laura Palmer?" in that the puzzle really almost is irrelevant to the film itself. The reason it didn't get the backlash that Twin Peaks eventually endured is that the movie does wrap up its story and the villain (Dennis Hopper) is front and center. Hopper really succeeds the most at balancing the dual nature of the story, making Frank both frightening and funny, whether explaining to Jeffrey that he doesn't want to get a love letter from him because it's a "bullet from a gun" or chastising Jeffrey's preference for Heineken with "Heineken! Fuck that shit — Pabst Blue Ribbon!" 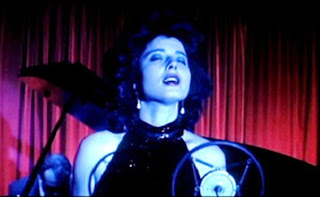 So now, 21 years after I first saw Blue Velvet, my view of the film has transformed again and I think in a way it's something that Lynch expects. In Catching the Big Fish, he writes about his refusal to do DVD commentaries because he doesn't want to color a viewer's reaction and I think he expects viewers to find something new each time. In a way, that is what make Blue Velvet and most of Lynch's works so special — they defy easy categorization and final judgments. You can't slap any sort of rating scale on his work and expect it to stand. Any review of his work, unlike the movies of just about any other filmmaker, truly capture a moment of time. Today, I find Blue Velvet more goofy than good. Who knows what I will think if I watch it again in another five or 10 years, but I'm certain that I will watch it again in the future and that probably says more about its intrinsic worth than anything else. The biggest mystery in Blue Velvet is not its story but how one film can keep evolving in a viewer's perceptions more than 20 years after it was first made.

Comments:
To me, Blue Velvet is some of Lynch's best work to date. It has all his traits, in a storyline you can actually follow from start to finish. And characters to take you there no matter how bizarre it gets.

As strange as it is to see Dean Stockwell in makeup singing In Dreams from a construction light, or to see a fat woman dance on a car as Dennis Hopper puts layer after layer after layer of lipstick on his face, you always have Klye there to ground the scene. To be all that is good to all this is very bad happening around him. And I always saw him as the super good boyscout. For some reason or another, I always bought every line he said.

I do agree with you some of the dialogue though. Lynch really came into the more interesting dialogue with Twin Peaks. And Kyle's character is still strange but has interesting quirks to make him lovable as Agent Cooper. But that's TV and you need that stuff to keep the show going so the character doesn't get boring.

Anyway, to me Blue Velvet continues to amaze me and hold up as one of the best movies I've seen. It has gotten under my skin and won't come out.

And I think the fact that the movie continually changes every time you see it is a testimony to how strong it is.

EC, you know from my House Next Door philistine status how much I can't stand David Lynch's movies (Straight Story and most of Mulholland Drive notwithstanding). I think he's conducting an experiment on how much praise he can get from "the good critics" before he shows up to chastise them for being so wrong about what his movies mean. I admire his hustle, but can't stand his movies and refuse to do what far too many people do: I'm not going to pretend to know what Lynch is doing.

Inland Empire might have actually been interesting if he hadn't shot it on the Fisher Price camera, making it an endurance test to watch. As someone with visual problems and eye stress, I wanted to stick a fork in Lynch's eye for that movie, and then stab myself in the ass with the same fork for being a damn fool for going to see it.

Blue Velvet was on a few weeks ago while I was in Canada, and I normally don't revisit movies that made my ten worst list, but it was either that or old Spider Man cartoons dubbed into French (you haven't lived until you've heard the Spiderman theme song in French). My reaction was almost exactly the same: I hated every minute of it. I used to think it was just stupid and misogynist. Now I realized, in addition to that, it was the grandfather of all those "miserable suburban bullshit" movies like House of Sand and Fog and Little Children. This made me hate it even more. Stop blaming American Beauty, people!

I will say that I appreciated Hopper's performance a little more than before, though I disagree with the critical consensus that his Hoosiers Oscar nod was because the Academy was too afraid to nom him here. In Hoosiers, Hopper seemed normal. Now THAT is acting worthy of an Oscar nomination. Frank Booth damn sure ain't acting. That looked like the usual "Weekend at Hopper's."

the films that lynch directs and writes/co-writes are abstract art. the viewer must invest something of himself with each viewing. the meaning will be determined by the viewer's state of mind during each viewing.

"when he has to deliver lines as Jeffrey Beaumont in Blue Velvet such as "Why are there people like Frank?" in a semi-hysterical tone, it's hard to take seriously or humorously." it's both at the exact same time.

although it is a bad review, i suggest you check out danny peary's review of the film in his cult movies 3 book. it is the best ever essay/review written on the film.

I wouldn't say it is a bad review, merely a mixed one, where some things work and others don't. He better captured the same ideas in Twin Peaks and his best feature is Mulholland Drive. Of course, the thing most people never seem to comprehend is that ALL reviews are subjective opinions so no one's review is right or wrong. If everyone thought the exact same thing about every movie, we wouldn't need critics. (There is one exception: Anyone who thinks Bio-dome is good should be committed.)

i would say that blue velvet and eraserhead are lynch's best films; followed by lost highway and twin peaks: fire walk with me.