From the Vault: True Romance 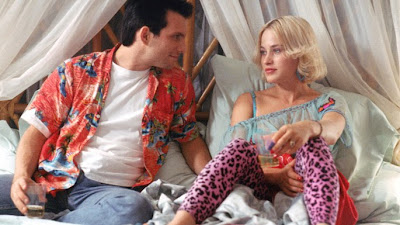 When Reservoir Dogs came out last year, some critics suggested writer-director Quentin Tarantino had spent too much time working in a video store. While I still admire Reservoir Dogs, those critics may have had a point based on Tarantino's screenplay for Tony Scott's film True Romance.

A strange puree of various genres and memorable plot devices, True Romance frequently is a likable though ultimately unsatisfying romp.

Christian Slater stars as Clarence, a young Detroit man who spends his life working in a comic book store until an apparent chance encounter with a woman named Alabama (Patricia Arquette) begins a strange chain reaction of events.

As the plot unfolds, so much deja vu washes over the audience that the viewer risks drowning in nostalgia. The script snatches bits from Easy Rider, bits from countless on-the-run films and a final result that plays like a poor man's Wild at Heart, including a dream Elvis (Val Kilmer) who offers Slater advice.

Scott downplays his usual glitzy style for this low-end road picture but as is usually the case, the Top Gun director fails to deliver anything substantial.

True Romance does have some merit. It contains some strong acting, especially a small role by Bronson Pinchot, James Gandolfini as a ruthless gangster named Virgil, and, in the film's most memorable scene, a memorable duet between Dennis Hopper and Christopher Walken.

On the whole, True Romance ends up being a quirky film whose positive factors can't overcome its negative attributes.