"My Rifle, My Pony and Me" (Rio Bravo tribute, Part II)

CONTINUED FROM "A GAME-LEGGED OLD MAN AND A DRUNK. THAT'S ALL YOU GOT?" 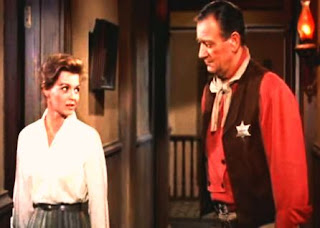 While Sheriff Chance took on a major task by arresting Joe Burdette and incarcerating him in his small Presidio County jail, with Stumpy left to guard the bad guy most of the time, he still bears the responsibility for maintaining the law elsewhere in his town, something he accomplishes through street patrols and his nights staying at The Hotel Alamo (of all the names to pick) run by Carlos Robante (Pedro Gonzalez Gonzalez) and his wife Consuela (Estelita Rodriguez). One night, a poker game piques his interest as two of the players (Angie Dickinson, Walter Barnes) fit the profile of two hustlers warned about on handbills. After a cursory investigation, Chance arrests the woman, who goes by the name Feathers. She declares her innocence and Chance fails to find the crooked cards on her after she's left the table following a huge winning streak. When he returns though, he does find the stacked deck on the man, who has raked it in since her departure and tells him to return his ill-gotten gains and be on the morning stagecoach. He suggests that Feathers do the same, but she decides to stick around. 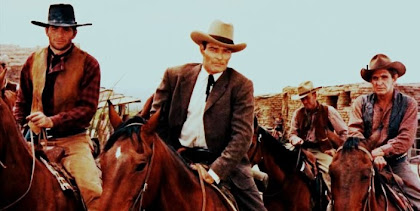 That next day, the Burdettes arrive as expected, led by Joe's smooth brother Nathan (John Russell, the gaunt, veteran actor of mostly Westerns where he usually played the villain. His second-to-last film was as the cold-blooded killer in Clint Eastwood's Pale Rider). He asks Chance why the streets appear so full of people. Chance offers no explanation, but suggests that perhaps gawkers came to town, drawn to the possibility that the Burdettes planned to put on a show. 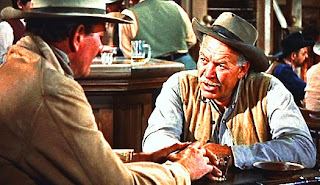 Chance makes his nightly trek to the Hotel Alamo. When he gets there, Spencer pulls him over for a drink. The wagon master has heard of the trouble Chance faces. "A game-legged old man and a drunk. That's all you got?" Spencer asks in disbelief. "That's what I got," Chance responds. Spencer offers himself and his men as help against the Burdettes, but the sheriff expresses reluctance to take responsibility for others. He does ask about the confident young gunman Colorado that Spencer has hired. If he is as good as he thinks he is and lacks the family ties of the older men, Chance would be willing to take him on if Colorado agrees. Spencer calls Colorado over, but the young man politely declines, earning Chance's respect for being smart enough to know when to sit out a fight. Not long afterward, while Feathers flirts again and Chance urges her to get on the morning stage, shots ring out on the street and Spencer falls dead. Later, Nathan Burdette makes his first visit to see his brother Joe, despite Stumpy's withering verbal assaults, at the jail. First, Nathan wants the sheriff to 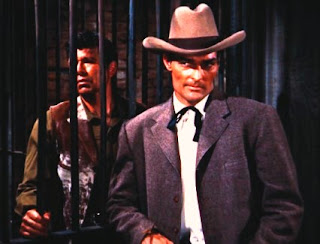 explain why his brother looks so beat up. "He didn't take too kindly to being arrested for murder," Chance tells Nathan while Joe denies the shooting was murder. Nathan asks how Chance can be so certain or, at the very least, why Joe isn't being tried where the alleged murder occurred. Chance nixes that idea, content to let the U.S. marshal handle Joe Burdette and try him elsewhere. Nathan silkily makes no overt threats, but certainly implies that Joe might not remain in the Presidio County jail by the time that marshal shows up, especially if the sheriff relies on a drunk and an old man as his backup. Chance isn't in a mood to hide his cards. "You're a rich man, Burdette. Big ranch, pay a lot of people to do what you want 'em to do. And you got a brother. He's no good but he's your brother. He committed 20 murders you'd try and see he didn't hang for 'em," the sheriff spits out. "I don't like that kinda talk. Now you're practically accusing me," Nathan Burdette says, but Chance continues. "Let's get this straight. You don't like? I don't like a lot of things. I don't like your men sittin' on the road bottling up this town. I don't like your men watching us, trying to catch us with our backs turned. And I don't like it when a friend of mine offers to help and 20 minutes later he's dead! And i don't like you, Burdette, because you set it up." If war wasn't brewing before, it was now. 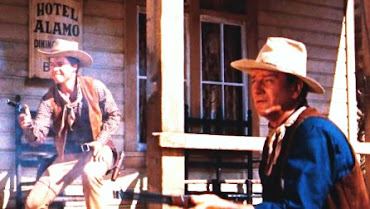 The murder of Spencer fully incorporates the last two major characters more fully into the film and the action. With his boss dead, Colorado at first finds himself content to take his pay from the slain wagon master's possessions and remains determined to mind his own business. Once he witnesses some more of the Burdette brutality, Colorado decides to join up and Chance deputizes him. Colorado becomes part of the team and helps Chance escape an ambush, an ambush for which the sheriff seems prepared to occur, quickly pumping off rounds from his rifle. "You always leave the carbine cocked?" Colorado asks. "Only when I carry it," Chance replies. Originally, Hawks opposed casting Ricky Nelson, though the director admits he probably boosted box office. He had sought someone popular with young viewers, but felt Nelson — who turned 18 during filming — lacked age and experience for the part. Hawks had chased Elvis Presley for the role, but as often was the case, Col. Tom Parker demanded too much money for his client and the Rio Bravo production had to take a pass. The pseudo love affair between Feathers and Chance also heats up, though Wayne's discomfort with the romantic scenes with Dickinson is readily apparent. Wayne felt uneasy about the 25-year age gap between him and Dickinson. On top of that, nervous studio bosses wanted no implication made that Chance and Feathers ever sleep together. Double entendres and innuendos abound, but truthfully more sparks fly in brief scenes between Martin and Dickinson and Nelson and Dickinson than ever produce friction in the Wayne-Dickinson scenes. What becomes most interesting about the relationship between Feathers and Chance is Feathers' transformation into the sheriff's protector, keeping watch over him as he sleeps to make sure that no Burdette makes a move on him. 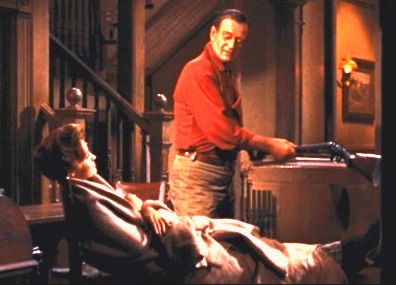 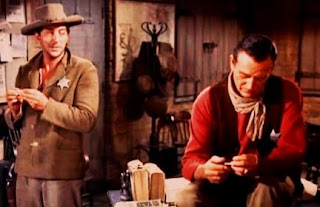 You don't need to know how the rest of Rio Bravo unfolds. Besides, part of what makes the film so fascinating and more than your ordinary Western comes from the multiple tones Hawks balances. A viewer seeing Rio Bravo for the first time couldn't positively predict what mood shall prevail by the final reel: light-hearted, tragic, heroic, romantic, some combination of those elements. At any given moment, you might change your mind. Most of this uncertainty reflects the nature of the character Dude. With the possible exception of Feathers, almost every other character in the film stays on a static path. Dude captures our attention the most because of the dynamics within him. Will he maintain the upper hand in his battle with booze or will he fall off the wagon again and if he does, what consequences does that 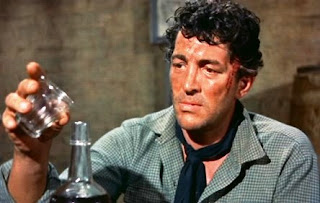 have for the others? Even sober, he's prone to depression, low self-esteem and self-pity. Still, he can croon a song or be a crack shot. A part this multifaceted requires a talented actor and back when Rio Bravo was made, Dean Martin wouldn't be one of the first names to jump to your mind. However, in the years 1958 and 1959, soon after the end of his partnership with Jerry Lewis, Martin turned in two impressive performances (perhaps three, but I haven't seen 1958's The Young Lions). In 1958, he gave a great turn as a professional gambler Bama Dillert in Vincente Minnelli's adaptation of the James Jones novel Some Came Running starring Frank Sinatra and Shirley MacLaine. He followed that with his astoundingly good work in Rio Bravo. While Martin continue to make entertaining films, for some reason those two years stand out as an aberration and he never got roles as good as Bama Dillert or Dude again.

Hawks' behind-the-scenes collaborators provided as much of the magic of Rio Bravo as its cast. From Russell Harlan's crisp and lush cinematography to Tiomkin's score that complements Hawks' leisurely pacing well. Tiomkin also teamed with lyricist Paul Francis West for the film's songs — "Cindy" and "My Rifle, My Pony and Me" in the extended musical interlude by Dude, Stumpy and 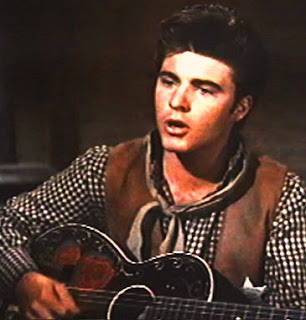 Colorado as well as the title song. Reportedly, Wayne joined the singing at one point until they decided it inappropriate for the sheriff to take part (and also because the Duke allegedly could not carry a tune). In another instance of borrowing from past work, at Wayne's suggestion, Tiomkin actually reworked the theme to Red River into the song "My Rifle, My Pony and Me." Tiomkin also composed "Degüello," aka "The Cutthroat Song," which the Burdettes play to psych out the good guys guarding Joe. The film claims the music comes from Mexico where Santa Anna's soldiers played it continuously to unnerve those holed up inside the Alamo. Wayne loved the music and the story so much, even though the tale wasn't true, he used it in his film The Alamo the following year. His screenwriting team of Jules Furthman and Leigh Brackett both had worked with Hawks as a team and separately before and after Rio Bravo. Previously, Furthman and Brackett co-wrote Hawks' classic 1946 take on The Big Sleep. Furthman also co-wrote Come and Get It and To Have and Have Not and did a solo turn on Only Angels Have Wings. The legendary Brackett, despite her extensive screenwriting work, made a name for herself as a novelist, largely in the male-dominated field of science fiction. In Schickel's commentary, he refers to Brackett as an example of a real life Hawksian woman. In fact, before her death, the last screenplay she co-wrote was The Empire Strikes Back. In another non-Hawks project, she returned to Philip Marlowe when she wrote the screenplay for Robert Altman's The Long Goodbye. In addition to the Hawks titles already mentioned for Brackett, she also wrote the screenplay for 1962's Hatari! and co-wrote 1970's Rio Lobo. The DVD commentary also includes director John Carpenter, who names Hawks as his favorite director, and paid tribute to Leigh Brackett by naming the sheriff in the original Halloween after her.