BLOGGER'S NOTE: This post is part of The Howard Hawks Blogathon occurring through May at Seetimaar — Diary of a Movie Lover 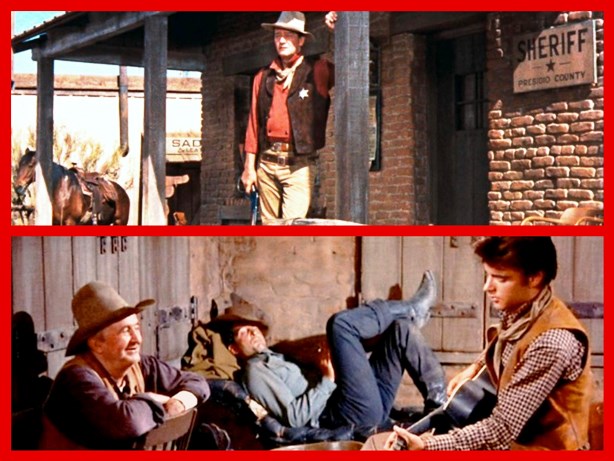 By Edward Copeland
After the opening credits end, Howard Hawks begins Rio Bravo with a sequence somewhat unusual for a Western, or, for that matter, any film made in 1959. On the other hand, beneath the surface of Rio Bravo 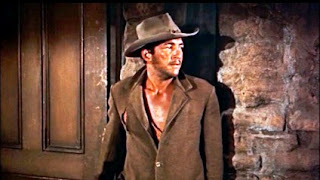 you'll find many more layers than your typical Western. The scene almost plays as if it hails from the silent era as a haggard-looking Dean Martin tentatively enters a large establishment providing libations, meals and even barber services. Martin's character's face tells you that he wants to resist liquor's siren call, but he's weak and he struggles. A man at the bar (Claude Akins) spots him after purchasing his own drink. He flashes Martin a smile, gestures at his glass and asks with his eyes whether Martin desires one. Aside from the film score and the ambient noise of the establishment's environs, no dialogue emanates from any of the characters that Hawks' camera focuses upon in this scene that's practically choreographed in mime. Martin's character replies with an eager but wordless "yes" and Akins 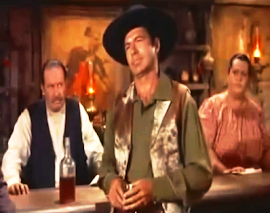 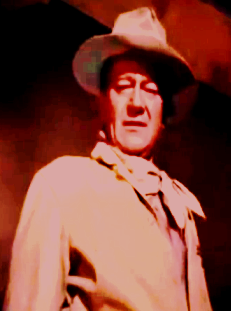 gets down on his hands and knees, prepared to retrieve the money from the spit-out tobacco. Before he can, a foot kicks the spittoon out of the way and he looks up to see John Wayne towering above him in a great low-angle shot looking up at The Duke and giving him one of his many great screen entrances. His character's arrival also sets several of the story's strands into motion. You see, the man (Akins) taunting Dude (Martin) happens to be Joe Burdette, the blackest sheep of a powerful clan that gets away with practically anything it wants to do. Joe oversteps this time though as he continues to tease Dude after a brawl that includes the man who kicked over the spittoon, Sheriff John T. Chance (Wayne), Dude's boss when he's sober enough to carry out duties as deputy. Joe and his buddies keep harassing Dude when a sympathetic patron (Bing Russell) steps in, urging Joe to cut it out — still through gestures, not words. Joe Burdette doesn't take criticism well and shoots the unarmed man to death and exits the building to stagger to another saloon. Chance soon enters behind and speaks the film's first line, "Joe, you're under arrest." 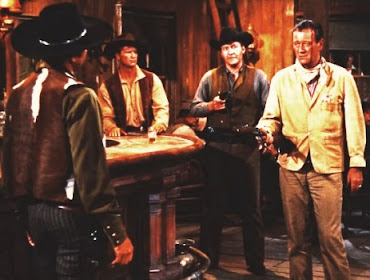 Burdette and his buddies don't take the sheriff seriously and seem intent to mow the lawman down when a still-shaky Dude arrives as backup, having composed himself enough to shoot the guns out of a couple of bad guys' hands. Seems Dude might have a drinking problem, but he's also Chance's deputy, and the lawmen take Joe into custody where the movie's waiting game begins. Can Chance, Duke (always battling the battle) and Chance's other deputy, Stumpy (Walter Brennan), aging and falling apart physically, keep Joe locked up until the U.S. marshal's arrival several days later to take Joe into custody for trial before Burdette's clan tries to free him In a few short minutes of screentime, the main story that drives most of Rio Bravo's 2 hours and 20 minutes has been set. Sideplots await, but all basically will converge in the main thread. Though nearly 2½ hours long, Hawks doesn't rush his film along, yet somehow he still keeps it moving and it holds its length incredibly well.

I'm not reporting earth-shattering news when I inform readers that Howard Hawks belongs to that select group of directors who excelled in every genre he attempted. One thing that sets Rio Bravo apart from Hawks' other works is that, while it resides in the Western genre, it snatches from many others — romantic comedies, war tales, detective stories, social dramas, even musicals. As film critic Richard Schickel says on a commentary track for Rio Bravo, Hawks liked saying 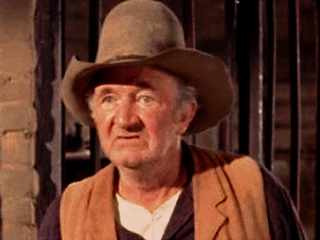 that he loved to steal from himself. He'd do it again by practically remaking Rio Bravo as El Dorado eight years later, once again starring Wayne but with Robert Mitchum in the Dean Martin role. The plots diverge enough, as do the characters, (Mitchum plays a drunken sheriff as opposed to deputy while Wayne took on the role of gunfighter for hire helping a rancher's family get even with the rival rancher who killed their patriarch) to prevent it from being an exact facsimile. (Another shared aspect between the two films: screenwriter Leigh Brackett, who co-wrote Rio Bravo with Jules Furthman and wrote El Dorado by herself.) In the case of Rio Bravo, dialogue in the romantic sparring between Chance (Wayne) and possibly shady lady Feathers (Angie Dickinson) sounds lifted directly from To Have and Have Not, which Furthman co-wrote with William Faulkner. The relationship between Chance and Stumpy seems like a continuation of the one Wayne's Dunson and Brennan's Groot had in Red River, only minus Dunson's darkness. Part of Howard Hawks' greatness grew from his gift of swiping things from his previous films while changing the recipe just enough to make it fresh — a skill other self-plagiarists such as John Hughes never pulled off since they lacked Hawks' inherent talent, skill and imagination.

Hawks originally intended the action and imagery that runs beneath the opening credits to be its own sequence in the film, but later decided just to use it to accompany the list of cast and crew to a quieter piece of Dimitri Tiomkin's score before the set piece in the bar officially launches Rio Bravo. He films the footage of a wagon train caravan at such a distance that you can't readily identify its contents or characters, but a careful viewer connects it later as being the approach of the wagon train of Pat Wheeler 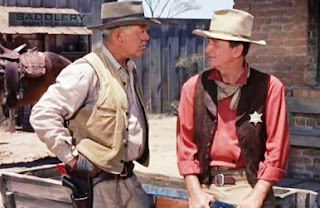 (Ward Bond), who turns up shortly after the opening incident. At first, the audience can't be certain how to take the arrival of this man and his large crew, which includes a young gunman named Colorado (played by Ricky Nelson, teen idol and sitcom star at the time, who turns in a solid performance). For all the audience knows, these could be people sent to break Joe Burdette out of the jail where Stumpy handles most of his supervision. Dude, by then sobered up and handling more of his duties as deputy to Chance's Presidio County Texas sheriff, stops the wagon train in the middle of the town's main thoroughfare and insists that Wheeler and all of his men remove their weapons and hang them on a fence. They'll be free to collect the firearms when they depart the town again. (Wouldn't you love to watch Rio Bravo with the National Rifle Association's head flunky Wayne LaPierre and see how he reacts to law enforcement working for John Wayne in a Western that enforcing those rules?) Wheeler and those in his employ grumble at first, but soon comply. When Chance shows up, we realize he and Wheeler go way back on friendly terms, though Wheeler advises the sheriff they need to be careful where they store their cargo — it contains a large amount of dynamite. (Paging Chekhov if you don't think that's going to pay off somewhere down the road.)