As good as he seems to get anymore 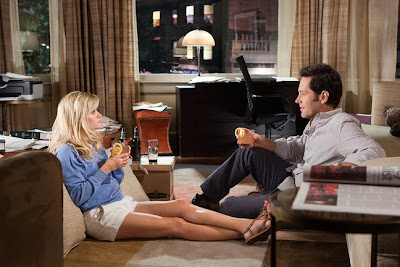 By Edward Copeland
Last year's How Do You Know is the first feature James L. Brooks has written and directed in 23 years that almost works. Actually, I'm just being kind because I still have affection for the man. What the hell happened to him that I have to rate his work now on how much more or less painful than Spanglish it is?

Brooks wrote and directed two of my favorite films, Terms of Endearment and the even better Broadcast News. He also produced films such as Say Anything, The War of the Roses and Bottle Rocket. On television, he co-created The Mary Tyler Moore Show, Taxi and The Simpsons.

So went wrong? It's not that the movies he's made since 1987 were without charms. I enjoyed many parts of the de-musicalized I'll Do Anything starring Nick Nolte, but it was a miss (even though I'd still love to see those cut musical numbers. DVDs were invented for extras like that.)

As Good As It Gets had very good performances by Jack Nicholson and Greg Kinnear, but the storyline was very unfocused and the film as a whole was sunk when it hit the iceberg known as Helen Hunt's Oscar-winning performance, with its Bronx accent that would appear, then disappear, then reappear, then turn into some other sort of accent altogether. Supposedly, the point was that her character makes Nicholson's a better man. Honestly, I imagine she would add to his mental problems.

Then came Spanglish. Adam Sandler is unbearable enough in his comedies that give lowbrow a bad name, but somehow he becomes even worse when he tries to play it straight and serious as he does in Spanglish. What makes this mess of a movie even more of an amazing achievement (in a negative way) is that Sandler isn't its most annoying character. That title goes to Tea Leoni as Sandler's messed-up wife Deborah who fluctuates between shrew, politically concerned citizen, manic depressive and so many other troublesome traits I'm surprised her character wasn't named Sybil.

Coming from Brooks, who created or brought to the big and small screen so many great female characters such as Holly Hunter's Jane Craig in Broadcast News, Shirley MacLaine and Debra Winger's Aurora and Emma in Terms of Endearment and Mary Tyler Moore and Valerie Harper's Mary Richards and Rhoda Morgenstern on The Mary Tyler Moore Show and Rhoda, to name a few. As A.O. Scott wrote in his review of Spanglish, describing Leoni's Deborah:

...Deborah, a creature whose flailing awfulness goes beyond the requirements of comic villainy and exposes an ugly, punitive strain of misogyny at the heart of a movie that basks in its own sense of decency. Coming from Mr. Brooks, this is more than a little shocking, since strong, interesting, complicated women have been something of a specialty for him.

The longer you get away from your viewing of How Do You Know, the more it dissipates in your mind, but while you watch it, it's pleasant and entertaining enough not to cause the viewer anguish. Much of the credit for this shouldn't go to Brooks' screenplay, but to the charming presences of stars Reese Witherspoon, Owen Wilson and, most particularly, Paul Rudd.

Rudd and Witherspoon really have the lead roles of How Do You Know in parts that run on parallel tracks for much of the film while Wilson serves a mostly supporting function.

Witherspoon stars as Lisa, a legendary member of the U.S. Olympic softball team, but she's aging (all of 31!) and though she's worshipped by her younger teammates, the new coach (Dean Norris, Hank on "I can't wait until July" Breaking Bad) decides it's time to cut her loose. On the rebound. she throws herself into dating Matty (Wilson), a hugely successful Major League Baseball player who always offers a fun time but who doesn't seem to have an idea about the concept of monogamy.

Rudd plays George, who has the top job at his father Charles' financial firm, though one gets the impression that George functions largely as a figurehead while those below him and his father (Jack Nicholson) above do the heavy lifting. This changes when he's hit with a federal subpoena indicating that George may be the target of a criminal investigation. The screenplay keeps the details very sketchy but it's obvious early on who is really responsible for wrongdoing, especially by the constant hints his very pregnant assistant Annie (Kathryn Hahn) keeps trying to make.

The unraveling of George's life does serve as a catalyst for him to start doing things differently, especially after his girlfriend (Shelley Conn), who never had any interest in his life anyway, dumps him when his legal problems start, promising to return when they are over.

What starts as a strange call where George apologizes to Lisa for not calling to ask her out because a mutual friend gave him her number later turns into the predictable platonic path between the two as Lisa tries hard to make it work with Matty. The steps of the film aren't surprising in the least and Brooks really doesn't come up with any lines close to the classics he produced in his first two films as a director, but Rudd, Witherspoon and Wilson make it watchable. (Hahn deserves kudos as well.)

Nicholson, who remains one of my all-time favorites and has been served well by Brooks, who directed him to two Oscar wins and a fun extended cameo in Broadcast News, seems adrift in How Do You Know. Except for his speech that was played to overkill in ads and trailers about how he can't trust himself not to manipulate his son and that he could be doing it right then.

Rudd, who finally broke out once he pretty much devoted himself as a comic actor, keeps How Do You Know going. He can get laughs just from facial expressions, as if his face were made of rubber. Witherspoon and Wilson also have moments, but Rudd helps you forget while you watch that you know everything that is going to happen and the film lacks inspiration.

I've already forgotten most of How Do You Know and it's highly unlikely that I'll ever see it again, but at least it's no Spanglish.

Comments:
Don't get me started on Helen Hunt's Oscar-winning performance. I am curious about this film, but don't understand what happend to Brooks. Thanks, Ed.