From the Vault: War of the Roses 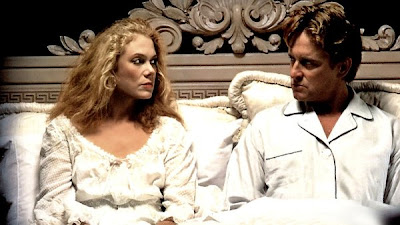 Sometimes a movie can be so unblinking in its vision that it enthralls and shocks a viewer when it fails to renege on its premise. Thank goodness that War of the Roses maintains its dark tone until the bitter end.

War of the Roses reunites Michael Douglas, Kathleen Turner and Danny DeVito from Romancing the Stone and Jewel of the Nile, but this film is not a sequel to those two films in any way. Unlike those light comic romps, Roses looks at divorce with a dark comic edge that's constantly teetering on the edge of horror.

Douglas and Turner play Oliver and Barbara Rose, a couple who have spent several happy years together until things start to fall apart. No affairs or addictions cause the friction, just a slow grinding of personalities that have grown incompatible.

The film rejects a dramatic or tragic take on the situation, opting for a moody vein as the spouses, once in love, become warring enemies. What's astounding about the movie is that it doesn't take sides: neither character comes off as a hero or a villain. Neither can shoulder the bulk of the blame for the rupture as both prove equally petty once the legal proceedings begin.

DeVito's character Gavin D'Amato, Oliver's lawyer friend, narrates the story, presenting it as a cautionary tale to a prospective client. One would think DeVito playing a lawyer would assure another take on his patented slimeball character, but Gavin's lawyer actually has ethics.

Douglas plays his role for more comic effect, taking delight in the games, still believing that Turner still loves him. On the other hand, Turner attacks her role with a vengeance. She begins as a sweet, slightly ignorant wife and transforms into a bitter vixen determined to hang on to the house she feels responsible for building and decorating.

The house becomes the focal point of the fight and its intricate design helps move the film along by providing fascinating backgrounds for the scenes. DeVito also directed the movie, adapted from Warren Adler's novel. DeVito cut his feature film teeth on Throw Momma From the Train, a reputed black comedy. Whereas Momma copped out on its premise and proved ultimately harmless, Roses never flinches.

DeVito, more assured in his direction this time around, augments the brutal story with unusual angles and a surrealistic look. At times, it is incomprehensible that the couple can treat each other any worse but they do and with each step the film takes into the dark side, the better it gets. Toward the end, one awaits the film to pull back or a light surprise, but it doesn't happen.

The film's weakest parts come early with the frequent cutting back to DeVito in his office, telling the story. However, this device ends up being necessary and helps strengthen the surprise of its ending.