“What’s the Spanish word for straitjacket?” 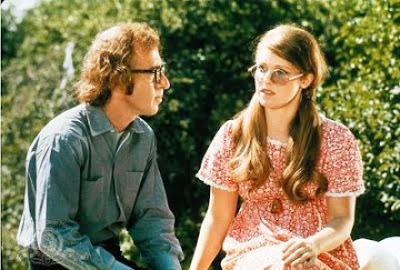 By Ivan G. Shreve, Jr.
In Hannah and Her Sisters, Woody Allen’s hypochrondriacal Mickey spends much of the movie’s running time obsessed with death (after a momentary medical checkup scare that subsequently results in a clean bill of health) and even considers committing suicide before he chances onto a movie theater that’s showing the 1933 comedy classic Duck Soup starring Groucho, Chico, Harpo and Zeppo — the Marx Brothers. Coming in during the film’s “The Country’s Going to War” musical number, he is so entertained by what’s onscreen that he gradually realizes that although life is too short it’s long enough to enjoy simple pleasures such as good music, New York’s architecture, funny films and, ultimately, the love of his girlfriend Holly (Dianne Wiest).

I was fortunate enough to see Hannah on the big screen when it came out in 1986 and remember that I, too, experienced joy out of seeing the Marx Brothers’ “cameo” in the film — though it probably shouldn’t have been too surprising as Allen himself has admitted on countless occasions in the past that he’s quite the “Marxist” (particularly a fan of Groucho). But what I found amusing about the Duck Soup homage in Hannah is that it reminded me of one of Allen’s “earlier, funny films” in which the Woodman also genuflects at the altar of his comedic idols. The Marxes had their Cocoanuts and Woody Allen had his Bananas (1971) — released 40 years ago to theaters on this day.

Allen explained at the time of Bananas’ release that he titled the movie in such a fashion “because there are no bananas in it.” (However, in the novel that inspired the movie, Don Quixote, U.S.A., the protagonist is an agronomist whose field of specialty is the titular fruit.) But it’s almost impossible not to see the Marx Brothers connection in a film that, like Duck Soup, also satirizes the stupidity of war and conflict while lampooning political and social conventions. Woody plays Fielding Mellish, a product tester, who makes the acquaintance of student and political activist Nancy (Louise Lasser) when she knocks on the door of his apartment to ask if he’ll consider signing a petition condemning the dictatorship in the Latin American country of San Marcos. Because the apolitical Fielding has romantic designs on Nancy, he volunteers to participate in many of her personal causes but when, after dating a short while, she dumps him, he despondently decides to travel to San Marcos in the hopes of sorting his life out.

San Marcos’ most undemocratically elected leader (he deposed the previous president in a riotous sequence that starts the film, in which the assassination is broadcast by sportscaster Howard Cosell) General Emilio Vargas (Carlos Montalban, the older brother of Ricardo) has learned of Fielding’s visit to his country and invites him to dinner for good food and stimulating intellectual conversation. Vargas’ ulterior motive is to have Mellish killed by his own men disguised as the general’s opposition in order to put the rebel movement in bad odor with the U.S.A. Rescued by the rebels before he is murdered by Vargas’ men, Fielding joins up with the opposition (even though his home country has been told he’s dead) and helps them overthrow Vargas. However, the new leader, Esposito (Jacobo Morales), turns out to be just as bad as Vargas (“…all citizens will be required to change their underwear every half-hour…underwear will be worn on the outside so we can check.”) and so Esposito’s men tab Fielding as the new “el Presidente.”

Fielding takes power but because San Marcos is financially strapped he decides to make a diplomatic visit to the United States in an effort to do a little fund-raising and score some federal aid — and because everyone believes him to be dead, Fielding disguises himself (in one of the most unconvincing beards in the history of film). Back in his own country, he meets up again with Nancy and, because she doesn’t recognize him, she declares her crush on him — the couple winds up in the sack and Fielding reveals his identity, much to her disillusionment. Meanwhile, the FBI has pieced together the puzzle that is San Marcos’ leader and because of Fielding’s past “subversive activities” the U.S. government puts Mellish on trial. The verdict returned finds Fielding guilty of 12 counts of treason but when the judge suspends the sentence (in return for Mellish’s promise not to move into his neighborhood) our hero is free to marry the girl he loves — and the consummation of their marriage on their honeymoon night also gets the Wide World of Sports treatment with Cosell once again doing play-by-play.

Someone much savvier than I once posited that Woody Allen’s Annie Hall and Manhattan were the two “litmus tests” in the actor-writer-director’s oeuvre: fans of the first film preferred his earlier movies while devotees of the latter appreciate the maturity of Woody’s later works. Which sort of makes me the odd man out: Manhattan is my favorite film of Allen’s but I find I gravitate to those movies he made earlier in his career when I’m in the mood to watch him. By his own admission, Bananas “was still a film where I only cared about being funny. I wanted to make sure that everything was funny and fast-paced.” And that’s precisely what Bananas is, nothing more, nothing less: a slapdash, formless film that concentrates on one-liners, sight gags and slapstick at the expense of sophisticated character comedy.

The influence of the Marx Brothers permeates Bananas from stem to stern: Woody’s Mellish hears harp music in his hotel room and opens a closet door to find a harpist practicing; later a semi-nude woman runs through the rebels’ camp shrieking that her exposed breast has been snake-bit…which prompts Fielding and the rest to chase after her, Harpo-style. The courtroom scene in Bananas was, according to Allen, staged because he didn’t have the money to film a chase sequence — but again, you can’t discount that the proceedings have a distinct Marxian flavor, including Woody’s classic observation: “I object, your honor! This trial is a travesty! It's a travesty of a mockery of a sham of a mockery of a travesty of two mockeries of a sham…”

The Marx Brothers aren’t the only influence on Allen in Bananas — you can detect Woody’s love of silent comedy (the subway sequence is accompanied by a silent film piano) with homages to Chaplin (the “Excusizor” could be a cousin of the self-feeding apparatus in Modern Times), Keaton (Fielding is tying a blindfold around a man to be executed and gets his finger caught in the knot) and Harold Lloyd (Lloyd also made a movie about a naïf loose in a Latin American country, 1923’s Why Worry). Allen would tithe further to Lloyd and silent comedies in his science-fiction spoof Sleeper, and if you listen closely while watching Bananas you’ll hear the same anthem that Diane Keaton’s character warbles in that film: “Rebels are we/Born to be free/Just like the fish in the sea…” Woody also has acknowledged a debt in the past to Bob Hope and his cinematic persona: Mellish, a man who brags about his lovemaking prowess and cowers at the first hint of danger (what Leslie Halliwell once called Hope’s “cowardly custard” shtick), nevertheless is as quick with the quips as Bob

NANCY: You're immature, Fielding...
FIELDING: How am I immature?
NANCY: Well, emotionally, sexually, and intellectually...
FIELDING: Yeah, but what other ways?

FIELDING: When is the revolution?
ESPOSITO: Six months...
FIELDING: Six months? I have a rented car!

Bananas has a loose, improvisational feel to it and indeed, many of the bits were off the cuff (Allen has remarked that he’d set up the camera, do the scene and move quickly to the next one), notably Cosell’s dialogue as he describes the events of the assassination and Fielding and Nancy’s coupling (in the manner of a boxing match). (Allen jokingly calls Howard in the trailer for Bananas “one of the great, great dramatic actors who comes from the Elizabethan stage.”) The inspired gag of the chamber music being mimed during the dinner at Vargas’ was born out of necessity when the rental company supplying the instruments arrived too late to film the scene.

Allen co-wrote the screenplay with his childhood pal Mickey Rose in just two weeks, and composer Marvin Hamlisch is guilty of the catchy theme music that permeates the film (the Spanish tune is called “Quiero la Noche” and the English version “Cause I Believe in Loving”). Fans of classic television and character actors (that’s me) will delight at seeing such familiar faces as Dan Frazier (Capt. Frank McNeil of Kojak fame; he’s the priest in one of my favorite gags in the film, the New Testament Cigarettes ad [“I smoke ‘em…He smokes ‘em’]), René Enríquez (Lt. Ray Calletano on Hill Street Blues) and the Diff’rent Strokes triumvirate of Conrad Bain (as one of the executives in the “Excusizor” scene), Charlotte Rae (as Fielding’s mom, under the surgical mask) and Mary Jo Catlett (as one of the spectators in the hotel lobby toward the film’s end). Joining Cosell are real-life (at the time) media personalities Don Dunphy and Roger Grimsby — but perhaps the biggest unknown in the film is Sylvester “Rocky” Stallone, who plays one of the thugs in the subway sequence.

Despite its scattershot nature, Bananas remains one of Woody Allen’s best outings — mixing slapstick and one-liners among his traditional humorous observations on politics, sexuality, literature and philosophy. Watching it again the other night I was struck by how in many ways it’s like the Airplane! of Woody films, what with its wild visual humor and non sequiturs (a lot of funny business going on in the background — I love the bit with the food taster). It’s a film from a time when the Woodman wasn’t interested in having upper-class academics banter pretentiously (yes, I haven’t forgot that I still love Manhattan) but instead wanted to make people laugh themselves silly. It’s one of my favorite Allen films and it’s taught me many things about life — none more important than when you are invited to dinner with a dictator it’s necessary to bring a cake.

Comments:
I don't know where I stand since I love his "early, funny films" and prefer Annie Hall to Manhattan but also worship his later stuff (through 1989 at least, then only a couple since he's been in his long slump) and my favorite Allen film of all is The Purple Rose of Cairo. Bananas is great fun, but he improved with each one. I liked Sleeper better and Love and Death most of all.

Whenever I see one of the early films, I get the feeling that all the characters are speaking with Woody's voice, so the effect is like seeing a dramatization of one of his standup routines.

I want to bugger Miley Cyrus.