Superb acting in any language 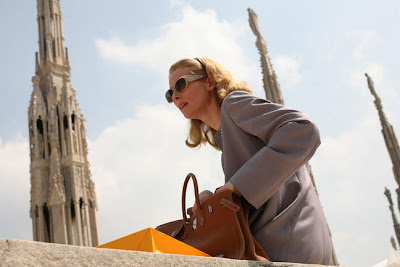 By Edward Copeland
Last year, one of the very best performances by an actress was given by Tilda Swinton in Julia, which I unfortunately didn't get to write about because I saw it during my doctor-ordered hiatus from this blog. She gave a frenetic, frazzled portrait of a woman over her head and should have received more recognition than she did. Swinton has done it again in 2010 in a film in which she not only stars but which she helped to produce and if that weren't impressive enough, her work in I Am Love is in Italian.

Whereas in last year's Julia, Swinton's title character was marvelously out of control as she made bad decision after bad decision when she became involved in what she thought was a "humanitarian" kidnapping scheme would help her money problems, but it didn't ease her substance abuse troubles. Swinton swung for the fences and hit a home run with her performance.

In I Am Love, Swinton goes the opposite direction. She's almost silent, even when her passions get the better of her, as Emma Recchi, who said she gave up her Russian identity when she married her Italian husband Tancredi (Pippo Delbono) and became absorbed into his large and boisterous Italian business family.

While the true Italian Recchis tend to be more judgmental, Emma is the one who earns the trust of her now-grown children because she doesn't cast aspersions on their lives or dreams, be it her son Edoardo (Flavio Parenti) and his desire to open a restaurant with his friend Antonio (Edoardo Gabbriellini) or her daughter Betta (Alba Rohrwacher) coming out as a lesbian.

However, not all of the family feels as gracious toward Emma when she finds herself falling for the much younger Antonio, an affair that leads to unexpected tragedy. However, the scene where Emma makes her decision after confessing to Tancredi, a scene played in near silence, first between Emma and her maid and then between Swinton and Rohrwacher is breathtaking as is all of Swinton's work here.

The film itself, directed by Luca Guadagnino who also wrote the story and co-wrote the script with three others, isn't quite as good as Swinton's performance. It takes quite a while for I Am Love to get revved up and its leisurely pace almost becomes a crawl.

If it weren't for Swinton's brilliant and subdued work (in Italian, remember), I Am Love probably wouldn't work at all, but her work almost belongs in a silent film: Her face expresses so much without words. Swinton makes the experience worthwhile.

Comments:
When you look down the list of Tilda Swinton's film credits - to name only a handful, Orlando, Wittgenstein, Edward II, The Deep End, Young Adam, The Chronicles of Narnia, Julia and now I am Love - what emerges is perhaps the most interesting, idiosyncratic and challenging bodies of work of any actress in contemporary cinema. If she can keep this up, the results will continue to confound expectation(and that's a good thing). I like a lot of modern actors - but I can't say that many of them surprise me with the same degree of consistency.