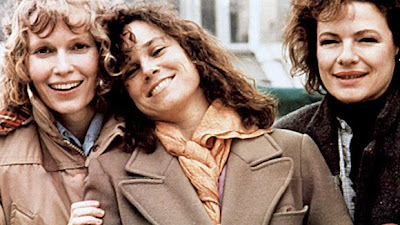 By Jonathan Pacheco
"God, she's beautiful," Elliot says, welcoming us into his months-long infatuation with his sister-in-law. Weak at the knees at just the smell of his wife's youngest sister, it won't be long before he indulges his pining and horniness. Misleadingly titled, Hannah and Her Sisters isn't really about Hannah (Mia Farrow), the rock of her wealthy, successful family and an overall supportive older sibling and wife. Rather, Woody Allen's 25 year-old film concerns itself more with Hannah's husband Elliot (Michael Caine), who can't take his lustful eyes off Lee (Barbara Hershey), his wife's intelligent, cultured, but willingly impressionable sister. Meanwhile, Holly (Dianne Wiest), a year removed from a coke addiction and suffering from a bad case of middle child syndrome, needs another loan from Hannah to fund her new catering venture, started to support her floundering acting career. And then there's Allen himself in the tonally contrasting role of Mickey, a TV producer, intense hypochondriac and Hannah's ex-husband.

Mickey's run-in with mortality seemingly has little to do with the film's other stories of marital dissatisfaction and sibling rivalry. A decidedly more "comedic" thread when compared to the subtler ones of Elliot, Lee and Holly, Mickey's arc, instead of throwing off the film's balance, somehow manages to counter the weight of the other three plots all by itself while keeping in line thematically, despite my instincts insisting on the contrary. That's because my initial perceptions of Hannah and Her Sisters, as with my initial assumptions about its title, were a bit off. Its biggest themes don't reside in the realms of marital strife or personal insecurities, but rather in the ideas of acceptance and inevitability — funnily enough, best represented in this film by Mickey's suddenly fitting story.

But before acceptance, these characters have the desperate desire to change who they are, where they're at, and where they're going. Other reviews and summaries will tell you that Elliot's decision to give up on his relationship with Hannah stems from his frustration with her self-sufficiency, but that's not quite the truth. Yes, Hannah is a strong, capable, independent character, and Elliot does indeed love the feeling of "teaching" and "molding" the younger Lee (much like Alvy sought to mold Annie in Annie Hall), but I don't think that drove him to have an affair. Men obsessed with the idea of being with another woman will find an excuse to be "driven away." They'll take a relationship issue that, under normal circumstances, would be "something to work on" — "she can be a bit clingy," "sometimes it's nice to feel needed," "I wish she'd show a little more physical affection" — and turn it into a dealbreaker — "you're suffocating me," "you're too perfect and self-sufficient, and I'm useless to you," "you're a cold, frigid woman!" When Elliot yells at Hannah for being too self-sufficient and too perfect, it sounds like a husband finding a crack in the marriage and trying to chisel his way out through it.

We see this character over and over in Allen's films (as recently as Josh Brolin's Roy in 2010's You Will Meet a Tall Dark Stranger). He's easy to spot, as he's typically combined with the iconic "neurotic Woody Allen" persona we hear about ad nauseum. However, the director has stated that he sees most every character as representing parts of himself, quite evidently in Hannah and Her Sisters. Mickey's paralyzing paranoia as well as Elliot's overpowering lustfulness and weakness of character are traits most commonly associated with Allen. But even in Lee we see his desire for sexual and intellectual stimulation and his thirst for culture (despite coming across as a simple "Marx Brothers and New York Knicks" kind of guy, we know that Allen's interest run somewhat deeper; he was inspired to write this film after a reading of Anna Karenina, and the film itself deliberately shows traces of Fanny and Alexander and Three Sisters). Holly embodies not only Allen's insecurities but his ability as a director to move from project to project, willing and sometimes desperate to try something different. When Holly thinks it a good idea to audition for a musical, I saw visions of Everyone Says I Love You.

Holly, to me, is the most interesting role of the bunch because her life revolves around not coming in first. She deals with the insecurities of being a middle child sandwiched between two "superior" women in almost every respect. Hannah has an angelic beauty, a marriage, a beautiful home, several kids, and even a successful acting career after an acclaimed stage turn as Nora in A Doll's House. Lee has youth, looks, intelligence, and a bright future. Meanwhile, Holly, not quite "the looker" that her sisters are, takes a sloppy-seconds flyer on Hannah's ex-husband Mickey, struggles from audition to audition, jumps from side-career to side-career and requires Hannah's financial help (which she's all-too-willing to provide) in every endeavor. Her partner in catering, April (Carrie Fisher), also is an actress and a friend to Holly — a friend who, like Hannah and Lee, seems to best her in every category. Notice the scene where David (Sam Waterston), a patron at a party Holly caters, comes back into the kitchen, raving about the food. Holly and April are intent on being clear regarding which dishes were created by them individually. The Holly-David-April love triangle continues in a painfully amusing game of one-upmanship as the two women vie for this architect's interest. The story of her life, Holly doesn't win that particular competition.

No, it's not until she accepts her "never first" lot in life that she finds peace and success. A failure at her first career choice, she discovers an interest and talent in writing, with Mickey wanting to produce her second script — not the one based on Elliot and Hannah's relationship, but the one based on her own life and experiences. Soon, she accepts the idea of a relationship with the man who wasn't good enough for her "superior" sister, and in it she finds happiness (and in turn, makes him happier than he ever was).

Before they can be at peace, all these characters must realize that their lives are not going to change into the different ones they want or envisioned. Embracing the lives they've already chosen (or have been given) is the key, in Woody Allen's mind. Elliot and Lee both have to realize that their affair always will be just an affair. Lee understands this first and moves onto another relationship. Elliot must also accept that Hannah is the wife he's chosen, and she never will be the dependent, impressionable "student" Lee is to her mates. Hannah's strong and capable...Is that such a bad thing? And Mickey's seemingly disconnected troubles, in this light, now fit perfectly into the film's thematic motif. His long struggle with mortality and existentialism ultimately leads him to accept that life may be meaningless, and it very well may be permanently over once you die. But if you choose to embrace the situation, well, there's a whole lot about life that still makes it worth living.

Comments:
I must have seen this three times in the theater when it originally came out. I loved it. Can't believe you didn't toss in something about Max von Sydow's character.

Honestly, I don't know if I have anything of substance to say about his character (despite really liking his performance and always being in love with the man's voice). Though, he definitely has some of those typically attributed "Woody Allen characteristics," namely his disdain for the extremely low-brow (wrestling) as well as his general desire to avoid people....

Love this film also, esp. the scene where Woody learns he isn't ill and starts dancing down the street only to stop when he thinks of something else that could be wrong.