You will see Woody go through the motions — again 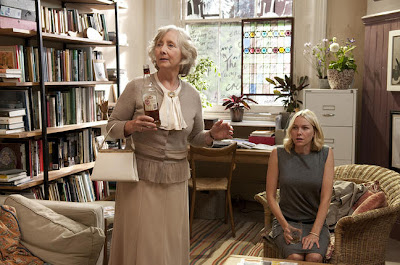 By Edward Copeland
At the outset of Woody Allen's You Will Meet a Tall Dark Stranger, the film's omniscient narrator (Zak Orth) quotes Shakespeare's famous MacBeth line about life being full of sound and fury, signifying nothing. It's hardly the only thing that's familiar about the movie, but it is one of the few steals that receives an audible footnote.

Sadly, You Will Meet a Tall Dark Stranger begins as if it might be a good one. Perhaps it's the fact that it opened with so little noise that my expectations were nonexistent or maybe those tried-but-true white-on-black opening credits still contain enough juice to transport me back to the days when a new Woody Allen film almost inevitably meant you were about to see something worthwhile.

Unfortunately, the longer the film goes on, the more it seems as if Woody has concocted another time waster without purpose. He still assembles talented and interesting casts, but it ends up playing like another case of a writer-director who has simply run out of things to say.

Like most of his recent films, Allen sets his latest relationship comedy in a European locale, this time returning to London. You can change the buildings, the cities — even the accents — but it's becoming clear that you can't teach this old filmmaker new tricks. This isn't the case with all directors who have entered their golden years. (Look no further than Alain Resnais' Wild Grass. Better yet, perhaps Woody Allen should, for inspiration if nothing else.)

The title refers to forecasts that Helena (Gemma Jones, who gives the film's best performance) gets from a fake fortune teller (Pauline Collins) to help her cope after her husband Alfie (Anthony Hopkins) divorces her in a few-decades-too-late midlife crisis. Their daughter Sally (Naomi Watts) indulges Helena, even though it drives Sally's husband Roy (Josh Brolin) crazy. "She needs medicine, not illusions," Roy tells his wife.

Roy isn't on firm ground realitywise either. He completed medical school but instead of becoming a doctor, decided he was meant to write. After one successful novel though, he's just spent years rewriting and struggling to re-create the feat with dense and unreadable followups. He also has become obsessed with the guitar-playing beauty (Freida Pinto) he spies from his apartment window.

Tired of depending on her overbearing mother to pay their bills, Sally takes on a job as assistant to an art gallery owner (Antonio Banderas) whom she develops a crush on when she hears he's unhappily married. Meanwhile, her father impulsively marries a young golddigger (Lucy Punch), who seems as if she's a knockoff of Mira Sorvino's Mighty Aphrodite character, only swapping ditzy charm for hateful spite and lacking any humorous appeal to make up the difference.

It's all very, very familiar from movies both inside and outside the Woody universe. What's particularly discouraging is that not only is the territory terribly reminiscent of things we've seen before and often, many of the story's turns have been used so frequently in so many stories that most can be seen coming a mile away.

Fortunately, You Will Meet a Tall Dark Stranger is short and doesn't lag much, despite its predictability, though it doesn't have the flow of Woody's best ensemble pieces. Hopkins' storyline in particular, even though his character has close ties to the others, seems as if it's sealed off from the rest of the movie most of the time.

When the film finally wraps, Orth's narrator returns to tell us it's time to close the book on this tale of sound and fury signifying nothing. Of course, the full MacBeth quote says that life is a tale told by an idiot. Woody Allen isn't an idiot, but he is a filmmaker who has been running on fumes for a long time now. He's made so many great films that I still dream that he has at least one more great work in him, but with each new film I grow more pessimistic about that possibility.

Comments:
Shame, I'm very disappointed, as had been looking forward to this movie being really good after all the hype. Thanks for honest review.

Woody Allen is variable - you love some of his movies and you hate others (Hannah and Her Sisters!!). He was due a new movie, but hey, did it have to be like this?

I have heard pretty much nothing but good things about his latest Midnight in Paris but it's yet to cross my path. Except for Whatever Works and Match Point, I think he's been on a long dry spell since Bullets Over Broadway way back in 1994. I hope you aren't implying that you hate Hannah and Her Sisters. That's sacrilege.