Mirror, mirror in the sky 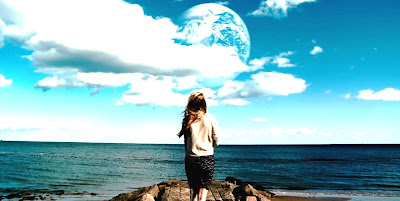 By Edward Copeland
With Another Earth, you're never quite certain what direction the screenplay by director Mike Cahill and lead actress Brit Marling plans to take you. Given the title and the opening moments that detail the approach of a planet which seems to be Earth's twin, you might suspect that a low-budget sci-fi tale is warming up — then Another Earth takes a sudden twist and you realize that it has a much more human story to tell about guilt and redemption and the new planet exists merely as a subplot and metaphor.

When we initially meet Rhoda Williams (Marling), she's a successful high school student celebrating her acceptance to M.I.T. when news comes over the radio about the sudden approach of a planet that resembles Earth in every way. As the inebriated teen takes her eyes off the road momentarily to gaze into the cosmos, she misses a stoplight and slams into another vehicle, killing a mother and her young son and placing her husband (William Mapother) in a coma.

Flash foward four years and Rhoda finishes her prison sentence (though her identity remained secret since she was a juvenile at the time). Rhoda works as a janitor at a school (Wes Anderson regular Kumar Pallana plays one of her co-workers) while she follows the news on what has been named Earth 2, including a contest offered by a superrich entrepreneur for a free trip to the planet. She begins researching what happened to the surviving husband, who eventually came out of his coma. She discovers his name is John Burroughs, once a successful composer and musician who also taught music at Yale.

Rhoda summons enough courage to go to his door with the intention of apologizing for what she did, but she chickens out at the last moment and claims to be from a cleaning service offering a trial of their service which Burroughs accepts. Her cleaning becomes a regular gig, though she rips up the checks he gives her. A warm relationship develops between the two, making it even more difficult for Rhoda to share her horrible secret.

More research on Earth 2 reveals that the planet doesn't just look like Earth, it appears to be an exact duplicate, containing the same people, places and things present on the original and the doppelgangers behave exactly the same until they become aware of their twin's existence. The revelation point for Rhoda's secret comes when the essay that she wrote for the contest wins. She shares the news with John, who insists on a celebration — though during the triumphant dinner, Burroughs pleads with Rhoda not to go to space and Rhoda decides to come clean.

Another Earth doesn't break any ground and the film's trajectory isn't hard to predict, but Marling and Mapother give good enough performances to make this quiet film work. It doesn't have anything new to say about guilt or redemption and Earth 2 plays as if it's an excuse to make its simple story seem fresher than it is, but Another Earth doesn't commit any sins that make you roll your eyes or feel as if you've wasted your time.

Marling's solid turn as Rhoda proves all the more impressive given that she co-wrote and co-produced the film as well. Mapother also does nicely in a role unlike anything I've seen him in before. I remember him best as Marisa Tomei's abusive jerk of a husband in In the Bedroom. Checking his credits, it seems he's spent most his time in episodic television, including a recurring role on Lost.

Another Earth isn't a great film, but it does have its moments and I've certainly seen worse.

Comments:
I have this at the top of my Netflix queue.

What about the janitor who blinds himself? It was so absurd, I thought I'd heard it wrong.

It is a beautiful and atmospheric film, but I think it crumbles under the weight of its metaphors.

I have to be honest -- I must have zoned out on that. I just remembered her visiting him in the hospital, but I assumed he was just old and dying and must have missed them tossing that in. It's probably because every time I saw him I kept thinking of Gene Hackman in The Royal Tenenbaums saying, "Dammit Pagoda -- that's the last time you stab me."